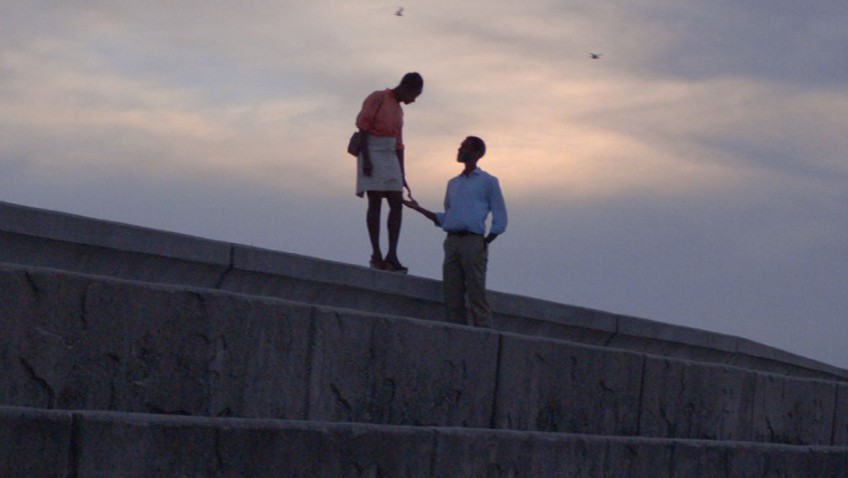 If you are a New Jersey playwright, actor/film producer writing and directing your first, low-budget feature film, Barack and Michelle Obama’s first date might not be an obvious choice.   Whatever the risk, Richard Tanne has pulled it off with Southside with You, a romantic comedy set in Chicago’s South Side, enriched by the kind of dramatic irony that Shakespeare employed so astutely. For while Tanne eschews foreshadowing, we, the audience, know how it all turns out.  Uncanny performances from Tika Sumpter and Parker Sawyers capture the essence of the corporate law intern and his female mentor battling with their idealism, black identities and emotions while a scene-stealing Baskin Robbin ice-cream seals the deal.

‘It’s not a date,’ Michelle Robinson (Sumpter) corrects her mother (Vanessa Bell Calloway), who comments on the amount of time Michelle is spending in front of the mirror.  The declaration serves as a refrain throughout the film, although it’s clear from the way Michelle looks at the young summer Associate who collects her that Michelle is reassuring herself more than convincing anyone else of the nature of their outing. But while Michelle holds back any explicit show of interest that is not professional, Barack (Sawyers) is aware he has one day to make a more personal impression on the woman he is out to get.

Michelle is not just posturing, though. She is 25 and the only black female working as at Chicago corporate law firm Sidley & Austin in the patents department.  At the end of her first year as an Associate, she was appointed mentor to a summer associate, a 27-year-old rising star from Harvard Law School.

There is a hint of rivalry, then, as Michelle had graduated from Harvard Law School the previous year, but all the talk is about this new prodigy. The last thing Michelle wants the partners to think is that she is desperate for the only black man in the firm, particularly given the stigma of supervisors dating their interns.

There is also a bit of defensive resentment, because Michelle is determined not to fall for Obama’s smooth-talking charm offensive, his ironic smile and his swagger. This is the conflict, then, and it is the human barrier that Obama has to break through in the film’s remarkably brisk 81 minute running time. As Janet Jackson’s 1989 hit I Miss You Much blasts in the background, it’s pretty clear Barack is not going to impress Michelle with wealth and status.   She notices the hole in the passenger side flood of his run-down car that smells of the cigarettes Barack is addicted to. ‘This isn’t a date,’ sounds a lot more assured in this setting.

Michelle believes that Barack is taking her to a community meeting in the South Side, a community in the 1980s that is racially diverse and demographically poor. But he’s intentionally picked her far too early for that, and as they visit an Ernie Barnes’ exhibit at an art gallery and get something to eat, they talk about their families, goals and black identities.

They have more in common than they might admit, both having lived in Chicago’s South Side, and both being Harvard Law graduates, brought up with a belief that education was the key to their future.

‘The only thing my father and I had in common was that we both went to Harvard – but he got kicked out,’ Barack confesses. He got behind the wheel of a car and died when he was 46.’ Michelle tells Barack that he has to forgive his father so that you can be better than him’ and admits her supportive father has MS ‘but still gets himself to work every day.’

Michelle is furious at Barack’s audacity to tell her she is wasting her time doing trademark law which she does not care about. It’s clear he has hit a nerve, however, when he reminds her that she worked two years’ pro bono helping mothers and children, so ‘it must be killing you.’

This scene is an important one, not only because it highlights Michelle’s internal conflict (why shouldn’t she earn a lot of money in corporate law?) but because, in an interview, Tanne perceptively describes love as ‘finding that person who makes you a better version of yourself.’

If you are Andy Murray you might impress your date with a game of tennis or your trophies and medals, but Barack, who was a community organiser in Chicago before going to law school, takes Michelle to an old haunt where he gives an inspirational speech before an angry, disillusioned audience. He persuades them that ‘when their needs align with our needs, then you get something done.’

After the speech they meander some more and end up going to see Spike Lee’s brilliant, controversial film, Do the Right Thing, a film that had a profound effect on race relations (The Obamas confirm this online in connection with the film’s 25th anniversary). When they exit, Michelle’s worst nightmare materialises. Her boss at the firm has also seen the film with his wife and approaches the pair.  And of course, he asks the famous question, ‘Why, do you think, does Mookie throw the trash can through the shop window?’ This scene, as well as giving Barack a chance to show off with a clever reply, is an in-joke.  Spike Lee has said that in 25 years, the only people who have ever asked that question have been white.

Sawyers is a dead ringer for Obama and has imbued his dazzling smile, his self-confidence, facial expressions, his walk, his accent and his oratory skills. Sumpter has to work harder as she does not resemble Michelle, except in stature. But she has her speech patterns, her walk and professional reserve down pat.

The pair exude a chemistry that is all the more uncanny as it seems to intensify as the date evolves.  Southside with You might not have the beauty, elegance and magical quality of Richard Linklater’s Before Sunrise, another first-date two hander which it resembles, but Tanne’s first film is certainly as assured as was Barack Obama’s first date.