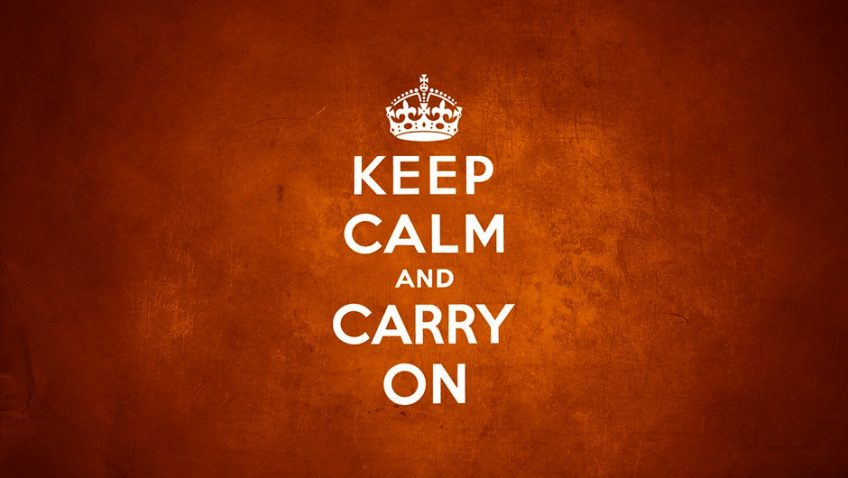 Keep calm and carry on

The recent terrorist atrocities have caused much distress and fear in our country but it is the stoicism and determination of our people that make us resolute in carrying on with our lives and defying the terrorists.

This year we have already seen some appalling acts of terrorism which has led to the threat level being increased and we are all urged to be vigilant and report any security concerns.

There is some concern that information from the public is not being investigated thoroughly and as I write MI5 is to hold an inquiry into the way it dealt with warnings that the Manchester suicide bomber, Salman Abedi, was a potential threat.

The terrorists appear to be determined to instill an atmosphere of fear and intimidation in our country but the response from all corners is that we will not be cowed. Messages of love and support have come in to Manchester from all over the world and we should be proud of the people who have refused to stop and are carrying on with their lives.

By the time this paper reaches most of you readers the General Election will be over and the Government will therefore be able to get on with the job of running our nation.

They have many onerous tasks to carry out including dealing with the NHS, the Care Crisis and of course, Brexit. But for me, the overriding mission is to keep the country safe.

Hopefully without the party-political sniping of recent weeks we can all pull together and focus on National Security.

“Intelligence indicates that a terrorist attack in our country is ‘highly likely’. Experience tells us that the threat comes not just from foreign nationals but also from terrorists born and bred in Britain. It is therefore vital that our counter-terrorism strategy contains a plan to prevent radicalisation and stop would-be terrorists from committing mass murder.”

This is the opening paragraph written by the then Home Secretary, from the Governments PREVENT Strategy which was first presented to Parliament in 2011 and has since been reviewed and updated. At the time of first presentation Theresa May was Home Secretary.

PREVENT is about safeguarding people and communities from the threat of terrorism and is one of the four elements of CONTEST, the Government’s counter-terrorism strategy. It aims to stop people becoming terrorists or supporting terrorism.

The terror prevention and investigation measures (Tpims) regime replaced counter-terror control orders, and can include a range of measures such as enforced curfews of up to 10 hours, tagging, requiring a person to live up to 200 miles from their current address and restrictions on overseas travel. They last for up to two years and are the toughest tool the security services can use against people they believe to be involved in terrorism but who cannot be prosecuted or deported.

The Chancellor Philip Hammond set out the National Cyber Security Strategy 2016-2021 as follows:

“The UK is one of the world’s leading digital nations. Much of our prosperity now depends on our ability to secure our technology, data and networks from the many threats we face.

Yet cyber-attacks are growing more frequent, sophisticated and damaging when they succeed. So we are taking decisive action to protect both our economy and the privacy of UK citizens.

Our National Cyber Security Strategy sets out our plan to make Britain confident, capable and resilient in a fast-moving digital world.

Over the lifetime of this five-year strategy, we will invest £1.9 billion in defending our systems and infrastructure, deterring our adversaries, and developing a whole-society capability – from the biggest companies to the individual citizen.” Intelligence officers from MI5, senior policemen and women from the Metropolitan Police Counter Terrorism Command, the prime minister’s national security adviser and the National Security Secretariat have all been studying what effect, if any, Britain’s departure will have on our security.

The director general of Europol, the pan-EU police force headquartered in The Hague, has expressed grave concerns that Britain’s departure will adversely affect the fight against organised crime, international terrorism and cybercrime.

One of the most emotive and persuasive arguments put forward by supporters of Brexit was that leaving the European Union would allow the UK to regain control of its borders, giving it back control over who it lets into the country.

It also ignores the fact there are an estimated 3,000 British citizens – at the minimum – whom the government is aware of having jihadist connections, contacts and sympathies.

A lot of the counter-terrorism work that takes place we, the public, know little about as it is about intelligence gathering. We do know that since 2012, eighteen separate plots have been foiled but information on current investigations obviously has to be undercover.

The recent atrocity has brought armed soldiers onto the streets to add visible presence of security although the very sight of so many guns can be unsettling in itself.

What can we do?

We can all be more aware of any possible terrorist activity in our area. We can also encourage more integration in local communities and help to make minority groups less marginalised. Above all report anything you may feel is out of the ordinary.

Members of the public should always remain alert to the danger of terrorism and report any suspicious activity to the police on 999 or the anti-terrorist hotline: 0800 789 321.

Keep Calm and Carry on is a much used expression originating from the Second World War, but it is just as relevant today as we show that, as a nation, we cannot be intimated.