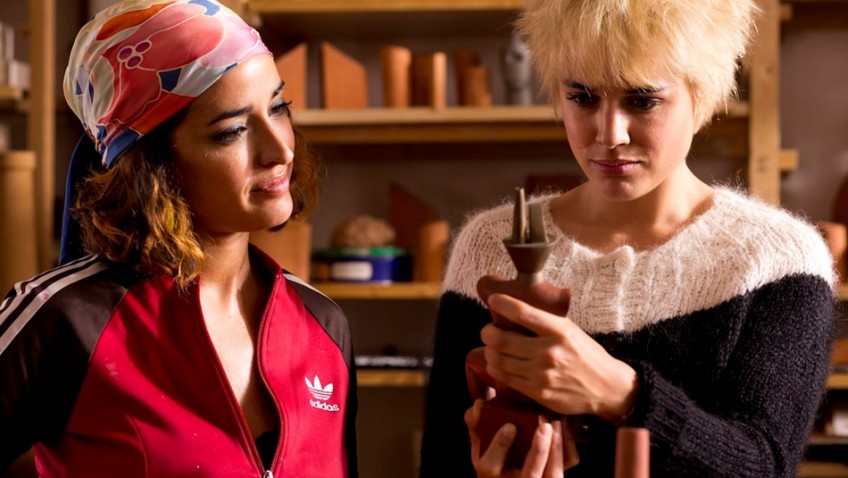 Almodóvar’s study of guilt and loss is a sight for sore eyes.

The great Spanish writer/director Pedro Almodóvar’s last film, I’m So Excited (2013), was a farce featuring camp sketches, most of which take place on a plane journey from hell. The film, based on an original script by Almodóvar, flopped. Almodóvar has answered his fans and critics with Julieta, a riveting, if slow-paced, melodrama about guilt and loss. Based on three linked short stories in Alice Munro’s collection Runaway, the film is so beautifully made that it will brings tears of appreciation to the eyes of cinema lovers. For much of the film, however, it is not the story driving the emotion but the skill of the adaptation.

What is immediately apparent is to what extent Julieta is a reaction to I’m So Excited. The film is not only humourless but the writer/director has returned to his ‘cinema of women’ (Women on the Verge of a Nervous Break Down, Kika, The Flower of my Secret, All About my Mother, etc) with the compelling actresses Emma Suárez and Adriana Ugarte sharing the role of the eponymous protagonist. Recalling his success with two previous adaptations, Live Flesh (by Britain’s Ruth Rendell) and The Skin I Live In (from France’s Thierry Jonquet), Almodóvar has also returned with a remarkably faithful adaptation referred to earlier.

Julieta (Emma Suárez), an attractive, tall, lean blond in her fifties, with barely a wrinkle on her face, is in her almost-empty Madrid flat, choosing which books to take to Portugal where her lover Lorenzo, (Dario Grandinetti), an art scholar, is moving.

In a chance encounter on the street later that day, Julieta is recognised by her daughter Antía’s (Priscilla Delgado) childhood friend Beatriz (Michelle Jenner), now working for Vogue in Milan and New York. Beatriz tells Julieta that she bumped into Antía with her three children in Milan. You can tell from Julieta’s reaction that she had no idea she was a grandmother. Beatriz does not realise that Julieta has been estranged from her daughter since she disappeared at a ‘spiritual retreat’ at the age of 17. At a second chance meeting (there’s a lot of that here) Beatriz confesses that she, too, has been estranged from her former inseparable friend. Beatriz explains that she went to work in the USA to get away from Antía who was suffocating her.

The news that Antía must be living somewhere near the Swiss border (Julieta figures she went to Milan to go shopping for the day) with her three children has a devastating impact on Julieta, re-opening a wound that took many years to heal. Overcome by her need to re-establish contact with Antía, she abandons her plans to leave Madrid. Resolute, she leases a new apartment in the building where she raised Antía, knowing that that address is Antía’s only means of contacting her.

Aware that she owes her daughter an explanation for the events that led to their separation, and eager to inform her daughter of the pain their separation has caused, she writes a long letter to Antía. It is through this letter that we learn how she met Xoan, Antía’s father, and that we witness, in a montage, Julieta’s years of buying birthday cakes for Antía, only to throw them in the bin. The story is constructed less like an extended flash back to the story of 20-something classics teacher Julieta (Adriana Ugarte), than a story about 50-something Julieta looking back on the big hole in her life: a hole that began on a train where a male passenger, desperate for company, attempts to strike up a conversation. Julieta, unwilling to be saddled with a companion for the long journey, leaves the carriage and meets her future husband in the restaurant car. While she becomes infatuated by this handsome fisherman, the desperate stranger who wanted her company is preparing to end his life.

The theme of guilt may be examined much more thoroughly in the three linked short stories (Chance, Soon, Silence) but Almodóvar’s film, with its economy and beauty, is more taut and compelling. The scene in which young Julieta meets Xoan is far more romantic than the meeting in the film, while the scenes with Xoan’s controlling housekeeper Marian (Rossy de Palma) provide the darkness that is missing elsewhere in the film. Here, Xoan’s housekeeper turns into a Spanish Mrs Danvers. As she suggests that Julieta take the next bus back to where she came from, because Xoan is with his lover Ava (Inma Cuesta), and does not need her, we hear echoes of Daphne Du Maurier’s gothic novel, Rebecca and Hitchcock’s adaptation:

You’re overwrought, madam. I’ve opened a window for you. A little air will do you good. Why don’t you go? Why don’t you leave Manderley? He doesn’t need you. He’s got his memories. He doesn’t love you – he wants to be alone again with her.

One of the decisions a director has to make with a story that extends over time is whether to age up one actress with prosthetics, make-up, hair and costume (Almodóvar originally had Meryl Streep in mind), or cast two actresses who look a bit alike. In this case, Almodóvar spared us the cringes that accompany ageing-up, but has left himself with two actresses who are so different (not only in looks but in personalities and mannerisms) that it’s hard to believe one has transformed into another. Fortunately, the stunning, independent-minded Ugarte’s Julieta with the great smile gets the romantic early scenes of teaching and meeting Xoan. She seems a perfect match for Marion, if not for Antía. Still, you can’t quite believe this woman would be happy as a fisherman’s housewife with a domineering housekeeper – when they only have one child. Suárez, on the other hand, seems born to brood in guilt and loss.

The real weak link here, from a psychological and casting point-of-view is Antía. Both the actress who plays her and her underwritten role make it difficult for us to follow the pattern of guilt and then blame, when we learn that Antía knew more than her mother thought. The cult she joins that allegedly alters her way of thinking, is brought up only to be dropped as it is then suggested that Antía had turned her back on her mother before leaving for the retreat.

Never mind about all that! If you can’t make it to the David Hockney exhibit at the RA, you will get your fix of design, bold colours and perfect framing here. Who cares that Xoan’s gray stone gothic villa right on top of a boat-bobbing blue bay is not exactly a fisherman’s hut: it’s a post-card love nest for Julieta and Xoan. And better not ask how, twenty years after the sale of said house, ever-unemployed Julieta can afford the rent on a sprawling flat in a chic quarter of Madrid: it’s a great space for sorrow.