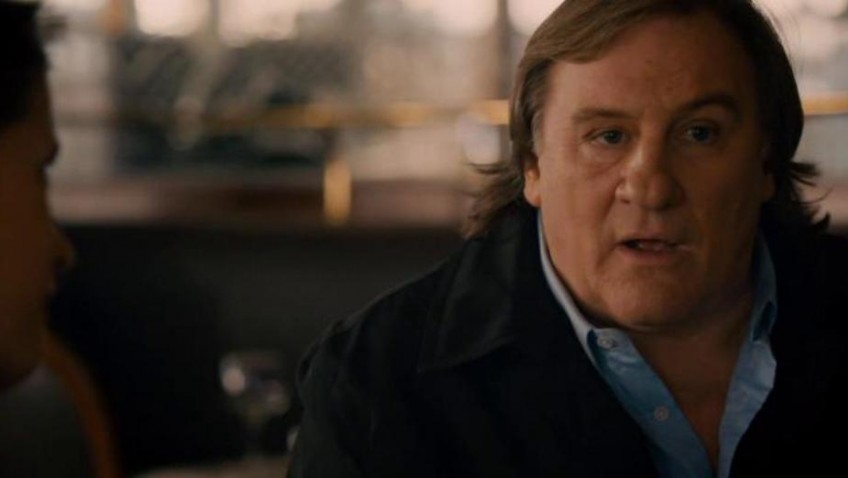 Following is the synopsis from the production notes of Abel Ferrara’s controversial film, Welcome to New York: “Mr Devereaux is a powerful man who controls billions of dollars every day. A man who controls the economic fate of nations. A man who dreams of saving the world and who cannot save himself. A terrified man. A lost man. Watch him fall. “

Like this synopsis, the film not only mixes the facts surrounding the Dominque Strauss-Kahn affair with Ferrara’s and co-writer Chris Zois’s subjective, fictional account, but it is also highly selective in its choice of facts. If this prejudicial mix contributed to the film’s failure to find a distributor in France, it is only one reason why an otherwise well-made and absorbing film, starring Gérard Dépardieu and Jacqueline Bisset, is such a disappointment.

There is no question but that Mr. Devereaux is a sex-addict and that pleasure always comes before work. And this explains why, when he awakens the next morning, he leaps from the shower to attack the first woman he sees. This happens to be an ordinary looking black hotel maid who enters what she believes is a vacant room. Due to Mr Devereaux’s lack of fitness, he only manages to ejaculate on her before she fights him off, running from the room.

In the scenes that follow the subjective camera in the Devereaux rape scene is replaced by the documentary camera that follows the facts of the Strauss-Kahn affair to the letter, lending credibility to the crime. We witness Devereaux being apprehended at JFK just after he has boarded his plane, strip-searched at the police station, denied bail and put in prison and eventually bailed by his wealthy, philanthropic wife, Simone (Bisset), and put under house-arrest in a $60,000/week flat. In subjective mode once again, Simone, who has masterminded and financed her husband’s stellar career, scolds him like a child that he has dashed his chances of becoming the next President of France.

Ferrara’s most famous film is arguably the ground-breaking Bad Lieutenant starring the ‘bad boy’ of American cinema Harvey Keitel. Here, it seems that he is not only out to shock, but to use Depardieu’s reputation as the bad boy of French cinema to further prejudice our attitude to Mr Devereaux.

From a cinematic and dramatic point of view, the film’s main error is showing us the attempted rape of an innocent house keeper. By leaving nothing in doubt, there is nothing for audiences to think about and no possibility of our feeling anything but contempt for the Devereaux family. Moreover, since Ferrara has ignored Strauss-Kahn’s acknowledged intelligence and significant contribution to the International Monetary Fund, presenting Devereaux instead as a mindless pig, there can be little regret at the heights from which he fell, or the loss to the world economy.

Moreover, the facts are so very different that the negative portrayal of Strauss-Kahn and his wife, portrayed as a fund raiser for Israel, has given rise to accusations of anti-Semitism. In 2011, 32-year-old Nafissatou Diallo, a housekeeper at the Sofitel New York Hotel in Manhattan did indeed bring charges of sexual assault and rape against Strauss-Kahn, with whom she had had a brief affair. This caused him to resign from the International Monetary Fund and ended his chances of opposing Sarkozy as President.

However, within a few months, the New York judge formally dismissed all charges against Strauss-Kahn following a recommendation filed by the District Attorney. Diallo’s untruthfulness (she actually retracted her accusation), coupled with evidence of conspiracy to blackmail and defraud and a lackof evidence of force, made the Prosecution’s case untenable. There is no mention of this in the film. Strauss-Kahn nonetheless had to settle a civil suit (although he countersued). In the film, Simone indicates that she spent a million to settle, suggesting that she ‘bought out’ the truth.

Depardieu plays Devereaux, as the part is written: a classless fool and slovenly sex addict with no interest in his work, his position of authority or anything other than sex. It is widely accepted that Dominique Strauss-Kahn is a womanizer, but the portrayal is so exaggerated that it demeans the film and obscures the point of it.