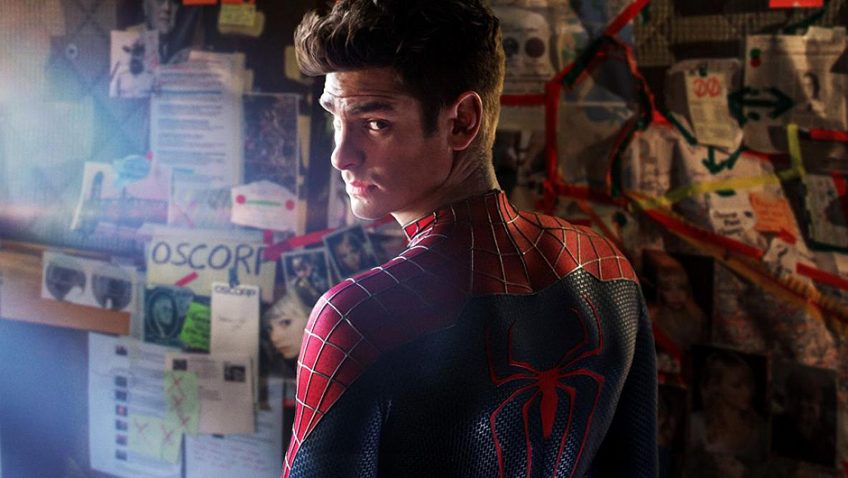 Spider-Man, based on the Marvel comic character, has had a good run in the new Millennium: first with Tobey Maquire and, for the last two feature films, with the British actor Andrew Garfield, so impressive as Eduardo Saverin in The Social Network.

If audiences can identify and emphasise with Spider-Man it’s because we shared Parker’s shock and trepidation as he transformed from ordinary school boy to a strong yet agile insect that could swing from skyscraper to skyscraper using its webs like Tarzan used tree branches. Audiences could also appreciate the conflict between Parker, the teenager whose parents left him with his kind (late) uncle and aunt (Holly Hunter) and the demands made on Spider-Man to save New York City and everyone in it.

, when Parker must choose between his girlfriend, Gwen (Emma Stone, returning from The Amazing Spider-Man

) and his vow to protect the city.   Although the aptly named Director, Marc Webb (The Amazing Spider-Man, 500 Days of Summer), and writers Alex Kurtzman, Roberto Orci and Jeff Pinkner provide Parker with the wherewithal to investigate the disappearance of his parents, he spends too much of the film destroying the city he is meant to be protecting.

Peter Parker misses Gwen’s valedictorian speech and nearly misses his own high school graduation because Spider-Man is involved in a long opening car chase.  Here is a wise-cracking, flippant, self-confident Spider-Man who seems to be having fun saving the city as dozens of NYPD cars are destroyed, officers killed and millions of dollars of damage incurred.

Rushing onto the podium just in time, Peter Parker’s excitement about graduation is tempered by the promise he made to Gwen’s late father, a fallen law enforcer. Much as it pains Peter to break off their relationship, he knows that being with Spider-Man could endanger Gwen’s life.

In addition to the on-off again relationship, the focus of the film is Oscorp, a nefarious corporation run by the late Norman Osborn to fund research into a cure for his terrible disease.  When Parker’s old school mate Harry Osborn (Dane DeHaan) discovers that he has inherited his father’s fatal disease, he thinks that only Spider-Man’s blood will cure him.

Jamie Foxx and Emma Stone in The Amazing Spider-Man 2

Spider-Man refuses to undergo a transfusion because Peter Parker knows that the formula remains  incomplete after his father’s murder and his blood will hasten Harry’s death. Attributing Spider-Man’s refusal as hostility, Harry makes a deal with a rogue former Oscorp employee, Matt Dillon/Electro (Foxx), to kill Spider-Man.

All the characters are connected in some way to Oscorp.  Peter Parker’s father worked there (therein lies the big secret), and despite just having graduated from High School, Gwen appears to be an executive with high level clearance.  Matt Dillon worked there as an overlooked electrician before his electrocution in a work accident was covered up the Board and he was sent to a secure unit for the insane.

Harry now runs Oscorp but, initially determined to clear away the cobwebs, he faced a hostile Board of, stereotypical older and secretive men and women.  After discovering his fatal disease, Harry has ended up a chip off the old block.

has some fun moments, and Garfield is a delight to watch, even if he is upstaged by Dane DeHaan. DeHaan is the intriguing young actor with piercing clear blue eyes who stole every scene from Daniel Radcliffe in the Alan Ginsburg biopic, Kill Your Darlings earlier this year. Andrew Garfield in The Amazing Spider-Man 2

Detracting from the fun are the long, CGI blitzed action sequences, which are not so much tense, as unpleasant to watch and somewhat boring.  Both the opening sequence and Spider-Man’s battle with Electro are so destructive that you wonder whether Spider-Man is out to save the city or destroy it.  The Amazing Spider-Man 2

was shot entirely in New York, a city that experienced real destruction not too long ago and you wonder how much it can take.

Despite their chemistry and youthful appearances, it’s also asking a lot of the audience to accept that Garfield (30) and Stone (26) are just graduating from high school.  It is preposterous to imagine that, however brilliant Gwen is, a 17/18-year-old with a high school science degree could, in a matter of minutes, gain entry to Oscorp, figure out a scheme to juice Electro and restore power to the City