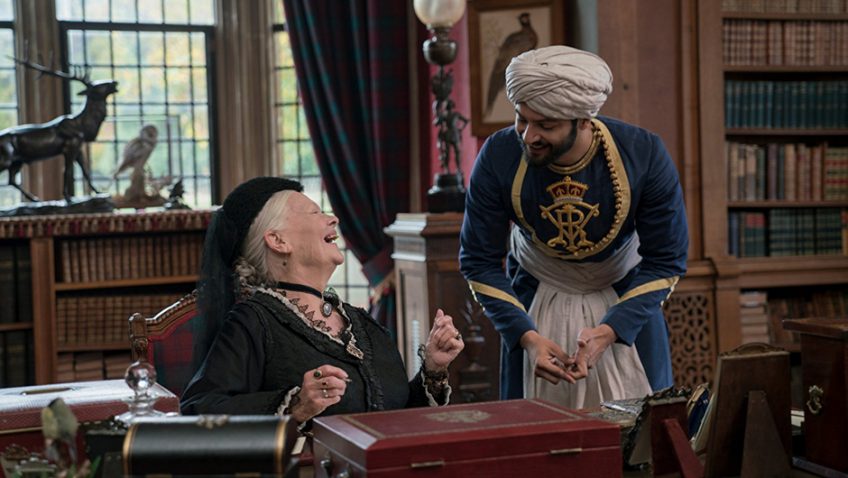 This superb story looks tremendous, but never digs too deep

The monarchy has contributed much to the nation in the form of subjects for television miniseries and films, but few monarchs provide as rich a treasure trove as Queen Victoria. It’s not only her long reign and huge empire. What touches modern audiences is her image as a passionate rebel with a need to escape the confines of her role through love and the pursuit of knowledge. After her crush on Lord Melbourne, her marriage to Prince Albert, Victoria finds happiness again with her Scottish servant as seen in the film Mrs Brown starring Judi Dench. Now Dench is back as Victoria from age 68 until her death at 81 (Dench is 82), to tell the story of her relationship with reverential Muslim clerk, Abdul Karim. Director Stephen Frears tiptoes around the politics to give us a lavish, location hopping, entertaining and thoroughly exportable blend of his previous films: Florence Foster Jenkins, Philomena and The Queen. Victoria and Abdul lays a humorous veneer over the sad and deeply political story that actress Judi Dench wants to tell. 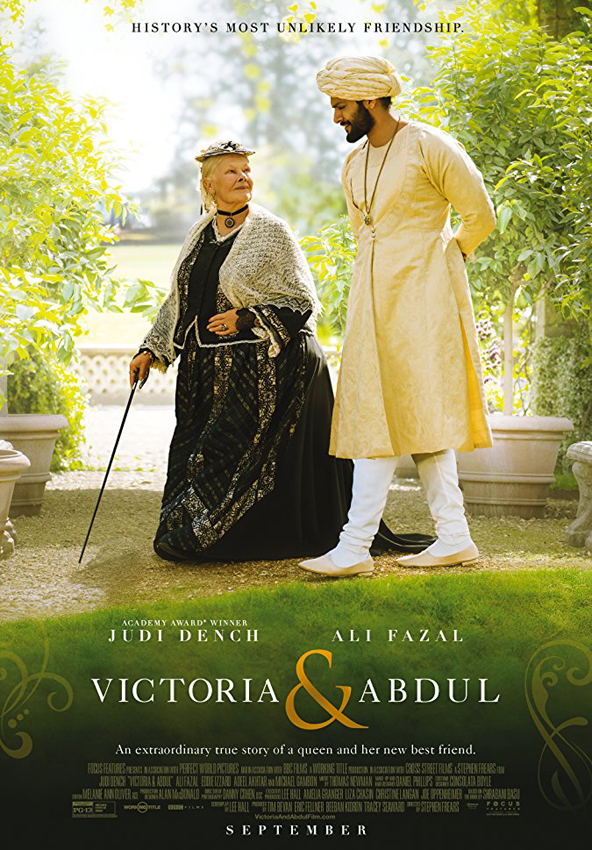 The cutesy opening caption, ‘Based on real events – mostly’ sets the tone of this impeccably researched, handsome production that uses dramatic licence to entertain us. The film begins in Agra, Abdul’s home and the location of the Taj Mahal: the world’s most famous monument to royal love. Later in the film when Abdul tells Victoria how an emperor built the mausoleum for his deceased wife, it strikes a chord with Victoria, who says, ‘how romantic.’ We see how Abdul Karim (Ali Fazal) is plucked from the obscurity of his job as a prison clerk and told he is going to London. He is chosen – primarily for his height and his knowledge of Indian carpets (his father’s job) – to present a ceremonial gold coin to the Queen for her Gold Jubilee.

Try to avoid the spoiler trailer, as Frears’s most innovative idea is to deprive us, the populace, of a close up of the Queen (Dench) until she is seen by Abdul Karim (Ali Fazal). It is 20 June 1887 and we are afforded distant side views of her corpulent frame as she travels from Windsor Castle to Paddington Station and then to Buckingham Palace. Here, we stare at the back of her head as she is being made up, coiffed and briefed on her schedule. When she enters the ornate dining room crammed with royalty and VIPs from around the world, we might see her face front, but no, it’s a long shot and she is a dot almost hidden by her vast entourage. Some of these later turn out to be the stuffed shirts whom she snaps at and humiliates continually as only a woman born to entitlement and fed up with sycophants can do. 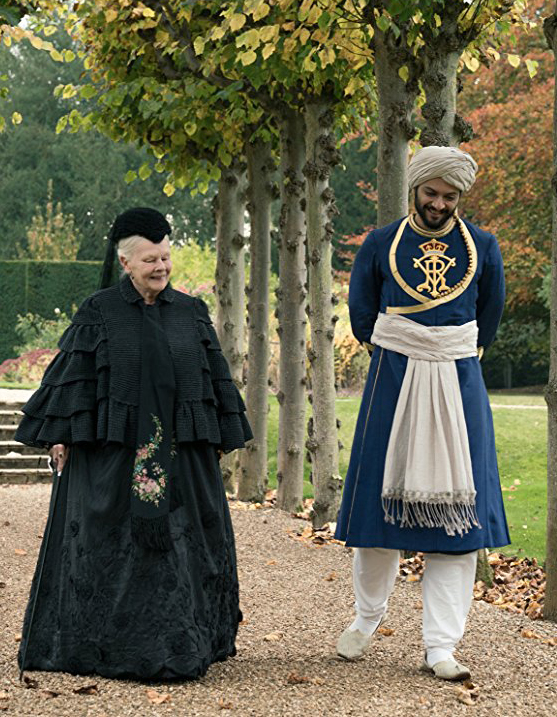 Judi Dench and Ali Fazal in Victoria and Abdul

Karim and the Muslim nationalist uprooted to accompany him, Mohammed (Adeel Akhtar) are repeatedly told that ‘the key to good service is standing still and moving backward. You must not look at her.’ When the moment comes to present the mohur, or coin, the movement is not a problem. We just know, however, that Abdul will not turn to stone when he stares at Medusa, but will liberate her from her metaphorical prison of stone.

But what he, and we see is a bored, obese and wrinkled, old woman (Dench, 82, goes for naturalism) stuffing her face to avoid the eager glances and empty chit-chat. She’s been there, done that. But Abdul sees something else (is it opportunity, or the passionate young girl inside her?). He is smitten and upset protocol by smiling at her. In return, he draws a long buried sparkle from her eyes. The film is all about seeing – not only what you want to see, but what your circumstances allow you to see. Abdul is conditioned by the Raj and is swept up by the royal opulence while his companion Mohammed curses the British oppressors and longs for home.

But is Abdul so simplistic? What about his child bride back at home and the gonorrhoea that the doctor discovers? Can he really be acceptant of the status quo? It seems from his diaries that he was. But the popular Indian actor Ali Fazal seems to play Abdul with some of the ambiguity that a modern reading of the situation requires, insofar as you can never quite trust his innocent sincerity.

Judi Dench and Ali Fazal in Victoria and Abdul

Before long the pair is inseparable and – horror of horrors – Abdul is teaching the Queen Urdu, the Muslim version of the Hindi language. For it turns out that the ‘Hindi’ men, as they are called, are Muslims. Misinterpreting what Abdul tells her about his father, she believes he is a spiritual leader and teacher or munshi, and asks him to be her munshi. When he explains that servants cannot be munshi, she declares, ‘You are a servant no longer’ and shocks the court by taking him to Venice and to her private Scottish Baronial lodge, Glassalt Shiel, where she took Mr Brown. 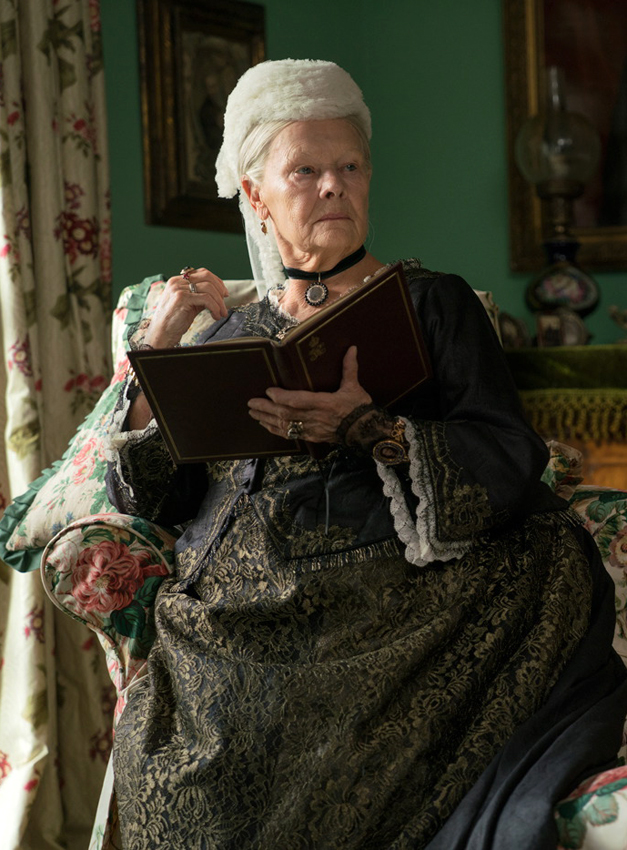 Judi Dench in Victoria and Abdul

The relationship between Victoria and John Brown was chivalric and romantic; the relationship between Victoria and the much younger foreign subject whom she decided would be her teacher is more complex. It shows the adult queen at her most rebellious; determined to regain her youthful elan. Dench milks the role for all it’s worth with her well-honed delivery of script writer Lee Halls (War Horse, Billy Elliot) one-liners and righteous speeches. But she is also at her most vulnerable.

In one of the final scenes, a dying Victoria warns Abdul that she will not be able to protect him any longer from the prejudice at court and in society. But you cannot help but think that her way of flaunting her relationship in the faces of her court; her failure to share her learning; and her flagrant favouritism did little to help Abdul win acceptance. Predictably, wastrel Bertie (Eddie Izard), later Edward VII; Private Secretary Sir Henry Ponsonby (Tim Pigott-Smith, in his last screen role), Lord Salisbury (Michael Gambon) and Jane Spencer, Baroness Churchill (Olivia Williams) get the knives out. Yes, they were racist, but if they did not really suspect she was losing her mind, outsiders might.

In dark scenes that get to the heart of the matter, the sublime Dench could remind us of Princess Dianna were it not for Victoria’s undiplomatic refusal to suffer fools. She may be Empress of India, but she has never been there, and cannot because of a Fatwa following the 1857 revolt when the army believed that pig fat was used in the cartridges of the new rifles issued. Despite the expense of Durbar Hall in Osborne House – Victoria’s attempt to bring India to her if she could not go there – she remains isolated from and ignorant of her empire and so much of life. What neither Abdul nor Victoria bring into Osborne House is any understanding of the real India that would, 50 years later, kill up to 2 million former subjects, displace some 12 million and leave scars that may never heal.