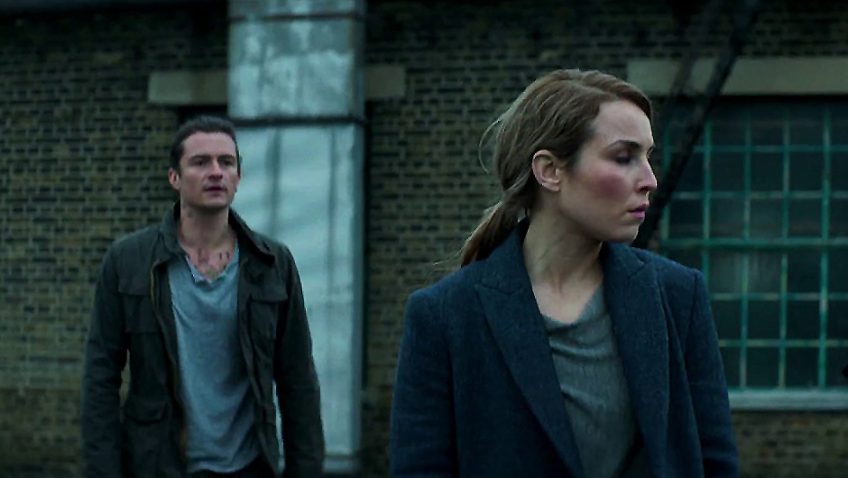 British director Michael Apted is as prolific and respected for his television (Pinter’s The Collection, Married in America) as for his documentary (the 7 Up! series) and his feature films (Amazing Grace, Gorillas in the Mist, Class Action), many of which have a social message. While his record is not unblemished, his films have garnered numerous awards, including 7 Academy Award nominations and one win for Coal Miner’s Daughter.

Now 76, Apted returns from work in television for Unlocked, a political thriller that has attracted the star-studded cast that you would expect from the director of the taut, suspenseful and atmospheric political thriller Gorky Park. But if it’s not the pay cheque, just what attracted Apted and his cast to Peter O’Brien’s debut screenplay is one mystery that may never be unlocked. The one thing to be said for Unlocked is that it’s the women who come out on top in the man’s world of international espionage. Like Coal Miner’s Daughter and Apted’s impressive thriller Blink, Unlocked features a strong central female lead, and a strong female (Toni Collette) supporting role.

It’s not surprising, given what CIA interrogator Alice Racine has to endure in the film that she is played by Swedish actress Noomi Rapace from the Girl with the Dragon Tattoo trilogy. Rapace is famous for out smarting and out living the most loathsome of sadists and murderers in her films. She has to do this and more in Unlocked where Alice is continually being ‘played’ by would-be colleagues and handlers.

One of the film’s familiar motifs is that of the conscientious CIA agent who has lost his or her self-confidence or who is disgraced and ‘demoted.’ Alice Racine is traumatised after failing to ‘unlock’ the suspect she was interviewing in time to prevent a bomb from exploding and killing 24 people in Paris, including children. Although she eventually discovers the truth of what actually happened that day, for now, Alice (who sticks out like a sore thumb) is working undercover as a social worker in Tower Hamlets. Here (in the film’s idea of a subtle psychological touch) she snaps at a ‘client’ who happens to pick up her model souvenir Eiffel Tower.

We are also introduced to two seriously American CIA directors involved in a London terrorist plot and one Australian MI5 agent, played by Toni Collette, whose hairdo has just been adopted by fashion model Cara Delevingne. The first Yank is the head of London Station (Michael Douglas) who declares with some justification that he is ‘too old to be doing this shit’ and is Alice’s trusted mentor. The other, the supremo of the Langley Division, is played by John Malkovitch. Malkovitch has had too much practice playing a cynical, comic Special Ops agent dragged out of retirement in Red 1 and 2 to be taken seriously here, although at least he tries to keep us guessing.

It’s Alice’s turn to be brought out of semi-retirement when an Iman delivers a message to an ISIS assassin who is an American citizen. It involves a chemical weapon plot (Variant K – ‘on every Jihadist’s wish list’) and the chemical is being manufactured in London.

‘You mean we don’t have another interrogator?’ Malkovitch’s character asks when a suspected messenger is apprehended and needs urgent unlocking to prevent another terrorist disaster? ‘Well,’ replies a cautious agent, London Station has Alice Racine, but she has had a rocky couple of years.’

That is a surefire signal to cinema audiences that the men who have usually been in these roles, from Clint Eastwood and Mel Gibson to Bruce Willis, are mavericks who are going to do more than redeem themselves after years of licking their wounds.

The early scene in which Alice inadvertently discovers she is being played (for the first time) while masterfully interrogating a messenger-suspect is promising. The action is tense and well-directed as Alice demonstrates her trademark fast thinking, sharp shooting and physical fitness.

Unfortunately, as Alice sinks deeper into a plot so convoluted that it makes Now You See Me 2 seem comprehensible, it is all more of the same with some unintended comic effect. One nominated effect is the entry of Orlando Bloom with a man-bun; a cockney accent that wouldn’t fool Dick Van Dyke’s chimney sweep in Mary Poppins ; and a cover identity that Inspector Clouseau wouldn’t buy.

It’s a challenge to write a convoluted plot that is also entirely predictable, but O’Brien succeeds in doing so. So is the use of a rogue agent, a character so overused now that to call it a cliché would not do it justice. O’Brien’s falls into the category of a cop out, for it is usually a politically correct excuse not to offend any external race/religion or nationality. Remember White House Down, a film so rich in anti-West propaganda value that it is probably still playing in ISIS and Al Qaeda training camps?