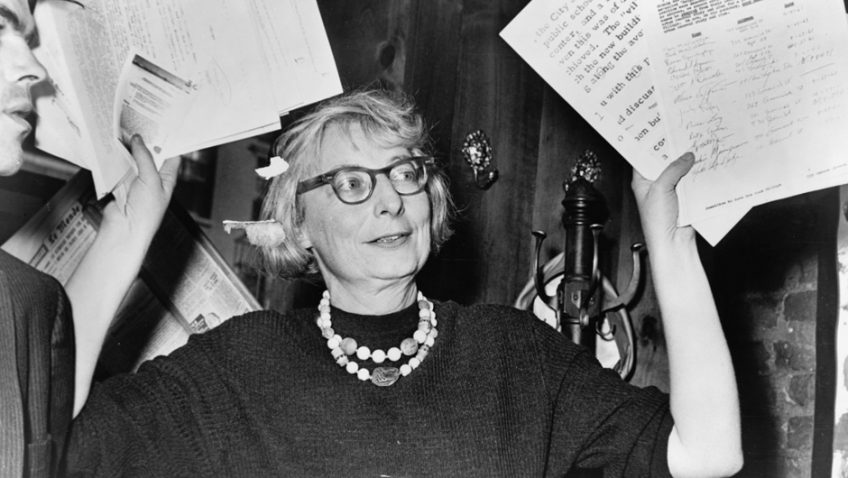 An inspirational and timely documentary that no city dweller should miss

Joyce Glasser reviews Citizen Jane: The Battle for the City (May 5, 2017)

You might think that a documentary about the battle between an American journalist-turned-grass-roots-activist and the well-connected New York urban planner supremo Robert Moses has little interest for the rest of the world. But as Londoners, and residents of all great cities grapple with the homogenisation, gentrification and verticalisation of our cites, Citizen Jane: The Battle for the City is one of the most relevant films of the century.

In one corner was the highly educated (Yale, BA, Oxford, Jurisprudence, Ph.D., Political Science, Columbia University) Robert Moses who began life as an idealist reformer responsible for erecting state parks, moving the UN to Manhattan with Oscar Niemeyer’s great building, and, ironically, trying to rid NYC politics of patronage hiring practices. None of this background is included in the film which focuses on Moses’ disastrous post-war strategy, by which time he held no fewer than 12 positions of authority simultaneously, none of which were elected. Perhaps director Matt Tyrnauer did not want to distract our focus with the detail of how Mr Moses wielded so much power, but, for the curious, it was a combination of his early success and the fact that his methods of finance excluded legislative scrutiny. It was also because until Jane Jacobs, he had no real opposition. In the other corner was Jacobs (narrated by Marisa Tomei), who went on to write one of the most influential books on city planning of the 20th century , but was not an architect or a city planner and did not even have a college degree. But Jacobs was a principled journalist with a keen eye who lived in NYC with her architect husband and young family and saw the way people used their environment. Buildings do not create cities, people do was her mantra.

The sidewalk that was destroyed by the biggest wave of urban regeneration in history ‘does not rely on constant police surveillance to keep it safe,’ according to Jacobs, ‘but on an ‘intricate, almost unconscious, network of voluntary controls and standards among the people themselves, and enforced by the people themselves.’

The high rise tower blocks that replace the rundown, but human scaled buildings, on the contrary, quickly became wastelands. In archive footage we watch as, one by one, these massive complexes are blown up, when they quickly became slums. But you cannot design what grew organically out of the complex interaction of people living in close proximity, and many vibrant sidewalk neighbourhoods were destroyed.

Cities have the capability of providing something for everyone: only when they are created by everyone,’ she wrote. After the war, influenced by modernist architects like Le Corbusier, Moses became that ‘everyone’, and convinced his cronies that the solution was the benevolent act of slum clearance. Tower blocks were erected all over NYC and the country followed in what urban theorist Robert Stern claims was a misinterpretation of Le Corbusier. But within a short time the playgrounds were neglected, the exterior spaces were the domain of drug dealers and there were no ‘eyes and ears’ of the community gathered on the front steps to prevent crime.

After housing, Moses, a believer in automobiles rather than public transport, turned to building routes for the cars that everyone wanted. We are told that the first of Moses’ commandments was, ‘Thou Shalt Drive!’ and, in his capacity as NYC Parks Commissioner, he pushed through a proposal to build a road and bus route through the centre of Washington Square in order to extend 5th Avenue, a more high rent alternative to the current Broadway, which would have been renamed.

Jacobs retaliated with a brilliantly run public protest. ‘What’s good for General Motors is not good for the Nation,’ she proclaimed. Endorsed by local housewives with prams and celebrities like Margaret Mead, Susan Sontag and former first lady Eleanor Roosevelt, it was Moses’ first major defeat. Tyrnauer makes the point that Jacobs benefitted from and contributed to the era of protests that extended to the Civil Rights Movement and the Vietnam War. It would have been interesting to learn more about this ‘brilliant strategist’s’ methods.

In response to the 1950’s policies of Robert Moses Jane wrote her seminal book, The Death and Life of Great American Cities

, published in 1961. Her next big battle with Moses was the Lower Manhattan Expressway (LOMX), which would have destroyed the peaceful neighbourhoods and the great architecture of lower Manhattan and Greenwich Village (where Jane was living). Backed by The NY Times, The Village Voice, former Mayor Ed Koch, and finally, due to public pressure, the incumbent Mayor Wagner, only one phase of the project was completed and the rest was killed off.

That said, as Tyrnauer reminds us, Jane had not prevented Moses’ Cross Bronx Expressway that ‘ripped the heart out of the Bronx’ or the destructive slum clearance projects that hit the poorest NYC inhabitants the hardest.

While the LOMX defeat was the beginning of the end of Moses, it was also Jacobs’ American swan song, who was briefly arrested for inciting a riot at the planning meeting for the Expressway in 1968. With the Vietnam War threatening her sons, the family moved to Toronto where Jane continued to fight her corner.

Released to coincide with the centenary of Jacobs’ birth, this is a timely and inspirational film which we have to hope is seen by all our MPS, mayors and city officials.