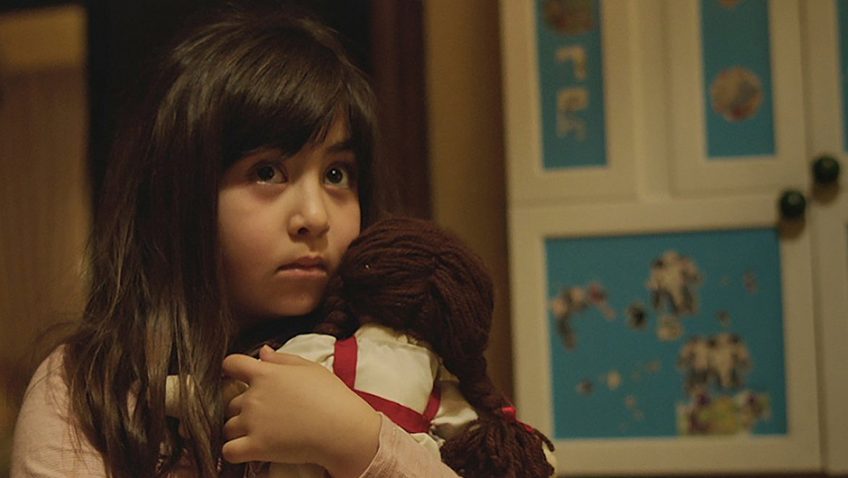 You have to comb the archives to find a Middle Eastern horror movie, but a feminist Iranian horror film from a first-time director is almost unheard of. ‘Almost’ because last year, the British-born American auteur Ana Lily Amirpour called her feature film debut, the A Girl Walks Home Alone One Night, the first Iranian Vampire Spaghetti Western. Writer/Director Babak Anvari now lives in the UK and his film was shot in Jordan, not Iran. Nonetheless, the beautifully atmospheric Under The Shadow

, shot in Farsi with English subtitles, and set in Tehran during the Iran-Iraq War, gives a very Iranian twist to the classic tropes of the Anglo-American horror genre.

The Iranian Revolution began as a popular democratic movement (as in Syria) but ended in the establishment of an ultra-conservative Islamic State. Captions tell us that the Iran-Iraq War, 1980-88, is thought to be the longest conventional war of the 20th century. It is 1988 and, covered in a black chādar, and wearing no make-up, thirty-something Shideh (Narges Rashidi, superb), is seated opposite a stern looking Admissions Director (Bijan Daneshmand), pleading her case.

They are both momentarily distracted by a bomb exploding outside the window, a brilliant touch of ironic humour and sinister foreshadowing. Prohibited from completing the medical studies which were interrupted by her youthful political activism, Shideh now wants to get her degree. Everything she says in mitigation (‘I made a mistake’ and ‘But everyone was politically active during the Revolution’) backfires on deaf ears.

After collecting her daughter Dorsa (an excellent Avin Manshadi) from a sympathetic neighbour, Shideh returns to her spacious, middle-class apartment and seeks out a book. Fighting tears, she tenderly opens a medical textbook, inscribed by her late mother: ‘To my daughter. Congratulations beginning medical school, your loving mother.’ When her husband, Iraj (Bobby Naderi), returns from the hospital where he works as a doctor, she tells him the outcome, glaring with resentment at this comment: ‘You did your best…Maybe it’s for the best.’ Iraj later confronts his wife with the prospect that medical school was not her dream, but her mother’s.

When Iraj learns that the Ministry of Health will send him to the front, Shideh relieves her stress in front of a Jane Fonda’s Workout exercise video. Iraj pressures his wife to take Dorsa to his parents and Shideh’s challenges Iraj about her ability to take care of her daughter alone in Tehran. While Shideh is not a typical Muslim wife (for one thing, she drives and is therefore more independent) this is an important theme in the film, for in the Quran the mother/child bond is sacrosanct. Narges Rashidi in Under the Shadow

In the ensuing days, however, the bond between mother and daughter becomes strained. Dorsa, who wants to sleep in her mother’s bed, is frightened of a lady she sees when her mother is not present. She reports that the landlords’ children, and their visiting cousin, Mehdi, warned Dorsa about the Djinn. ‘Mehdi gave me a ball of magical cat fur to protect me, but I lost it,’ Dorsa moans.

When Shideh tactfully complains to Mrs Ebrahimi (Aram Ghasemy) that Mehdi is frightening her daughter, Mrs Ebrahimi, corrects Shideh, telling her that the Djinn are real (‘they are in the Quran’). She also informs Shideh that Mehdi has not spoken a word since his parents were killed.

We learn that the Djinn are supernatural creatures in early Arabian and later Islamic mythology and theology and that once they steal something of value from a human, they can posses that human.

Just as an unexploded missile falls through the roof of the building in one of several surreal moments and the neighbours start to move out, Dorsa complains that her favourite doll is missing. She refuses to leave for her grandparents’ home without it. While searching in vain for the doll, Shideh notices that her mother’s medical book is also missing. As Shideh struggles to persuade her feverish daughter that the lady who visits her is not real, she herself is haunted a cracked ceiling (or is it from an airstrike) and a man in her bed who she mistakes at first for Iraj.

Anvari admits to being influenced by ’70s and ’60s horror films, like “Rosemary’s Baby,” “Repulsion,” “The Tenant,” the original “The Haunting” and the fantastic British horror film “The Innocents” and the influence is obvious. While on one level this is a psychological horror movie like last year’s The Babadook, on another level, the haunting of this mother and child delves into Iranian culture.

In one scene, Shideh finds the unspooled videotape from her missing Jane Fonda’s Workout cassette in the bin, as though she were being punished for dancing in front of an illegal VCR. When she flees from the flat with Dorsa late one night, attacked by enemy shells or supernatural beings, they are stopped by two soldiers. Instead of helping the distraught woman, they arrest her for being outside without her veil.

The brilliant concept that distinguishes Under The Shadow

is that Shideh loses the ability to distinguish between psychological and physical injury, as well as between the hell of war, political oppression and possessive supernatural forces. The problem is that, thanks to the charismatic Rashidi’s dazzling performance, we become so absorbed by Shideh’s personal struggles and relationships that the more familiar horror elements become distracting and intrusive.