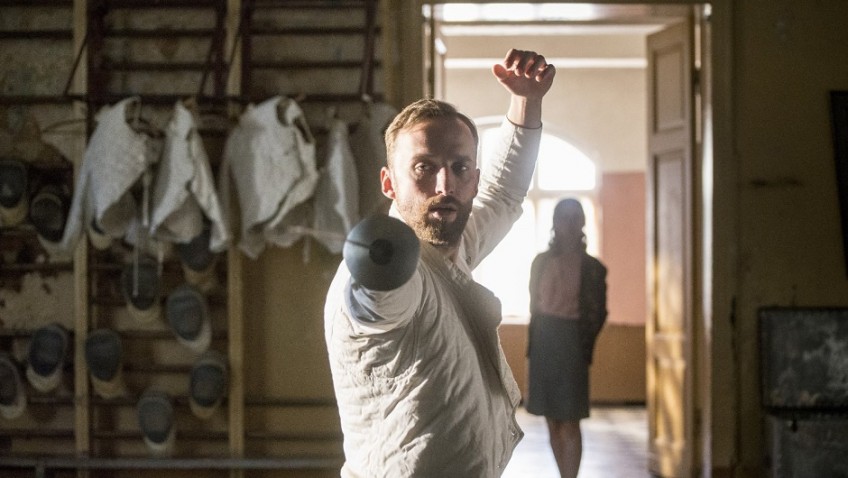 Although Finnish director Klaus Härö is hardly a household name in the UK, three of his four previous features, and now, The Fencer, have been Finland’s entries to the Academy Awards and, in 2003, Härö was awarded the Ingmar Bergman Award for filmmaking, by the late Bergman himself. A conventional biopic and sports competition drama, The Fencer is not particularly innovative, but it tells an engaging story that offers a fascinating glimpse into a little-known corner of history. And if Endel Nelis is not a household name here either, the Estonian fencing club that he began in the reign of Stalin is still striving today. Liisa Koppel in The Fencer

In fact, our limited knowledge of Balkan history is taken for granted and captions fill us in on the background to the story. In World War II, Estonia was occupied by Nazi Germany that drafted Estonian men into the German army. It was then ‘liberated’ by the Soviet Union and, after the war, incorporated into it under Stalin’s tyrannical regime. Though they were hardly willing volunteers, Estonian soldiers who had been drafted into the Germany army were considered criminals.

One such criminal-at-large is Endel Nelis, who has a hard time convincing officials that a single man and University graduate living in Leningrad would voluntarily move to the back-water Estonian town of Haapsalu. But when Endel’s friend and fellow fencer Aleksei (Kirill Karo) convinces him to leave Leningrad and lie-low, Endel is forced to accept a job as a gym teacher there. His chief adversary is the school’s spiteful, petty head-master (Hendrik Toompere), an indoctrinated clog in the Soviet wheel who works overtime to expose Endel’s past.

Endel wants to avoid drawing any attention to his true identity (his surname is Keller) and only reluctantly begins a fencing club. Although there is no budget for sports equipment (skis having been appropriated by the Army), the headmaster pressures Endel to do his job, taunting him, ‘you’re the one with the University degree, think of something.’ One day Endel finds an old foil in the cupboard and, encouraged by a spunky little blond student named Marta (Lissa Koppel), invites students to join the new fencing club. Everyone shows up.

Endel enlists the help of the students in collecting reeds, which he boils and prepares to serve as foils. A proper foil is donated an eager student’s (Joonas Koff) empathetic, university-educated grandfather (Lembit Ulfsak) whose son was a victim of Stalin.

Throughout the film, scriptwriter Anna Heinämaa deftly recreates the tension that was a part of the Estonian’s peoples’ lives during the period. When Endel learns that two men are at the door to see him, he fears for the worst, but turns out to be pleasantly surprised with the crates that they are delivering. Fear is also evident in a mock meeting that the headmaster sets up with the parents, certain they will go along with him in objecting to an elite sport that is ‘a relic of feudal times.’

After a meek mother whispers that her child is enjoying the club, the head-master snaps, ‘That’s not the point. Our sports have to have a political meaning,’ silencing the room. Jaan’s grandfather (who will later pay for his outspokenness) replies that historically, ‘there is nothing feudal about fencing.’ After adding, ‘Karl Marx was a fencer’, he suggests a vote – not a common occurrence in the Soviet Union. Mart Avandi in The Fencer

Fear haunts Endel when he has to choose between his personal safety and disappointing his students, many of whom have lost their fathers and have suffered hardship. Few have travelled or taken part in a competition before. They have found fulfilment through fencing and want to prove themselves at an inter-school fencing match in Leningrad. In a touching character arch, Endel, who struggled to relate to the children at the beginning, now recognises he is a father figure and feels a sense of responsibility to them.

If the final third of the film become a conventional sports film, the tension from the competition is again interwoven with political tension as police fill the corridors and stairwells. A love interest with a fellow teacher, (Ursula Ratasepp) also follows a conventional path, but it feeds nicely into Endel’s increasing empathy with the people of Haapsalu which makes his altruistic decision easier to understand.

Shot in Estonia, the atmospheric camerawork from Tuomo Hutri and set design from Jaagup Roomet (which at times resembles a muted Chagall painting) add to the authentic period feel that pervades this uplifting film.