Home / LIFESTYLE / REVIEWS > / FILM REVIEWS / Zombies on a train shouldn’t be this much fun. 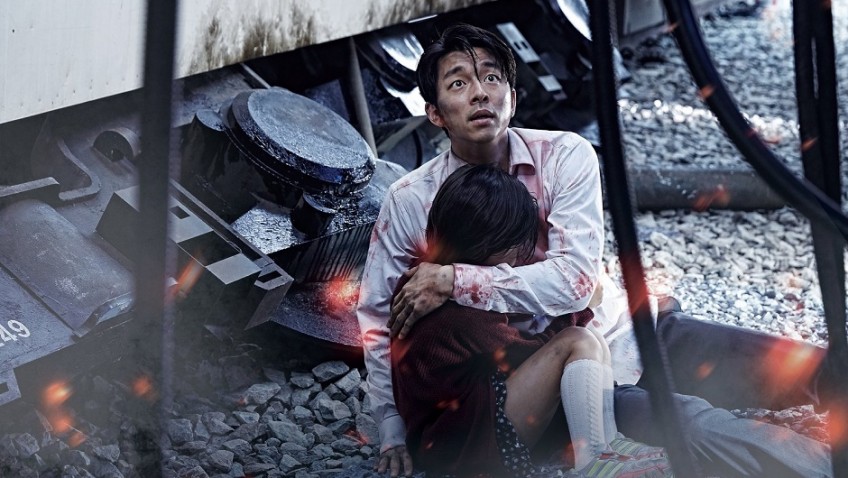 Zombies on a train shouldn’t be this much fun.

Like Halloween revellers, zombie movies come in all guises (remember Abraham Lincoln vs Zombies, or early this year, Pride and Prejudice and Zombies?). Crossing the horror and dystopian Sci-Fi genres, the zombie movie is so flexible and so difficult to kill off that it looks like we are stuck with the revolting creatures for eternity.

Then, just when you feel filmmakers are scraping the bottom of the barrel comes along a fresh, fun and frantic contribution to the genre from South Korean filmmaker Sang-ho Yeon. Sang-ho gives the tropes of the genre a new life with a compelling array of characters who restore our faith in mankind, just when it is most needed. Unfortunately, Sang-ho mixes his dazzling effects and clever action sequences with an overly prominent social message designed to wake up Seoul’s robotic businessmen from their money-worshipping stupor.

It’s only right to mention Train to Busan

’s grittier animated prequel, which, like Sang-ho’s previous films, combine violence with social commentaries. That film includes a ‘stinking homeless man’ ignored by police, social workers and liberal lefties and a father about to be reunited with his estranged daughter when a zombie epidemic breaks out. Judging from this and Train to Busan

, Sang-ho is seriously worried about his country.

The prologue takes place on a country road where an irate farmer, remembering a foot and mouth outbreak, complains to officials at a road block. They tell him that this time it’s a suspected leak at a biotech firm. As he searches for his phone, the driver runs over a deer that resurrects himself with blood red eyes as the farmer drives off.

Cut to Seok-woo (Yoo Gong), a divorced hedge fund manager, with, it turns out, an investment in the biotech firm. He lives with his unhappy young daughter Soo-an (Su-an Kim) and his fretting mother in Seoul, but rarely spends time with them. Too late he learns that he missed Soo-an’s singing performance at school. When he sees the video he notes that she never finishes the song. He tells Soo-an to never give up on anything. This clearly isn’t a throw-away line.

Wracked with guilt for buying Soo-an a birthday gift that she already has, Seok-woo decides to make up for it by granting her wish to visit her mother in Busan. He will take time off work to accompany her. Just as the train is ready to depart we alone note a strange, rabid-looking young woman with a leg wound jumping aboard at the last minute. When the stewardess asks if the young woman requires medical attention the agonising creature attacks her savagely. Within minutes infected passengers turning into zombies run through the train. Within no time it seems, the zombies are on one end and the normals are on the other separated by a glass window covered in newspaper. 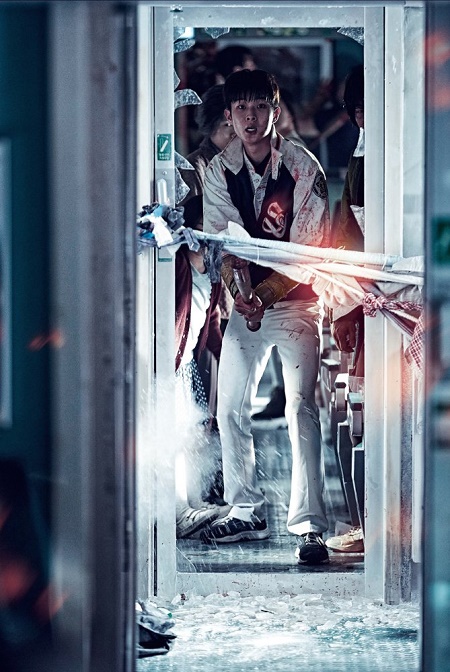 Woo-sik Choi in Train to Busan

A news broadcast informs the population that, ‘we are currently experiencing riots in all major cities. Please refrain from reacting to baseless rumours and stay in the safety of your own home. As we later learn from a tragic conversation between Seok-woo and his mother, the home is no longer a safe option.

Gradually, we get to know the passengers who gravitate around Soek-woo and Soo-an. A homeless man (Gwi-hwa Choi), who is shunned as in Seoul Station, turns out to be a hero; two older sisters In-gil (Soo-jung Ye) and Jong-gil (Myung-shin Park) turn out to be more devoted than anyone suspected; while a teasing young cheer-leader and a high-school base ball player with a crush on her are not the silly teenagers we imagine. Sang-hwa (Dong-seok Ma) a stocky, working class man and his delicate, pregnant wife Seong-kyeong (Yu-mi Jung) become close to the wealthy businessman and his daughter, although at first, Sang-hwa is very much the businessman’s foil. For Seok-woo, it’s a bit like having Ken Loach beside you when you tell your daughter that she doesn’t have to give up her seat to an elderly lady; In times like these, it’s everyone for himself.

These unlikely circumstances are, however, the making of Seok-woo as he realises that team work, with people of a variety of classes and ages, is the only way to survive. But Sang-hwa steals the show and his untimely absence is really felt in the final quarter of the film.

What makes Train to Busan

palatable for those who don’t enjoy zombie movies is the humour; the ingenious ways in which the core team trick and evade the zombies; the slickly directed action sequences; and the interaction between the characters, whose actions and reactions are all believable. We get the selfish and the cowardly, the courageous, and also the ‘sheep’ in society represented in a tense scene in which a group of ‘normal’ passengers refuse to let our core group of heroes into their carriage for fear of contamination.

The final ten minutes of the film, with a silly and disappointing action climax and a sentimental denouement do not spoil the pleasure of a film that is to the Zombie genre what the 2008 South Korean film, The Good, the Bad, the Weird was to the Spaghetti Western.