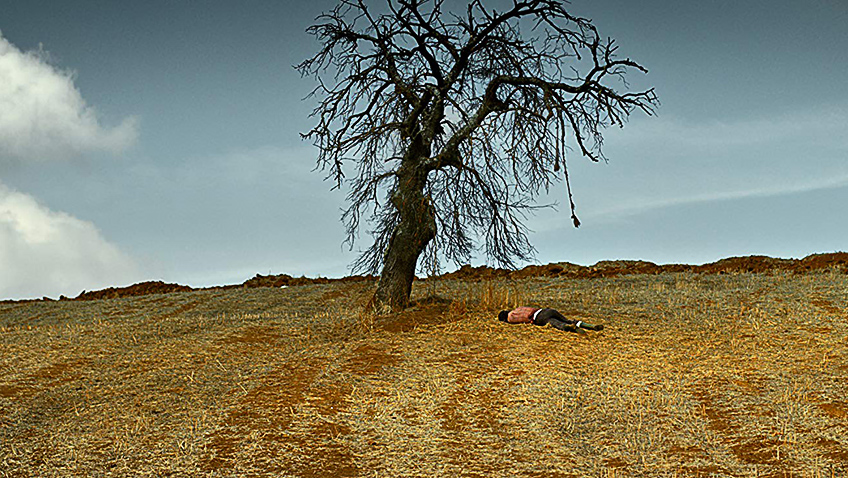 Turkish producer/director/writer/editor (with his wife Ebru), Nuri Bilge Ceylan won the Palme D’Or at the Cannes Film Festival for his last film, Winter Sleep, inspired by Anton Chekhov’s story, The Wife and dedicated to him. But Ceylan (Once Upon a Time in Anatolia, Distant) has a unique, mesmerizing style of his own that makes the length of his demanding, but rewarding new film, The Wild Pear Tree

Inspired by the life and personality of a local teacher Ceylan met, Akin Aksu, and co-written with Aksu and Ebru Ceylan, this is a coming-of-age and father-son story in which ideas, words and contrasting values overshadow the plot. Yet the plot, a young man’s quest to publish a manuscript and find his place in life, is not your standard three-act drama either.

Sinan (unprofessional actor Dogu Demirkol) is the son of Idris (Murat Cemcir), an idealistic and philosophical primary school teacher who long ago charmed his long-suffering wife (Bennu Yildirimlar) with his gift for words. Now in his sixties, Idris numbs himself to the materialism and harsh reality of life in the town of Çan by gambling on everything from horses to the existence of water in a well he has been digging for years. Idris ends his words now with a sarcastic laugh that annoys the townspeople and further alienates the misfit. Sinan returns home from the city of Çanakkale where he has just graduated from university to sit his pedagogy exam and raise funds to publish his manuscript.

In this arduous journey, Sinan, an imposing, argumentative, provocative 20-something with a sense of entitlement that diminishes the good will extended to him, meets a variety of people who turn the film into a tapestry of modern day Turkey. They tend to be borrowers (even the Imam) or lenders, but are all shoring against their ruin. Sinan’s encounters turn into confrontations and all but one ends badly.

There is a tension between father and son that is modelled in part on the relationship between Akin Aksu (who plays the role of the conservative Imam Veysel) and his father, although Ceylan draws on his own father, too. The judgmental Sinan is both ashamed of what Idris has become and afraid that he will take after him. Both, he will come to realise, follow a different drummer. Idris’ debt has forced him to sell their home and Sinan’s mother and sister, who find solace in front of the mindless soap operas on television, have to borrow bus fare and put up with electrical cuts. 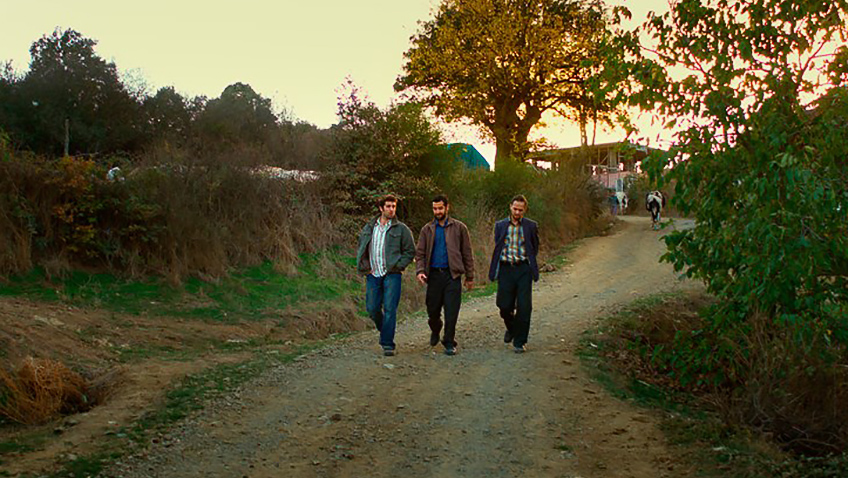 Even if Sinan passes his exam, teaching jobs are so scarce that a friend from university has joined the well-paid riot police and jokes about threatening poor leftist students. Sinan will have to do his military service, but will he return to a job offer?

Topical socio-economic, political and cultural issues in Turkish society are more obvious here than in his other films. We even get a statistic: there are 3,000 would- be teachers for every position opening. When Sinan goes to see Ilhami (Kubilay Tunçer), an entrepreneur who Mayor Adnan (Kadir Çermik) claims is a ‘big reader’ and might fund the book, Ilhami brags that he left school early, but is a self-made man who now employs university graduates. He admits to Sinan that he supported the odd educational project because the Council was a good customer.

A chance encounter with Hatice (Hazar Ergüçlü), is one of the most heart-breaking, understated portraits of unrequited love you are likely to see in a long time. It introduces us to a young woman struggling with disillusionment and anxiety about her future in the same way as Sinan. Sinan’s former schoolmate has grown into such a beautiful young woman that Sinan does not immediately recognise her. 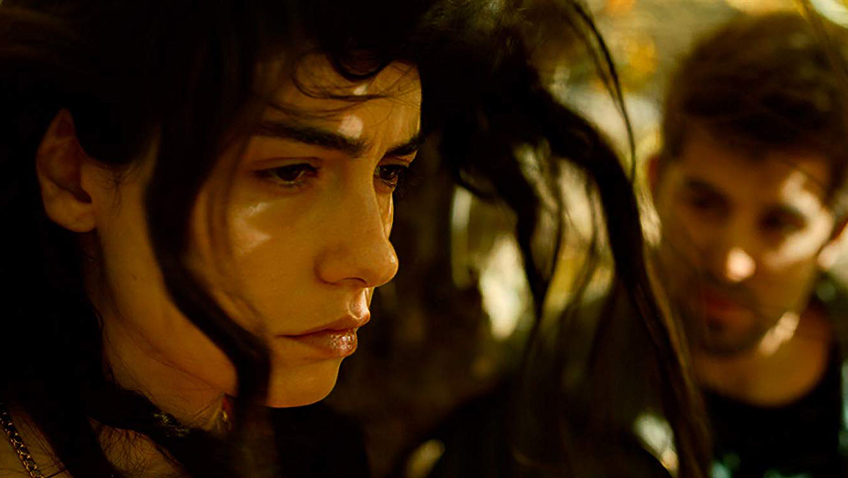 Hazar Ergüçlü and Dogu Demirkol in The Wild Pear Tree

Hatice admits that her family do not own the fields, but are just ‘helping out’ – collecting walnuts. Sinan is surprised – and tries to hide his disappointment – to learn that Hatice dropped out of school. With characteristic insensitivity, Sinan insists he will ‘not rot in this place filled with small-minded bigoted people.’ Hatice tries to convince him, and herself, that, on the contrary, she wants to settle down and is engaged to an established jeweller. As the wind rustles through the trees and the great Gökhan Tiryaki’s camera momentarily leaves the lovers to soar above them in the dappled light, Hatice frees her hair from the headscarf she now wears, but Sinan cannot help her decide what she should do. When he suggests that she listen to her heart she replies, ‘when was the last time my heart said anything?’

Much later in the film, when Idris asks Sinan what his plans are after completing his military service, he replies, ‘I don’t know. Either teach and waste my youth like you or get any old job.’ He then asks his father what he thinks he should do, a faint echo of Hatice’s appeal. ‘Everyone has different expectations’, Idris replies. ‘If you love what you do you can survive anywhere. People should…let good and bad memories blend and dim and melt away. There are those that should stay, too.’

and make it as impossible to summarise as is Chekhov. Arguably the most memorable is Sinan’s increasingly antagonist conversation with the popular local writer, Süleyman (Serkan Keskin). The patient writer has enough of this upstarts’ indirect criticism and his irritating dissection of a rural writer’s conference: he just wants to get home to soak his aching feet! 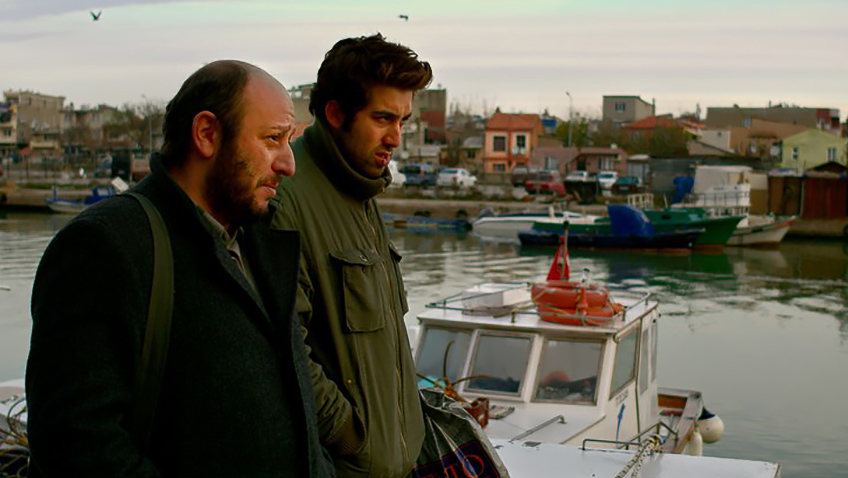 Serkan Keskin and Dogu Demirkol in The Wild Pear Tree

Sinan’s book is – a bit like this film – a personalised memoir – ‘free of faith, ideology, and allegiances’ about the land of his youth, where gnarled, stunted wild pear trees grow in abundance. At the end of the film, in one of the greatest father and son scenes in the annals of cinema, the metaphor expands. As they lean against Idris’ shepherd’s hut in the falling snow, Sinan, who returned from military service humbled and guilty about his father’s beloved dog, sees his father – who alone has read his book – in a new light. ‘The fruit of the wild pear tree is misshapen as you say,’ Idris tells his son. ‘But I have it for breakfast some days and it’s delicious.’

Is Sinan a modern day Ulysses and his quest to publish his book, his Odyssey? Çanakkale Province, the site of Gallipoli, Troy, Hero and Leander’s love and death and Lord Bryon’s swim has inspired a wealth of literature and poetry that enterprising locals are capitalising on. There is money in Mayor Adnan’s budget for historic and tourist books, but not for literary memoirs about wild pear trees. The wooden horse from Wolfgang Petersen’s period epic film Troy (budget, $185 million) was left behind in Çanakkale and in a dream, Sinan seeks shelter from a mob inside it.