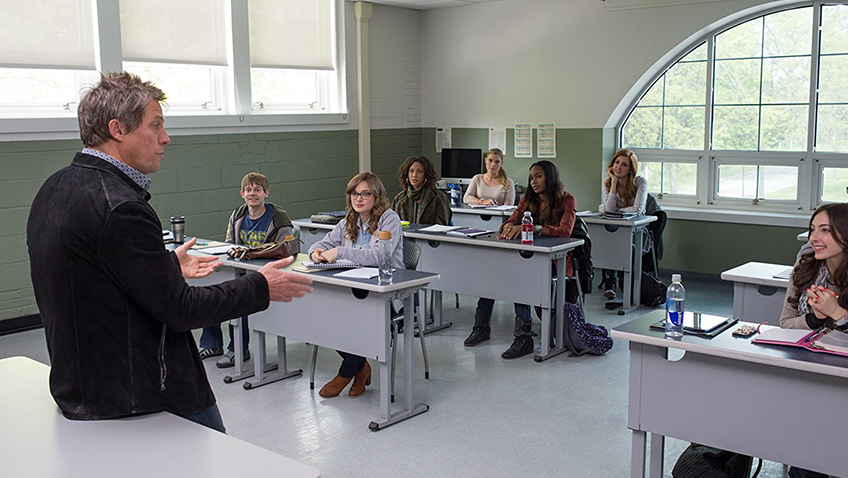 Hugh Grant stars in the school-based rom-com The Rewrite

‘School films’, or films about teachers and students, are not only a bonafide genre, but are so numerous and varied that subgenres have emerged. There’s ‘The Bad Teacher’ (Bad Teacher, The Piano Teacher, Easy A); ‘The Noble, Inspirational Teachers’ (Être et Avoir, To Sir, with Love, Mr. Holland’s Opus, The Class, Freedom Writers, Precious); and ‘Flawed Human Being Teacher’ who runs into trouble with the establishment but gets through to students in unexpected ways.

Examples of this subgenre include School of Rock, Dead Poets Society, Half Nelson and Writer/Director Marc Lawrence’s new film, The Rewrite

. Assisted by strong comic performances from J.K. Simmons, Allison Janney and Chris Elliot. Hugh Grant can still deliver the charm and one-liners, but the story fails as a romcom and has nothing new to say about creativity, age, and employment.

Divorced and estranged from his son, fifty-something Hollywood script writer Keith Michaels (Grant), should be writing his Third Act, but is still looking back. He is trying to recapture his youthful success with an Oscar-winning script called Paradise Misplaced, but the studio heads are younger, and audiences have changed. His agent has exhausted all avenues and suggests a teaching position in Binghamton University in New York. Money worries force Keith to swallow his pride and accept the teaching job.

Keith is not natural teacher material. For one thing, he does not believe you can teach creative writing and has no lesson plans. For another, Keith bases his selection of students, not on the quality of the script pages they submitted (which he can’t be bothered to read), but on looks. The prettiest girls are in, while the token boys look like nerds.

The students and faculty are delighted to have a celebrity on campus, and a sexually aggressive, star-struck student named Karen (Bella Heathcote) wastes no time in seducing her teacher. At a faculty cocktail party, Keith gets drunk and offends Jane Austen scholar Mary Weldon (Janney) with his Austen jokes and boorish behaviour. Weldon’s anger puts the welcoming Dean of the school, Dr Lerner (J.K. Simmons) in an awkward position and he mediates between the two. 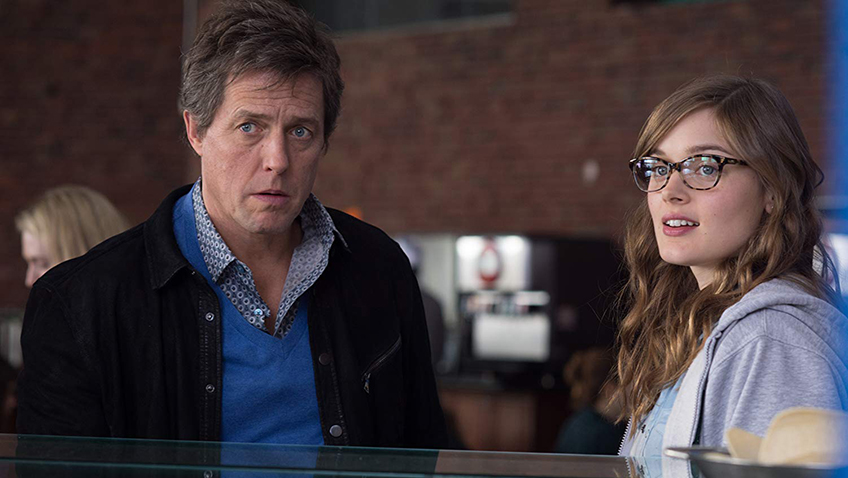 Hugh Grant and Bella Heathcote in The Rewrite

Weldon, who heads the disciplinary panel, is outraged that Keith has dismissed his class for the rest of the semester and confronts Keith about his unacceptable methods. Meanwhile, introverted next-door-neighbour Jim (Chris Elliot), a professor who enjoys Keith’s company, keeps Keith’s affair with Karen under wraps as faculty are not supposed to be sleeping with their students.

What finally changes Keith is love in the form of mature student Holly Carpenter (Marisa Tomei). Holly is too busy to be star-struck. A psych major with a literature requirement, Holly, a single mother, is working her way through school in the University shop and has no interest in flirting. Her function is to provide the film’s obligatory love interest and to represent the other side to the debate about whether creativity can be taught. She believes that if a psychology student like herself works hard enough with a good teacher, she can learn how to write a good script. 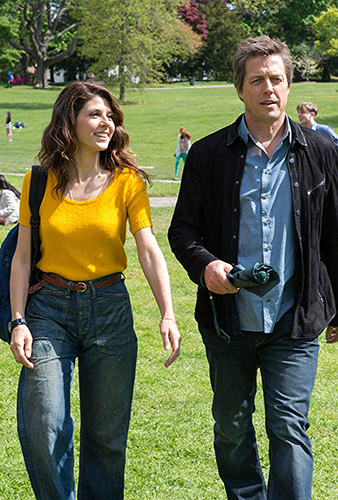 Hugh Grant and Marisa Tomei in The Rewrite

Being a psych major, she sees through Keith and, through questions in class, prompts and subtle suggestions, teaches him how to teach. Once he sees the results, Keith finds himself enjoying the experience.  He not only recognises the talent of a young male student, but arranges for his agent to read the script.  Naturally, the studios love the nerdy student’s script about a kick-ass female protagonist and we are supposed to smile as Keith recognises himself many years ago.

While never boring and always entertaining, Lawrence’s (Two Week’s Notice; The Out-of-Towners; Miss Congeniality) film is neither ground-breaking nor particularly revealing. As a comedy about academia, Josh Radnor’s Liberal Arts (2012) is far more genuine. As a film about a has-been celebrity, Grant has already played a washed-up pop star who helps a young talent in another Marc Lawrence film: Music and Lyrics.

As a romantic comedy The Rewrite

suffers from the lack of chemistry between Tomei and Grant, and a predictable, clichéd trajectory.  If this is Academy Award Winning (My Cousin Vinny) and nominated (The Wrestler, In the Bedroom) Tomei’s least impressive role, it is because her character feels like a plot device, or one of those guiding angels in Christmas movies, rather than a real woman.

The most disappointing aspect of The Rewrite

is what it says about ageing and creativity. Keith’s third act upholds the status quo. He renounces his career, gives up on his dreams, passes the baton to younger writers, and turns to helping others to go out and get what he once had.