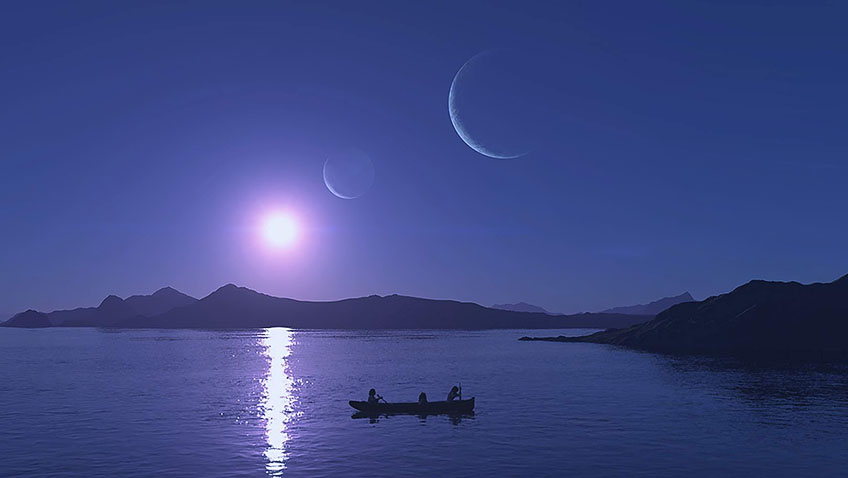 Bring up the bodies: another poetic and powerful history lesson

, a contemplative documentary with literal and metaphorical narratives that are equally enthralling. While Guzmán’s films depend for much of their force on his visuals, unusually for a documentary, The Pearl Button

won the Best Screenplay Award at the Berlin International Film Festival. From the first sentence, you can understand why.

In his previous documentary, Nostalgia for the Light, also shot by the brilliant cinematographer Katell Djian, Guzmán drew perceptive parallels between archeology and astronomy, and between Chile’s natural environment and politics. The film merged the observations of astronomers researching humanity’s past in the famous clear skies of the Atacama Desert with the struggle of certain Chilean women who still search, after decades, for the remnants of their relatives. Large numbers of ‘disappeared’ were executed in the desert during Augusto Pinochet’s sixteen year military dictatorship.

In The Pearl Button

Guzmán turns from the dry heat of the Atacama to the wet, frigid Chilean coastline and to the few remaining indigenous inhabitants whose ancestors lived from and on the sea. Just as the Atacama is a witness that holds clues to Chile’s horrific past, so, as the climax of the film reveals, is the sea.

With Guzmán, known for his trilogy The Battle of Chile and Salvador Allende, all roads lead to Pinochet. What distinguishes The Pearl Button

is that he takes a more indirect route, tracing the history of the Chilean people’s relationship with its 2,670 mile coast line, much of which is uninhabited.

Starting with astonishing images suggesting how thousands of islands in Southern Chile that became ‘an archipelago of rain’ (and the largest archipelago in the world); Guzmán then introduces the clans of indigenous natives who lived on the water. ‘They did not have cities…but they knew how to draw,’ he tells us as we see pictures of otherwise naked people covered only with painted designs. ‘They believed they would become stars when they died,’ we learn. Scientists believe that it was a comet that brought us the first drop of water. The natives who inhabited Southern Chile 10,000 years ago believed that objects were alive. Water, Guzmán suggests, lives in everything and is what unites man on earth with the stars.

The first institutionalised slaughter of Chile’s harmless clans came in the 16th century when colonialists and missionaries dressed them in western clothes and watched them die of imported germs. Others died from alcoholism or at the hands of ‘Indian Hunters’, a sport in which the natives were hunted down like animals. 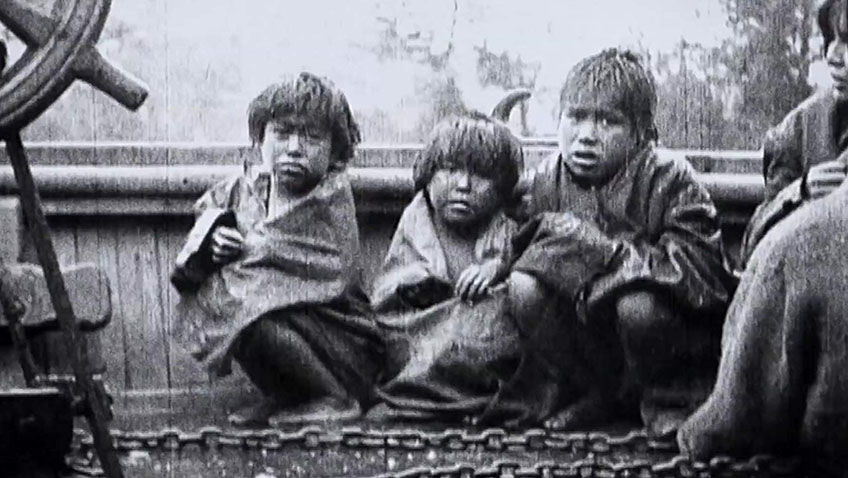 The first mention of a pearl button comes in the 19th century. In 1830, a 14-year-old native from the Yaghan clan of Fuegian indigenous native was taken to England, along with four other children, by Captain Fitzroy of the HMS Beagle, presumably to be taught English in order to serve as an interpreter. He was dubbed Jemmy Button because he was purchased (or possibly abducted) for a mother-of-pearl button. A year later, at his own expense, Fitzroy (with Charles Darwin on board) returned Jemmy to Tierra del Fuego. Within months he had shed weight, let his hair grow long, shed his English clothes for a loin cloth and resumed speaking in his native language. He did retain the English he learned so rapidly and communicated with travellers, traders and missionaries until his death.

Guzmán tells us that there were five different clans, with their own language (a very few elderly people interviewed still remember their language), who travelled long distances in canoes, with a fire burning in one canoe for warmth and food. The navy will not let the descendents travel and fish in their canoes on ‘health and safety grounds’ that seem a strange way of caring about people who depend upon such customs and practice to keep their heritage alive. In the 18th century there were about 8,000 water people surviving in polar temperatures. Today, there are only around 20 direct survivors and Guzmán interviews three of them. 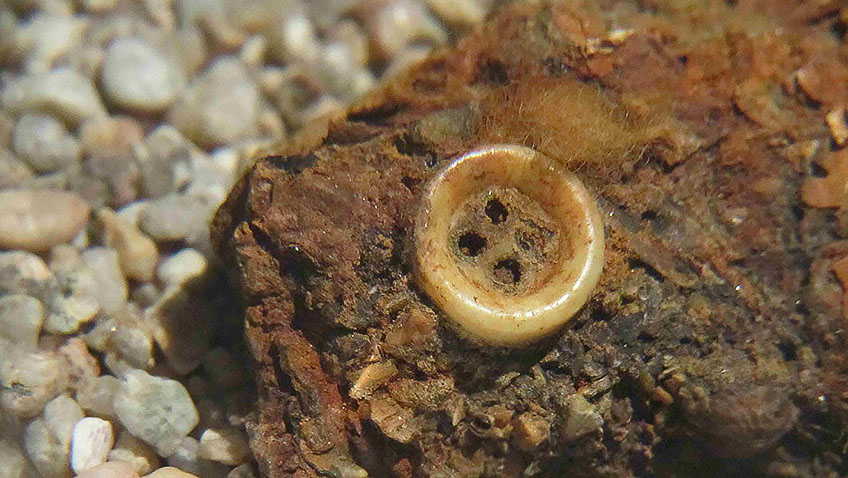 To specify the second time that we hear about a pearl button would be a spoiler as it completes an increasingly powerful tale. For, as has been stated, with Guzmán, all roads lead to Augusto Pinochet, whose destructive legacy has still not been accepted by his country. Guzmán’s films are seen by only around 5,000 followers in Chile. With one exception – Nostalgia for the Light. Which was broadcast at 1AM with the reels reversed – no television network will broadcast them. Nor are they shown in schools, where they should be a part of the curriculum.

Just as women searched for their husbands and sons in the Atacama in Nostalgia for the Light, so Judge Juan Guzmán ordered an investigation in 2004 that led to another huge cemetery, this time, in the deep blue sea. One way the Pinochet government deprived grieving families of their loved ones, even after death, was to tie their poisoned bodies to a piece of railway track, load them into helicopters, and dump them into the sea. Guzmán recreates the act for the film, a repulsive act of mass murder against innocent Chilean that is believed to have claimed around 1,400 victims.