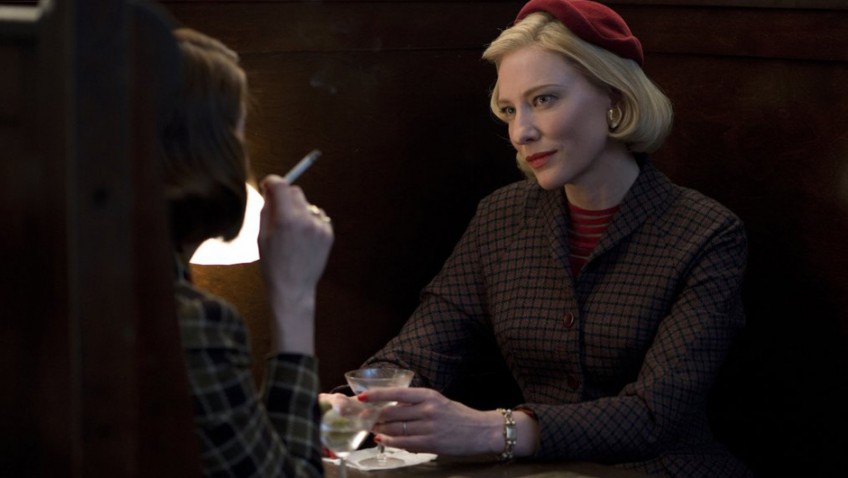 CAROL (StudioCanal). Patricia Highsmith wrote only one story in which there was no crime – unless lesbianism is a crime; and in the 1950’s many people would have thought it ought to be. A shop girl (Rooney Mara), an awe-struck ingenue who wants to be a journalist photographer, has a crush on a very glamorous older divorcing woman (Cate Blanchett) whose husband wants sole custody of their child. Blanchette, elegant, predatory, wealthy, fur-coated and coiffed, looks as if she has stepped out of the 1950’s. There are no histrionics, no melodrama; but it’s a big performance filling the screen.

STEVE JOBS (Universal) the Apple founder, a passionate perfectionist, was a great salesman and negotiator. He is observed at three major product launches in 1984, 1988 and 1998. He puts machines above people and there are a whole series of spats with his staff, his wife and a child which he denies fathering.  Audience who enjoyed The Social Networkshould enjoy this film. It’s directed with panache by Danny Boyle and scripted by Aaron Sorkin. There is a bravura performance by Michael Fassbender as the arrogant bully. “Musicians play instruments,” he says.  “I play the orchestra.” (Many thought Fassbender might win an Oscar.) Kate Winslet is his marketing chief. Seth Rogen is the guy without whom he would not be the success he is.

GEMMA BOVERY (Soda). Life imitates Art. Which would you prefer to see: an adaptation of Posy Simmons’ modern graphic novel or the genuine Madame Bovary, the 1856 novel by Gustave Flaubert? Gemma Arterton as Gemma attracts four men: her husband, her ex, an undergraduate and a besotted voyeur, an elderly baker (Fabrice Luchini), who is terribly worried that she will end up the way the I9th century heroine did. Luchini’s comic prurience is the only reason for seeing this film which is directed by Anne Fontaine.  Incidentally, kneading bread is nothing like as erotic as manipulating a pottery wheel and pretty tame when you remember what Patrick Swayze and Demi Moore did with a pottery wheel in Ghost.

SHOOTING STARS (BFI) is the British silent film which made director Anthony Asquith’s name in 1928. It’s a welcome re-discovery. The title is a pun. Film star (Annette Benson) decides to shoot her husband (Brian Aherne) on set whilst they are shooting a silent Western because he has found out she is having an affair with a popular silent comedian (Donald Calthrop). The film begins with gentle behind-the scenes satire on the movie industry and then suddenly turns serious. (Asquith would go on to direct The Way to the Stars, The Winslow Boy and The Importance of Being Earnest.  Aherne, a popular British stage actor, would take his matinee good looks to America and Hollywood.)

EUREKA (Eureka). This pretentious hothouse melodrama, directed by Nicolas Roeg, and released in 1982, quickly disappeared.  40 years on it doesn’t seem that good. The script is bad and the trial is just silly.  A prospector (Gene Hackman) goes in search of a crock of gold and finds river of gold, which can only be described as an orgasmic experience. He becomes the richest man in the world. Is he happy? Of course he isn’t.  The gold is a curse. “I had it all,” he declares. “Now I just have everything.” Rudger Hauer is his son-in-law who is falsely accused of murder and not very good in the role. The story is based on the murder of Sir Harry Oakes in the Bahamas in 1943. He was blow torched to death.