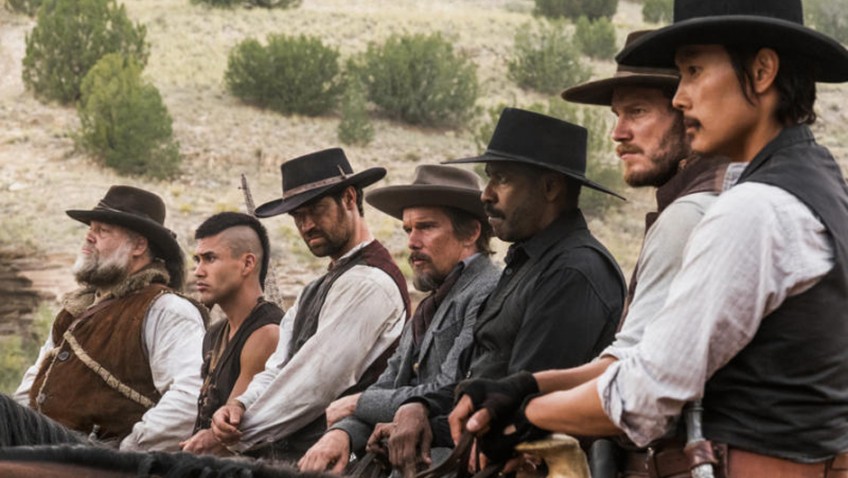 An entertaining and skilful remake of the 1956 classic In the beginning there was The Seven Samurai, Akira Kurosawa’s 1954 masterpiece.  A simple plot with so much potential for character development, action, romantic chivalry and masculine camaraderie that it took 3.5 riveting hours to tell and nobody minded.   Six years later came The Magnificent Seven and John Sturges’ acknowledged remake of Kurosawa’s film became one of the greatest Westerns of all time..  Now, 56 years later, the 50-year-old Afro-American director Antoine Fuqua whose film, Training Day, gave Denziel Washington an Academy Award, delivers a The Magnificent Seven, for the 21st century.

While the basic plot is the same, a motley group of seven loners with guns (and a few knives and arrows) unite to defend a helpless village under attack, Donald Trump, if not political-correctness, have swept away the idea of Mexican villagers being protected by white gunslingers.   This version is set in 1879, in the US farming town of Rose Creek where the hapless residents are under unbearable pressure by mining and property magnate and psychopath Bartholmew Bogue (Peter Sarsgaard) to sell their land.  When the film opens, Bogue’s army of mercenaries kill several innocent townsfolk, including young Emma Cullen’s (Haley Bennett) husband (Matt Bomer) when he dares to stand up to Bogue.

Enter Chris Chisolm, a sworn warrant officer from Wichita, Kansas, dressed in black (Fuqua’s muse, Denzel Washington).  To establish his credentials as he goes after a wanted criminal, Chisolm makes it clear he is a law enforcement officer as opposed to a bounty hunter.  A distraught but resolute Emma Cullen offers Chisolm all the money she has been saving to stop Bogue’s relentless onslaught.    Reluctant to accept the challenge, the woman’s story strikes a chord with Chisolm for whom, as it happens, the show down with Bogue is very personal.

It is significant in Fuqua’s remake that many of the seven fighters fought in the Civil War, a war that displaced many men and women for whom the deep wounds were slow to settle. Bogue, Chisolm and Robicheaux are all living in the war’s shadows.

Byung-hun Lee and Ethan Hawke in The Magnificent Seven

As with Kurosawa’s and Sturges’ films, the central core of the film, and arguably the most entertaining part, is the recruitment period.  Chisolm knows what he is looking for and the post Civil War Wild West seems to be a fertile recruitment ground.  From the town, he picks up outsider Josh Faraday (Chris Pratt), a gambler and heavy drinker who is handy with a gun but handier with explosives.   They head out in search of Chisolm’s old army friend, Sharpshooter Goodnight Robicheaux (Ethan Hawke) who is suffering from post traumatic stress disorder.  Robicheaux now travels with a handsome Asian assassin called Billy Rocks (Byung-hun Lee) and the two eke out a living taking bets on Rock’s knife throwing skills. The excellent Byung-hun Lee co-starred in Reds 2, but is best known for the fantastic South Korean Western, The Good, the Bad and the Weird (2008).

Along the way they pick up Vasquez (Manuel Garcia-Rulfo), a Mexican outlaw who would rather face death with Bogue than face the gallows, and Jack Horne, a tracker who looks, and lives, like a bear (a star turn from the great actor Vincent D’Onofrio).   When the six men are camping one night, they are interrupted by the arrival of a Comanche warrior with a dead deer on his white horse.  This is Red Harvest (Martin Sensmeir, a Native American) who is an outcast from his tribe. Along with his skills with a bow and arrow, the silent warrior is an expert horseman and tracker. Denzel Washington and Chris Pratt in The Magnificent Seven

As in the original film, it is clear that none of these men are in it for the money, not even Faraday, who needs the money to buy back his horse, lost in a card game.  This altruism transforms them into a team of admirable and noble heroes and we want them all to live.  That we do not feel as close to them as we did to the characters in Kurosawa’s or Sturges’ film might have something to do with the conspicuous absence of interaction with the townsfolk.  There is no love interest and no bonding with the town’s children, for instance and Robicheaux is not comforted by the residents when he has nightmares as was Robert Vaughn’s veteran.  It was the bonding with the locals that gives Pale Rider, Clint Eastwood’s one-man Magnificent Seven, the romantic chivalry  that raises it above the commonplace.

With a few exceptions, the recruits are not replicas of the characters in the Sturges’ film which is, perhaps, the whole point of this remake.  While Denzel Washington has never played in a western before, he has played a variety of law enforcement types, including,  2 Guns, The Manchurian Candidate, The Siege, Courage Under Siege, The Equalizer and Training Day.   Where there is a match, the current version comes out wanting.  For all his acting prowess, Washington is no match for Yul Brynner’s Chris Adams, while Chris Pratt’s serviceable performance comes up short when compared to Steve McQueen’s.  While Sarsgaard is suitably despicable as Bogue, who can rival Eli Wallach in the role of Calvera?

But Fuqua’s point is that the American West was already a melting pot and he wanted this historical accuracy. Strong, pioneer women, represented by Haley Bennett’s Emma Cullen, farmed the land.  Asians were used to build the railroads and there were black ex-soldiers, former slaves and freemen from the North seeking a better life in the west. The film is set three years after the Battle of Little Big Horn, and Native Americans already saw the writing on the wall. As for Vasquez, it was only in 1848 that Mexico ceded California to the union, having lost the Mexican-American war.  How ironic that the defenceless Mexicans in the 1956 version are now represented by a saviour. Charles Bronson’s O’Reilly) was only half Mexican.

The big show down with Bogue comes an hour and forty-five minutes into the film and constitutes its climactic final third   It’s quite a stunning piece of work, showcasing Fuqua’s talent for staging action sequences.

The Magnificent Seven is a solid, entertaining film and a great remake if you haven’t seen the original.  But even if you have, you will be struck by the choice of the three survivors, who, as in the French film, A Prophet, point to a changing demographic in the USA, if not a new world order.