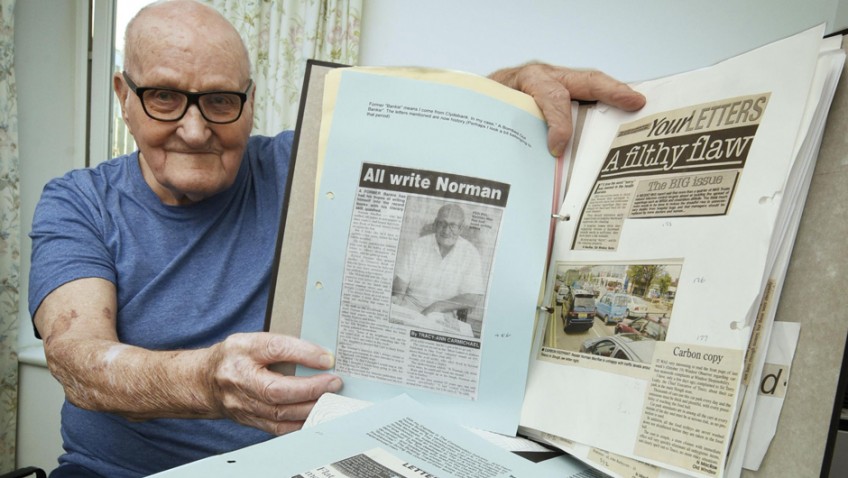 A 90-year-old is trying to set the world record for the most letters printed in newspapers – penning notes on everything from dog mess to Robbie Williams.

Norman MacRae started his quest ten years ago with a letter about boxer Naseem Hamed being stripped of his MBE after being jailed for dangerous driving.

And he hasn’t stopped since with up to two letters a day printed in various local newspapers and even in the national press.

He claims to have had more than 1,500 notes printed, and hopes to keep penning his thoughts in a bid to beat the current record of 3,699 letters set by Subhash Chandra Agrawal from India, who clocked up an eye-watering number until January 31, 2006.

Mr MacRae, a retired government planning inspector, said: “At my highest point, I would be getting four letters published in a week – sometimes even two in a single day.

“I just love seeing what I write in the paper. I’ve always enjoyed writing.

“There was a five-year period when I went between hospitals having major heart operations. I was close to death to be honest but I was able to write letters on and off in my spare time.

“I still get that same feeling as when I wrote my first one. I really enjoy seeing them on the page.

“You never know, if councils listened to what I say then things might be a bit better now.”

Mr MacRae from Bicester in Oxfordshire started writing to newspapers in Windsor, where he used to live, in 2006.

Since then his letters have covered a whole range of topics including problems with dog mess, housing problems and planning applications.

Mr MacRae, who lives on his own, added: “I know that people are very interested in my letters and tell me when they see them.

“It’s very important to give readers this room in the press, if anything they should give more space.

“I’ll probably carry on sending letters to the Oxford Mail until they get fed up of me.

“I guess then I’ll have to find another paper to write in to.”