Home / LIFESTYLE / REVIEWS > / FILM REVIEWS / Despite a fabulous cast, The Legend of Tarzan loses its soul and romance to CGI 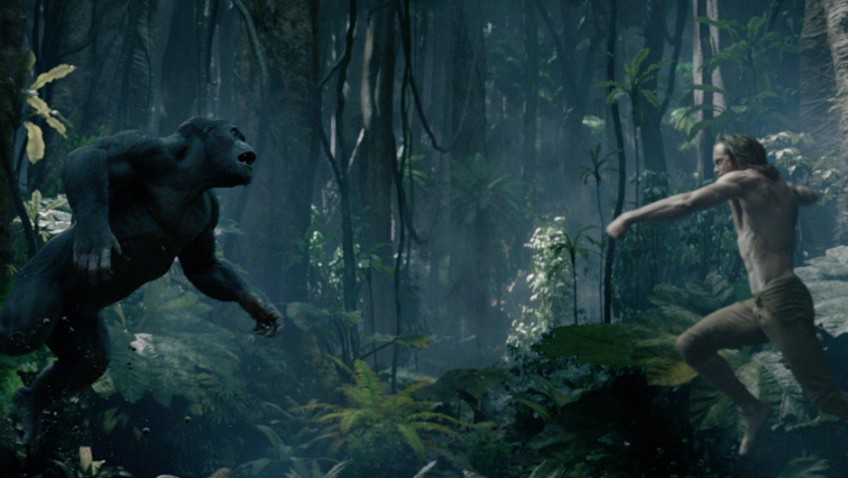 Despite a fabulous cast, The Legend of Tarzan loses its soul and romance to CGI

There have been some 200 movies and several television series based on Edgar Rice Burroughs’ 1914 novel Tarzan of the Apes and its sequels.  Burroughs himself was influenced by Kipling’s The Jungle Book.   The Jungle Book was turned into a successful Disney animated film earlier this year and now a new generation (the film is rated 12A) will have a chance to rediscover Tarzan. 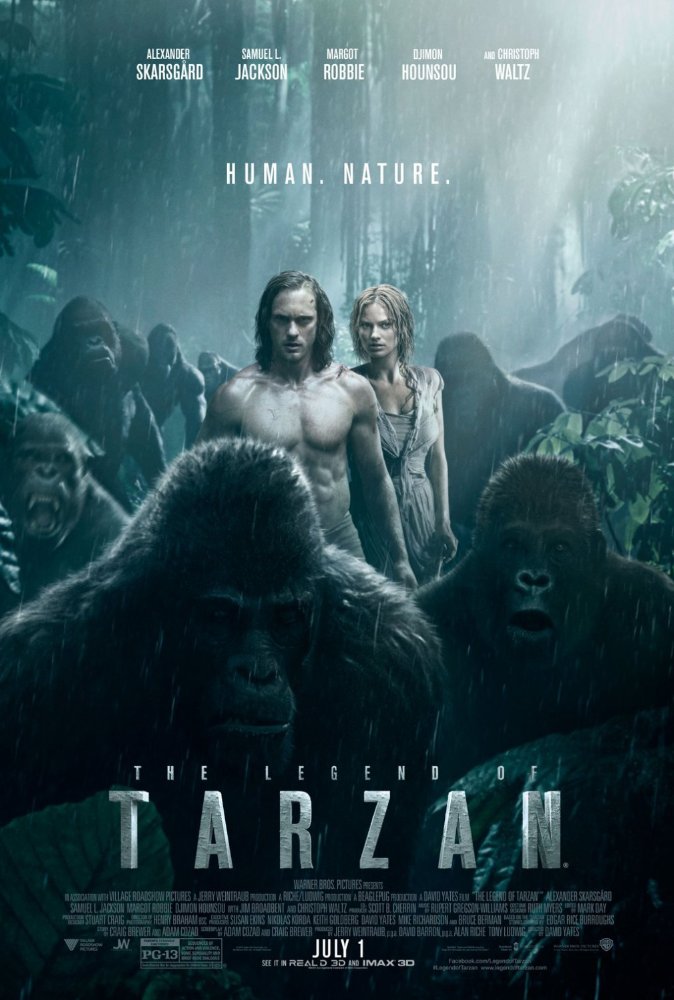 Directed by David Yates, who directed the last four Harry Potter films and will direct JK Rowling’s upcoming Fabulous Beasts (and where to find them), The Legend of Tarzan stars the talented hunk Alexander Skarsgärd (Diary of a Teenage Girl, What Maisie Knew, Melancholia) and the beautiful, feisty Margot Robbie (The Wolf of Wall Street). The film co-stars double Oscar-winning Christoph Waltz, typecast as a villain, and the marvelous Samuel L Jackson, reduced here to a plot device.   Even the minor roles ooze talent, such as Jim Broadbent in a cameo as the British PM; Simon Russell Beale as a mercenary for diamonds trader; and Oscar-nominated Djimon Hounsou as Chief Mbonga, a native of the Congo who symbolises the disastrous consequences of King Leopold’s diamond mining colonisation in Africa. So is this the definitive Tarzan for the 21st century?  Let’s hope not.

To its credit the film, written by Craig Brewer (Hustle & Flow, Footloose) and Adam Cozad has a solid context rooted in King Leopold II of Belgium’s betrayal of the Berlin Convention of 1885. This educational context is the film’s major attribute, particularly for new audiences.

In Berlin, the colonial nations righteously granted Leopold sole ownership of the Congo Free State for his stated goal of improving the lives of its backward, impoverished people. In addition to directly or indirectly killing some 15 million of those people, most of whom he used for slave labour, Leopold was only ever interested in improving his bank account. By 1890 his country was on the verge of bankruptcy, and he depended upon the exploitation of ivory (Tarzan’s beloved elephants), rubber (the habitat on which all animals depended) and diamonds (the infamous mines and native slave labour) to raise money.

Special envoy Captain Leon Rom (Waltz), the real-life head of Leopold’s notorious Force Publique police force is dispatched to the Congo to find revenue sources to clear the debt Leopold amassed, in part, from building railroads across the Congo.   Rom encounters the frightening Chief Mbonga who, after murdering Rom’s men, offers him diamonds in exchange for the Englishman Tarzan.  In a subplot too many Mbonga has a score to settle with Tarzan.

As if on cue, Tarzan (Skarsgärd) and Jane (Robbie) turn up in their old stomping ground at the bequest of American envoy George Washington Williams (Jackson). Williams, who deserves a film of his own, was a civil war veteran, Baptists minister and lawyer, who travelled to the Congo in 1889 to report on the conditions of the African people, and, in 1890, wrote a critical open letter to Leopold.

Though comfortably settled in their palatial stately home, the Claytons of Greystoke eschew their celebrity spotlight and are itching to return to Africa. The loss of a child and the humanitarian pleas of Williams are the only catalysts they need to make the journey. It is 1890, and presumably the Claytons have not been in England long, as their old animal and tribal friends are all happily living where they left them, and welcome the couple with open arms (or sniffs and grunts of approval).

For the adventure that follows, Tarzan, as he becomes in Africa, is going to need all the friends he can get. As it turns out, he has an easier and cheaper way of amassing an army than does Rom.  But when the heinous Rom realises that Clayton is out to sabotage his plans to do Leopold’s bidding, his determination to deliver Tarzan to Mbonga turns very personal. 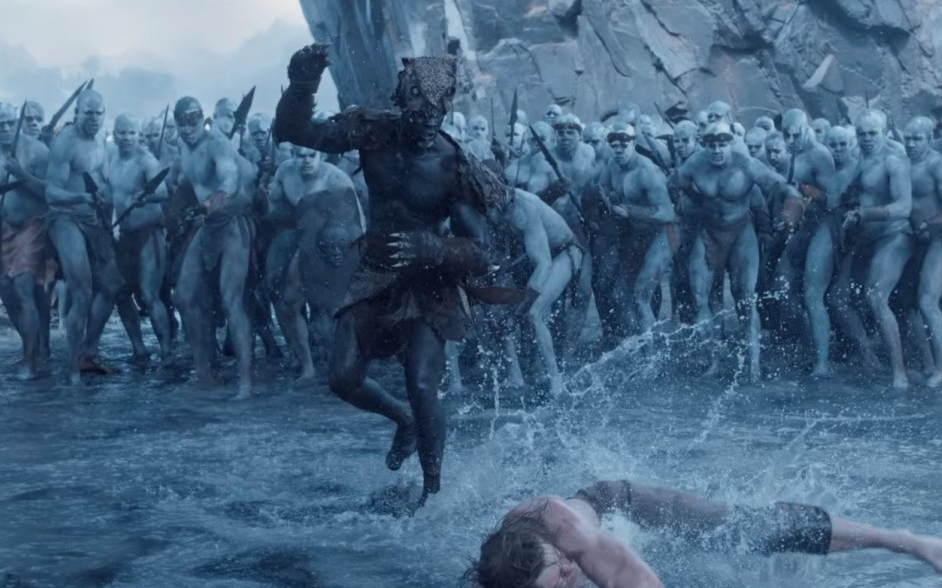 Djimon Hounsou in The Legend of Tarzan

While The Legend of Tarzan is aimed at the family market, older audiences will be curious to revisit a character they grew up with, while women and men from 18-50 will want to fantasize over the romance between the famous feral child- turned fabulously wealthy aristocrat (Skarsgärd is 39) and his fortunate wife, the luminous Robbie.  Unfortunately, everyone is likely to be a bit disappointed.

Perhaps Yates has been directing big budget adaptations of children’s books for so long that he has forgotten how to make characters sexy or even romantic.  For all his acting abilities and his muscles, this Tarzan has zero personality and surprisingly little sex appeal.  Also problematic, the awkward flash backs filling in new audiences on young Tarzan’s and Jane’s lives in Africa and their meeting tell us too little to be informative, yet provide a glimpse of another movie, one which we do not see.  Nor do we learn how Tarzan, raised by apes, became not only literate in English, but a linguist and well-educated man before he even arrived in England.

While the five weeks of filming in Gabon adds to the atmosphere of the African scenes, the cast remained behind at Harry Potter’s Leavesden studios. They are in Africa thanks to that nifty airline called Computer Generated Images (CGI). And this is where the really big problems begin.  In the tree-swinging scenes, Tarzan is more like Spider Man than an ape boy.  In the scene in which Tarzan takes over a slave-carrying Belgium train, he is the spitting image of Lawrence of Arabia.  The big set-piece attack to prevent Frum (Russell Beale) receiving the diamonds and delivering his mercenary army, looks like a parody of Cecil B DeMille directing Noah’s Ark.  The CGI takes over the soul of the timeless story and distorts it to such an extent that nothing left to the imagination — and yet everything is left to imagine.