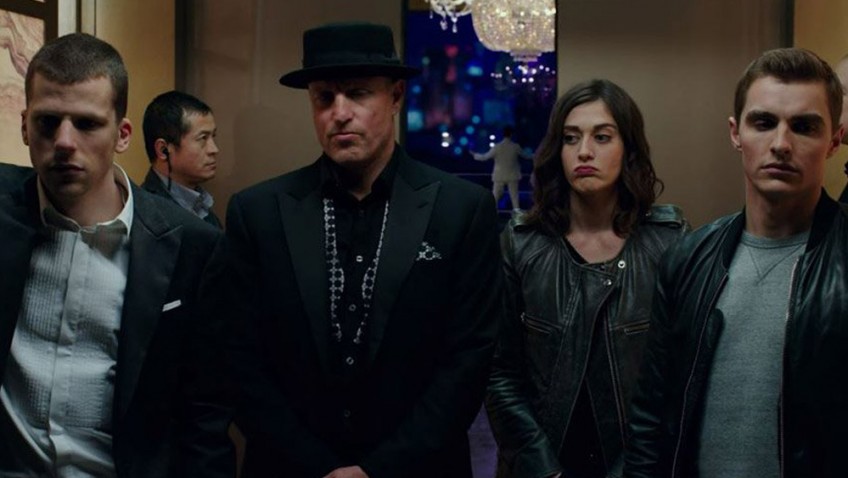 Now You See Me 2 is a sequel to the 2013 heist thriller directed by ‘Transformer’ director Louis Leterrier that somehow grossed 350 million dollars.   When a film makes that much money, you make a sequel – even if no one really wanted one.  Though the director has changed, and the two lead female stars, everything else, from the male cast and screenplay writer (Ed Solomon, based on characters by Boaz Yakin and Edward Ricourt) to the format and style is the same.  The budget for the sequel has risen from $75 million to $90 million, still a bargain when you consider the number of British and American stars involved. 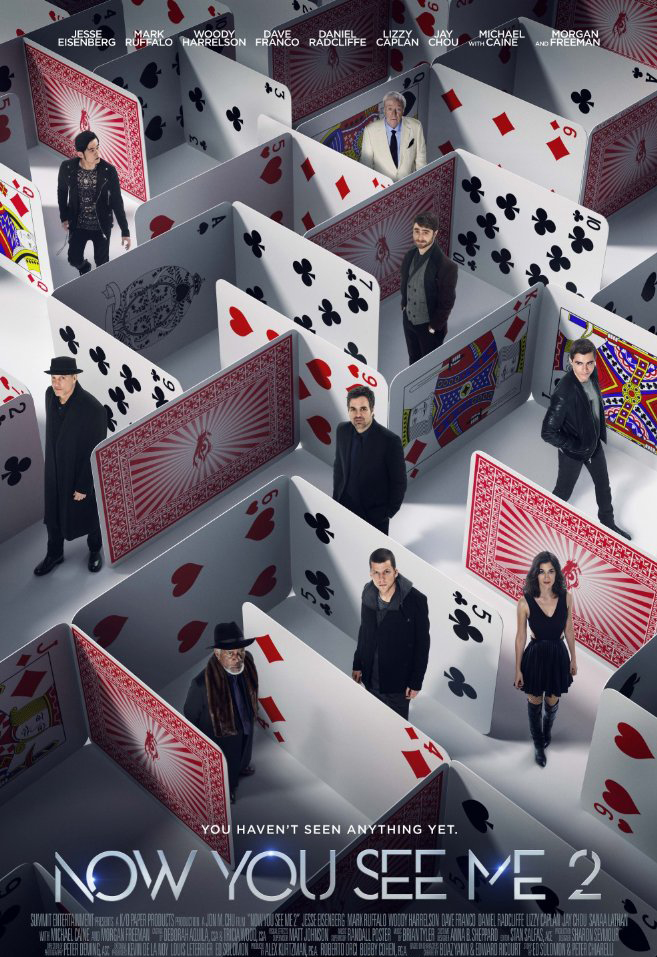 For in Now You See Me 2 a large number of well known actors and a few up-and-coming names, including Morgan Freeman, Michael Caine, Mark Ruffalo,  Woody Harrelson, Jesse Eisenberg, Daniel Radcliffe and Dave Franco try very hard to do some acting on the way to collecting their pay cheques.  That they do not succeed is, with a couple of exceptions, hardly their fault.   ‘Step-Up’ Director Jon Chu was not hired to give the film any subtlety or soul, but to manage crowds and try to make his characters look cool doing CGI magic tricks that you don’t believe for a second.

The first half hour of Now You See Me 2 is all but incomprehensible for anyone who has not seen, or only vaguely remembers, the original.   When you have finally understand it and have figured out who everyone is and what they are up to, you might wish you hadn’t.  It’s all very much, ‘who cares’, not to mention anti-climactic.  This is because, as with the original, the whole plot is a trick within a trick.  And as with the original, but even more so here, you have to wonder who could afford the time and money to orchestra such an elaborate and costly trick and why they would want to do so.

There is a prologue recited to the audience by Morgan Freeman as Thaddeus Bradley, now serving a prison sentence thanks to a man on a revenge mission named Dylan Rhodes (Ruffalo).  As we are to see in an extended flashback, Bradley is a magician who exposed the tricks of other magicians on television. He was attempting to do just that when the Houdini-like father of young Dylan Rhodes disappears while performing a daring underwater trick.  Rhodes, who has grown up with father issues, has blamed Bradley for his loss ever since.

The plot needs to be summarised if only to give you an idea of how silly it is.  A team of master magicians called The Four Horsemen: Danny Atlas (Eisenberg), Merrit McKinney (Woody Harrelson) and Jack Wilder (Dave Franco) are in hiding and are awaiting new orders from the Eye, a society of magicians that has recruited them. The Horsemen are wanted by the FBI but are adored by the public who, later in the film, play its part in various ways.  An illusionist named Lula May (a very annoying Lizzy Caplan) is the female addition to the team.  Dylan Rhodes works by day for the FBI and moonlights as their handler.

Rhodes leads the Horsemen on a new mission, to expose a corrupt businessman named Owen Case (Ben Lamb).  Insofar as Case’s company produces software that steals data from its users, there is something of the Wiki leaks in reverse about this plot to expose him.  Through trickery, edited so quickly that you can blink and miss it, the magicians infiltrate Case’s company and use the launch party to expose his corruption.  But just as this is happening, Rhodes is exposed by a jealous FBI agent to his boss, Sanaa Lathan (the new Agent Natalie Austin).

Having been exposed as the launch crashers, and with the FBI on their heels, the Horseman escape down a metal tube, but take the wrong one (this, too is trickery) and end up being captured by Merrit’s evil, vengeful twin, Chase McKinney (also played by Harrelson). They find themselves in Macau, in the palatial home of technology billionaire Walter Mabry (Radcliffe) an associate of sorts of Chase. 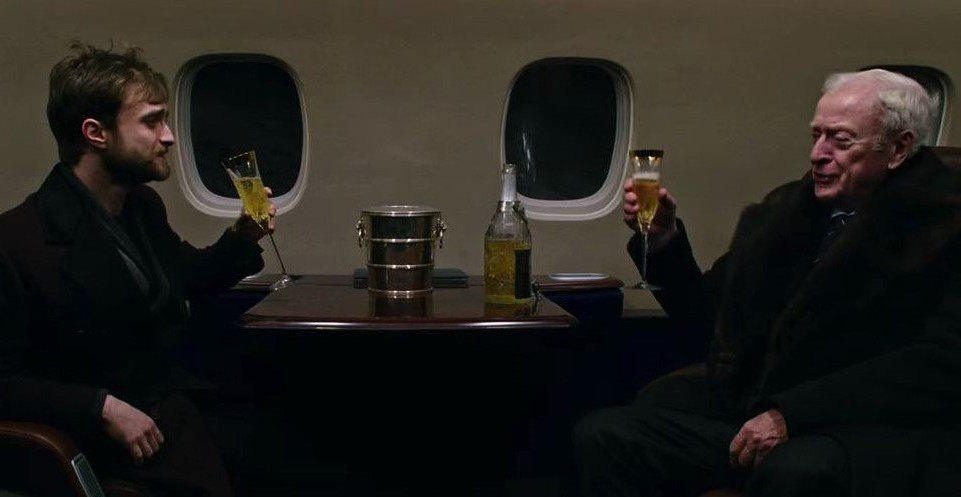 Michael Caine and Daniel Radcliffe in Now You See Me 2

Here is where things really get complicated.  Mabry tells the Horsemen that if they want their freedom and their lives, they have to steal a device that has been developed by Case that mines data.  Whoever possesses it possesses a power equivalent to the ring in Wagner’s opera of the same title. This prize, however, happens to be located not under the Rhine, but underneath a casino in Macau.  After arguing amongst themselves as to whether to go along with the plan, they decide to do so, determined never to deliver the device to Mabry.  In order to execute the plan, they need magic gear, and head to a magic shop run by Li (Jay Chou) and his grandmother.  These locals play a big role in the film later on and are not quite the modest shop keepers they seem.

Meanwhile Rhodes, whom the Horsemen distrust as an FBI informant and after the botched Owen Chase fiasco, follows the Horsemen to Macau to help them. He is accompanied by Bradley who has persuaded Rhodes to help him escape from prison. Bradley convinces Rhodes that he alone has the contacts to help save the Horsemen.  He also holds the key to helping Rhodes seek revenge on Arthur Tressler (Michael Caine), whose company cheated his mother out of the insurance money when his magician father died.  Tressler is also the stepfather or father of Mabry (there are father/son issues here, too).  But we are meant to suspect that Bradley is a serious associate of Tressler when he locks up Rhodes in a case identical to the one in which his father died, and lowers it into the sea.

If this plot summary is preposterous, it does not include the final quarter of the film (which is the not-to-be-divulged punch line) which is where you throw your hands in the air: not to applaud, but to pray for deliverance.  The action is captured in a slick, fast-paced manner that leaves no time for characters to develop, let alone react normally to the many situations in which they find themselves.  Suddenly, in a single shot at the end, you might be surprised to see Jack Wilder kissing Lula and wonder whether you dozed off during the romantic part of the movie (you haven’t).  There is no tension as you never know what is going on and are always confident that a saving trick is just around the corner.   Most disappointing of all for a movie about magicians, the tricks that punctuate the action are done by CGI wizards in post production and look as phoney as they are.