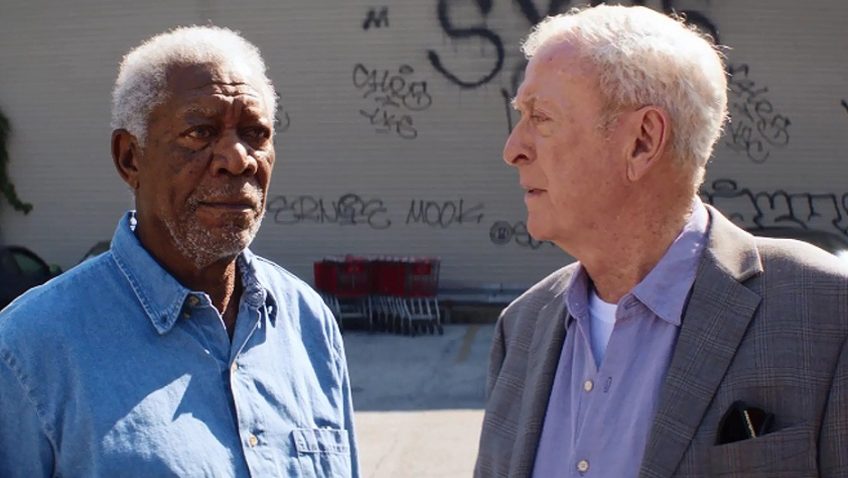 With the value of the grey-dollar/pound now recognised by film producers and distributors, there is a new genre in the making that can be called OAPs Behaving Badly. Into this category you can put heist comedy Golden Years, from last April; last month’s dire romcom starring Joan Collins and Pauline Collins, The Time of Their Lives and The Hatton Garden Job (the first of a reported three adaptations of the real event), to be released shortly. So it’s little wonder that Warner Brothers decided it was time to remake their 1979 hit comedy Going in Style. If director Zach Braff’s (Garden State) remake was conceived before the real septuagenarian burglars robbed Hatton Garden and before Sir Philip Green deprived his BHS staff of a pension, his film certainly benefits, if not from the national zeitgeist, than from today’s demographics. It’s a good thing, too, as Going in Style

does not benefit from much else.

Even for those who did not see Martin Brest’s original 1979 version, or Golden Years, the low-budget, TV-style British version of Going in Style released last year, the story seems familiar. Three retired friends, Joe (Michael Caine), and roommates Willie (Morgan Freeman) and Albert (Alan Arkin) are furious when they learn that their former company was bought out and their pension fund intentionally fell through the cracks of the restructuring process. Joe is already livid after a trip to see his patronising bank manager. He learns that his daughter and grand-daughter, who have come to live with him, will be homeless as he is behind in the mortgage. During his dead-end discussion, the bank is robbed, leaving Joe more inspired than frightened.

When Joe proposes the idea to Albert and Willie, they think he’s joking and reject the idea as preposterous. But Willie has his own problems. His communication with his family is limited to Skype and he (unbeknown to his friends) needs a liver transplant. When it is suggested that they target their pension bank and take no more than the amount that would have been due to them, Albert comes on board. We know there’s no such thing as a victimless crime, but these solid senior citizens feel that revenge is, in this case, justice.

They consult with Murphy (Peter Serafinowicz), Joe’s former son-in-law, and a petty felon, who recommends Jesus (John Ortiz) as a man qualified to show them the ropes. Joe will eventually remember where he had seen Jesus before, just as a cute little girl in the bank will remember Willie’s singular watch, with its picture of his granddaughter. But when the trio attempt shop lifting at a local supermarket as a kind of dry run to the big heist, it is sharp-eyed manager Keith (Kenan Thompson), whose memory proves the most threatening.

Kenan Thompson’s Keith is the only actor in the film who made me laugh, as he has a couple of good lines and a perfectly timed delivery. Alan Arkin has his moments, but somehow by the time he got going I couldn’t summon up enough good will to laugh. But most of the humour falls flat, and comedy or not, the plot is too poorly constructed to be satisfying.

To say too much on this subject would be a spoiler, but if you were a suspect in a heist and suddenly deposited the equivalent of three month’s mortgage in the very bank you robbed, someone is bound to be suspicious. And while the trio cleverly mastermind their alibi, Jesus forgot to tell them not to hand write a note and leave it on a bundle of fresh bank notes.

There are other curiosities, too. We are specifically told that Willie and Albert have been roommates for 26 years, despite the fact that both could afford their own apartments (their pensions would have been $40,000 a year, roughly the same as a teacher). Anyone would assume they were gay, particularly as Albert rejects the advances of supermarket worker Annie (Ann-Margaret), whom, we can only assume must be charmed by his musical talent. Then, suddenly, Albert not only gives in to his suitress but they become an item. Similarly, but not that it really matters, it seems impossible that Albert would not have known about Willie’s serious medical condition. No questions asked about his doctor appointments, no tell-tale phone calls received from a doctor, no prescriptions, no letters from the insurance company – in 26 years?

None of plot anomalies would matter if the film made us laugh or cry. Regrettably, the poignant state of the union message about what it is like growing old alone in American that weaves through the 1979 film, is conspicuously absent here.

It is, however, refreshing that the characters buck the stereotypical image of retired people. Far from sitting around deciding what cruise to take or what golf club to join, the three protagonists live modestly and face a financially insecure future. Whether or not you believe them or really care about them, is another matter.

Braff selected a trio comedians comparable to the original film’s Art Carney, George Burns and Lee Strasberg, except that Morgan Freeman and Michael Caine have been walking through their roles for so long now that they have forgotten how to act, let alone make us laugh. Alan Arkin is still one of the funniest men on earth, but even he could not work miracles with Theodore’s Melfi’s script and Braff’s direction.