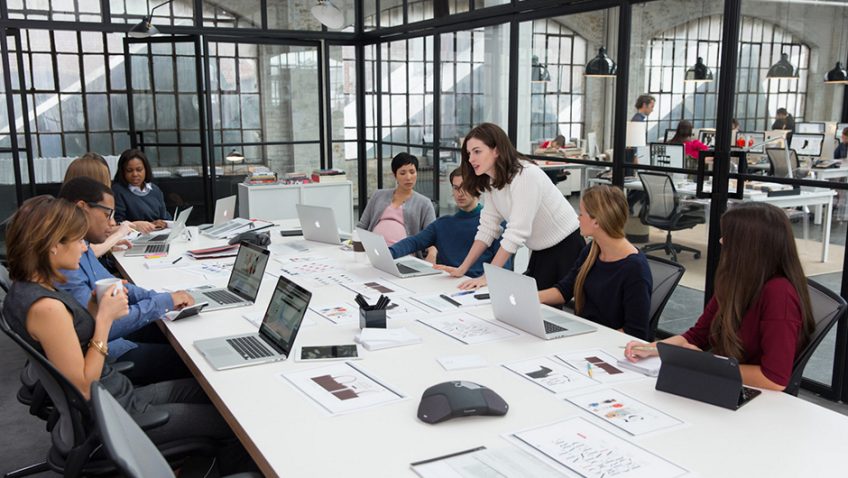 Anne Hathaway is remarkably good as the self-doubting wonder woman

The talented Producer/Writer/Director Nancy Meyers, now 65, has, in the films she has directed, given older-age relationships an entertaining, comic spin, but with enough insight to give films like What Women Want, Something’s Gotta Give and It’s Complicated a gravitas seldom found in pure escapist entertainment. So it was with great anticipation that un- and underemployed over 50s, and young bosses terrified of working with older staff, awaited The Intern

, in which Robert De Niro’s Ben Whitaker, 72, becomes intern to Anne Hathaway’s high powered executive, 40 years his junior. The big surprise is not that The Intern

is too dark and sentimental to be a comedy, but that it’s not really about an old intern at all.

Ben Whitaker (De Niro) is not one of the thousands of unemployed over 50s who are desperate to find work to make ends meet; and, lacking contacts and/or up-to-date skills are equally desperate for internships. Perhaps Meyers, a multi-millionaire never short of work, cannot imagine this scenario. Or perhaps producers cannot imagine any audience would want to be reminded of it.

Ben is a well-off, retired business executive (he published phonebooks no less!) and widower, who, after travelling the world, wants to fill a hole in his life. When he comes across an advertisement for an older intern, he is not concerned about taking an opportunity from someone desperate for a chance at a second career (Ben certainly is not). He jumps at the prospect of a two- week diversion.

The first hurdle is the application form, which, it turns out, is not much of hurdle for this applicant. ‘Written CVs are so old fashioned,’ it warns and suggests that the applicant make a video and post it on UTube. While a neighbour Ben’s age with designs on him admits she would be lost, Ben quickly masters the technology (which he can afford) and gets the job.

He finds himself, overdressed in a suit and seriously over-aged, in a busy, open-plan office (coincidentally, the very building where he published phonebooks!) – talk about the value of experience! He is assigned to Jules Ostin (Hathaway), the stunning founder and CEO of About the Fit. This is a ‘Net-a-Porter’ type online shopping company that has enjoyed an equally meteoric rise. Rather surprisingly for a hands-on, control-freak executive, Jules is unaware that she has approved the intern scheme, and does her best to ignore Ben.

This would be Ben’s second and final obstacle, but Ben is nothing if not a strategist, as controlling and resourceful as Jules, and much more self-confident. He makes himself indispensable, not only to all the young staff (girl trouble, esteem issues, drinking on the job problems, etc) but to Jules. 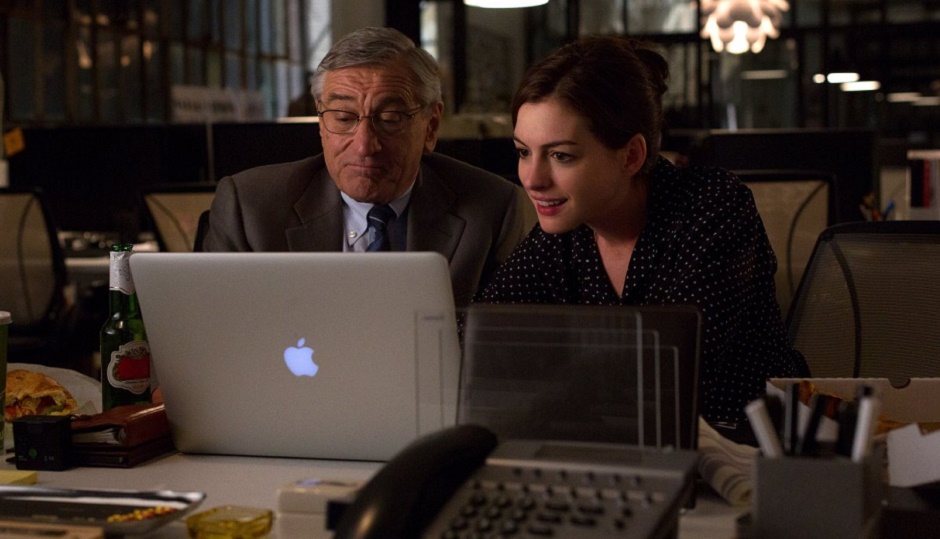 Robert De Niro and Anne Hathaway in The Intern

For behind the efficient executive is a woman overwhelmed with work, guilty about never seeing her precocious young daughter, and distraught (but understanding) that her stay-at-home husband (Anders Holm) is having an affair. While this family situation introduces a dark tone to the film and rings true, what does not is that a wealthy, high tech couple has still not switched to electric toothbrushes.

Within days of substituting himself for Jules’ chauffeur (he knows all the best routes), Ben is accompanying Jules, first class, to San Francisco where she is interviewing a CEO. Much to Jules’ dismay, the investors have urged her to find a CEO to share the load. Ben, however, who witnesses Jules showing the warehouse workers how to fold the garments before shipping, knows better. What CEO could demonstrate such attention to detail?

In fact, Ben, the intern, has nothing to learn and knows everything. He even knows how to sweep the beautiful (and single!) in-house masseuse (Rene Russo), ten years his junior, off her feet and they become lovers. Jules becomes dependent on Ben, not only as a father figure and marriage counsellor, but as that CEO that he claims she does not need.

There are some funny lines; the film is always entertaining and Hathaway, at least, is remarkably good as the self-doubting wonder woman. Hathaway is so convincing in fact that The Intern

quickly becomes much more about a businesswoman who cannot run her home or her business without a man than about an older intern’s struggle to fit in with a young staff.

There are two minor scenes that are supposed to be funny, but merely contribute to the sexist undercurrent in the film. In the first, Ben tells a love-sick young colleague, Jason (Adam Devine) that he always wears a handkerchief in order to be on hand to lend it to women. ‘Women cry,’ he proclaims to the staff of a business founded by a woman.

Later in the film, Jules’ ditzy, secretary, Becky (Christina Scherer), who complains of being undervalued, tells Ben that she went to business school at Penn (Meyers is from Philadelphia – home of the prestigious Ivy League University of Pennsylvania). If Becky was graduated from business school at Penn she would, first of all, call it Wharton, and secondly, would probably not be anyone’s secretary, as it’s one of the top MBA schools in the world. But even if she were Jules’ secretary, could she possibly be so stupid as to break down in tears about some article that correlates weight gain with too little sleep?