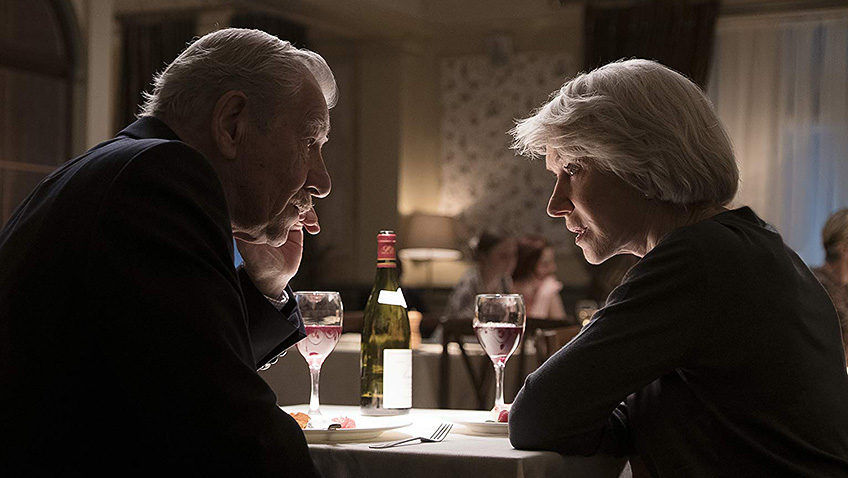 Writer/director Bill Condon won an Oscar for his screenplay of Gods and Monsters that saw Sir Ian McKellen nominated for best actor. The two reunite in The Good Liar

for the screen. With Helen Mirren and Downton Abbey’s Jim Carter joining them, the film is a lot of fun, but there are more holes and incredulities than thrills in this disappointing thriller. From the outset, though, the filmmakers play an enticing game with two topical subjects that concern older singles: internet dating and elder fraud.

Though a bit the worse for wear, charmer Roy Courtnay (‘looking for romance’) has his virtual sights on widow Betty McLeish (‘looking for companionship’) through an internet dating site. With a cigarette in hand he ticks ‘no’ next to ‘Smoker’ while, whisky sipping Betty ticks ‘Non-Drinker’. Real names (or are they?) are revealed when they meet in a restaurant and are pleasantly surprised by what they see (or are they?)

What Roy is not about to reveal to Betty is that he and his business partner Vincent (Jim Carter) operate a high-stakes financial con game in their sham office. As we see in a series of montages, they use various identities and ‘actors’ to impersonate investors and the police to stage a raid when it is handy to disperse quickly.

Knowing that Roy’s intentions are not honourable, we cringe when Betty volunteers that she paid cash for her car – and house. Betty’s compassion for Roy’s sudden ill-health as he limps up the stairs results in him moving into Betty’s dull suburban house that he secretly abhors. In fact, the house seems equally ill-suited for an outgoing recently widowed woman like Betty, a retired academic at Oxford.

When the two are settled into a platonic life together, you again wince when Betty reveals that she has savings of about two million pounds. We are constantly reading in the paper about little old ladies being duped by clever fraudsters on the phone or during house calls, but there are three reasons why that scenario does not ring true here.

The first is because Betty, is a former professor of history at Oxford, so probably someone who keeps up to date with the news and is not easily duped. The second is that she makes clear when Roy walks into her bedroom one night, that she has not lost her heart, let alone her head, to this would-be seducer. And the third is that Betty is played by Helen Mirren who does not do vulnerable victims.

So, most viewers will know that something is going on when Betty decides to join Roy in investing in a get-rich-quick scheme recommended by Roy’s trusted accountant, none other than Carter. For reasons designed to allay any fears and to maximise their investment, and each are given a keypad to track the investment. 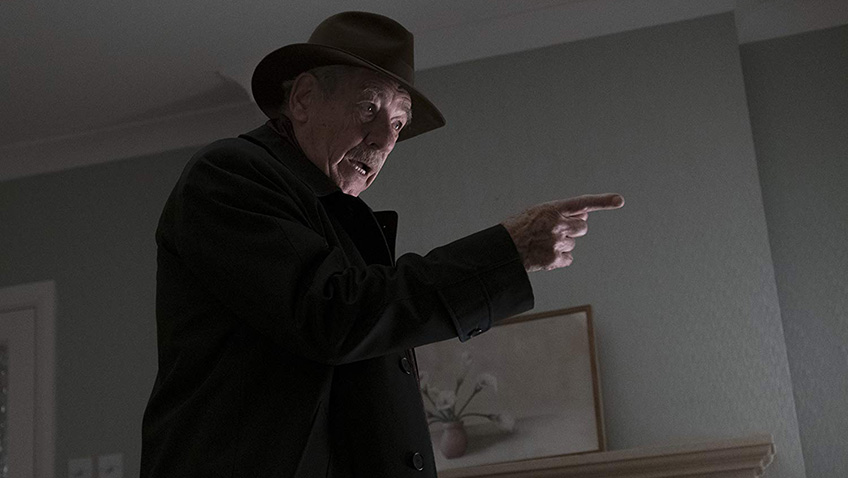 Ian McKellen in The Good Liar

Throughout this relationship Betty’s grandson Steven (Russell Tovey) has been suspicious of Roy, but he is helpless to persuade his grandmother against this investment. Or maybe, as with everything we are watching, things are not what they seem.

From time to time we see a mysterious car outside Betty’s house that is making Roy increasingly uncomfortable. All the elements are in place after this careful build-up and we wait with more curiosity than suspense for something to happen.

Betty, who, after an episode, is obliged to tell Roy that she suffers from a potentially fatal heart problem, wants to live a little, and persuades Roy to take a city-break in Berlin, instead of the Caribbean island holiday he prefers. She neglects to mention that Stephan, who is doing a doctorate on Albert Speer, will be their guide.

With the Berlin trip, the slow burning, but mysterious dating game turns into a long expository flashback out of left field. The fact that this big reveal is narrated as a flashback not only diminishes its dramatic impact but highlights how far removed it is from what we have been watching. It is like that moment in an Agatha Christie novel where Poirot gathers all the suspects around and explains what we have been reading for the past few hours. But if a very careful reader stands a chance of figuring out whodunit in a Christie mystery because she plants clues, no one who has not read the book can possibly be prepared for the backstory here. The elaborate and perfectly executed con becomes increasingly unrealistic, particularly for someone not backed by Interpol or MI6 and a talented language coach.

McKellen, who has given Bill Condon two memorable performances, in the aforementioned Gods and Monsters and Mr. Holmes, is a delight to watch, and his first pairing with the superb Dame Helen, is the main appeal of this film. Though they do not disappoint in a concept and premise that is perfectly suited for both of their talents, they deserve better films – and so does the paying public.