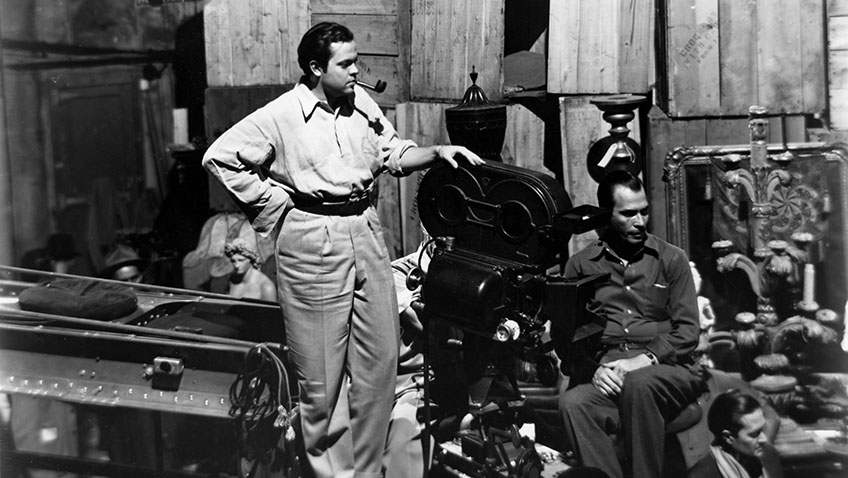 The inspiration for the V & A’s thrilling and intimate exhibition ‘Frida Kahlo: Making Herself Up’ was a sealed cupboard, discovered in her home 50 years after her death. It contained personal artefacts that provide a new perspective in which to view her life and art So, in The Eyes of Orson Welles

, director, cinematographer and writer Mark Cousins finds inspiration from boxes of Orson Welles’ margin doodles, sketches, drawings and paintings, most of which have never been seen before. Just last year Beatrice, Welles’ third daughter with his third and last wife, the actress Paola Mori, bestowed his archives to The University of Michigan, Ann Arbor. But Cousins has also been granted exclusive access to a treasure trove of drawings and paintings at Beatrice’s home in the Nevada desert. ‘She is 60 but still a rocker chick who sometimes drives with no hands,’ Cousins reports to Welles in his insightful, lyrical and analytical love letter to the iconic artist, writer and theatre and film director who died in 1985.

The film opens with an aerial shot of Manhattan, and Cousins points out that Welles would have instantly noticed the absence of the Twin Towers. ‘All things come to an end – that was one of the themes of your movies,’ he says, turning a cliché into a thought provoking observation. ‘Some things never change, but much has,’ including the internet and mobile phones: ‘the addict in you would have loved it.’

The cash-challenged, but resourceful independent filmmaker in Welles would have loved it, too, for relatively early in his career, Welles struggled to raise finance. Cousins used two, handheld cameras that were not available in the 1960s, ‘70s and ‘80s: one a tiny HD camera and one a 4K camera that can double for a Steadicam, without the need for a track and dolly (think of the famous tracking shot in A Touch of Evil and The Trial to name just two). With these he maintains the intimacy of the artwork, much of which was, like story boards, never intended to be displayed as art.

As Welles left no autobiography, Cousins steps in to ask if now, through his visual legacy which began when Welles was 9, we can tell his story anew. The story begins in Chicago, the windy city of skyscrapers where the young boy would spend his time looking up. And in a brilliant montage Cousins illustrates his contention that Welles ‘became the greatest ever film maker of looking upwards’ by showing us the techniques Welles used to make us look upward – even miniaturising characters.

Young Orson’s love of drawing brought him to the Chicago Art Institute whose long, oblong, parallel translucent ceilings found their way into Citizen Kane and The Trial.

After a stopover to collect his crate from the University of Michigan Cousins announces the structure of his extensive analysis that covers (in varying degrees of detail, all of Welles’ films and plays; dozens of drawings; his favourite locations; his women; and comparisons between Welles’ drawings and film sets with artists such as Goya, Andrea Mantegna and De Chirico. There is also an angry abstract painting that, according to Beatrice, her father made after being removed from his masterpiece, A Touch of Evil, which, though now restored, was compromised by Universal’s callous changes.

Cousins divides the film into three main ‘acts’, to lend the material a fittingly mythical quality. Welles was, as Cousins reminds us, a great theatrical (and radio) writer/actor/director as well, and his productions of Shakespeare remain hard to beat. His Mercury Theatre production of Julius Caesar was so famous that it was partially recreated in Richard Linklaker’s historic and biographical romcom Me and Orson Welles. 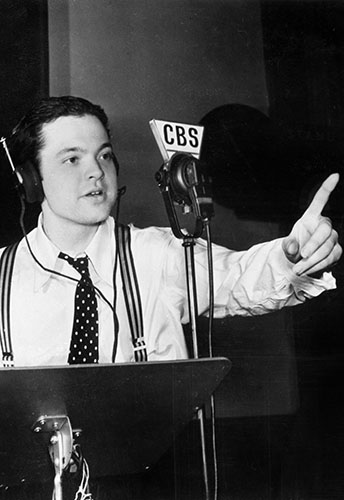 The first act is Pawn, in which Cousins looks at Welles’ political upbringing. If you have any doubt, we see a 1960 TV interview in which Welles states, ‘I don’t take art as seriously as I do politics.’ Although Welles’ mother, Beatrice Ives Welles, died when he was 9, her influence was life-long and formative. Welles was born into an affluent family in Kenosha, Wisconsin in 1915 although he moved to Chicago in 1919 after his parents’ divorce. His mother a pianist, was, Cousins tells us, the founder of the Woman’s Alliance, which campaigned to help the poor and the Jews in Russian. As an elected official in Kenosha, she campaigned to give every child a Christmas tree. Cousins shows us many versions of the Christmas trees that Welles drew and painted throughout his life.

His mother’s legacy is apparent in a clip of a Q & A in which Welles explains why he changed the ending of Kafka’s The Trial. ‘Because the book was written before the Holocaust,’ Welles states indignantly, as though the answer were obvious. ‘I am not Jewish, but we are all Jewish since the Holocaust. I could not bear ‘K’ submitting to defeat.’ This ‘act’ also covers his travels as a teenager to Ireland and Morocco to capture the faces of ‘ordinary’ people in extraordinary ‘character’ sketches.

The second act is Knight in which Cousins covers Welles’ three marriages, many romances (his segment on the close-up, diagonal shot of Rita Hayworth in the burning sun, during which Welles reminds the make-up artist, ‘Rita does not sweat, she glows’) and an extensive analysis of Welles’ chivalric ideals. A large painting of Don Quixote hangs in Beatrice’s house, showing Quixote profiled against a burning sun, like an Icarus, doomed to fall.

The third, and arguably richest and most revealing segment, inspired by Welles’ drawings, is King, in which we look at Welles fixation with power, corruption and atmospheric, mist-covered castles in plays like Macbeth and Henry V (Welles’s tragic-comic Falstaff in Chimes of Midnight receives a lot of attention) and of course, Kane, modelled after the real life, right-wing newspaper baron William Randolph Hearst. Welles’ drawings might have become so close to him and so real that he inevitably cast himself in his works. If Chimes of Midnight, seems like a paradox, Cousins sees through it. ‘You wanted to be Falstaff, Orson, but let’s face it: you were Hal.’ (King Henry V).

An epilogue introduces the Jester, but perceptive as this min-act is, at this exact point we enter into information overload. This is not helped by Cousins’ distinctive voice and cadence. It is effective for a while, but long-term exposure should be avoided. Even if it does not annoy you, the monotone pace and volume can be hypnotic, if not sleep inducing.