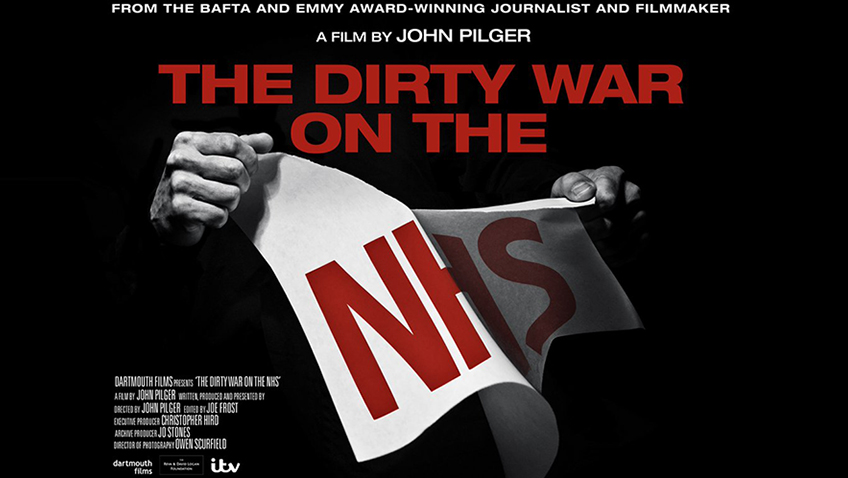 John Pilger delivers an impassioned, well-timed warning about the NHS

This emotionally charged, angry and urgent polemic from John Pilger, released bang on two weeks before the general election, would have been more useful to voters if it had been broadcast and seen by millions. Those who refused to respond to Pilger’s invitations to appear in the film – Baron Prior of Brampton (Chairman of the NHS); Simon Stevens (Chief Executive of the NHS) and Matt Hancock (Secretary of State for Health and Care) – may not be the target audience for the film, but should be.

The film begins with two unidentified talking heads discussing the phenomenon of patient dumping, a US import now. CCTV footage shows a vulnerable woman groaning in pain and/or fear, being led by a group of overweight men in black uniforms to a bus stop and abandoned. The unidentified talking heads reappear later in the film, this time identified as the charitable heads of shelters who have witnessed dumping. One man was discharged from hospital nine days after open heart surgery and dumped without the thought of his medicine or aftercare.

If you do see the film, be prepared for some poor editing, straight-to-camera speeches from a man whom you might recognise, or figure out, is Pilger himself, and talking heads who reappear without captions, as though we are expected to remember everyone. But also, be prepared for some shocking stories, earnest warnings and the kind of revelations that make your blood boil.

Pilger tells us the film is a tribute to the NHS and as part of this, we get the familiar history of the NHS told with familiar archive footage. The film, he says, is also about democracy. Austerity has heightened the class divide and a man identified only as Dr Youssef El-Gingihy tells us the NHS has become a two-tier system. Politicians will not abolish it, but ‘it will become a third-class service’ for those without private care. Though his caption omits this, El-Gingihy is a general practitioner at Bromley by Bow Health Centre, in east London, so he is well placed to speak on such matters. Nor does Pilger mention that El-Gingihy is the author of How to Dismantle the NHS in 10 Easy Steps: The blueprint that the government does not want you to see

– perhaps because to do so would be seen as a plug for the book.

Finally, Pilger says, the film is a warning, and we see that several of those 10 steps are underway. First there is the complicated and costly bureaucracy and external advisers. The government’s spending on management consultants in the NHS has trebled in the past 3 years, despite pledges by successive health secretaries to reduce this burden. And the Brexit referendum was not, you will hear, the most destructive decision David Cameron ever made. In 2012, the NHS of Aneurin Bevan and William Beveridge was abolished by The Health and Social Care Act of 2012, which was signed into law by Cameron as a step forward.

In fact, it was Ken Clarke under Thatcher who introduced a Market into the NHS, and Tony Blair who expanded John Major’s complex PFIs, (public finance initiatives) as a way of reducing government borrowing by bringing in the private sector.

Pilger gives us two exemplary illustrations. The first is the story of the late 66-year- old Trevor Moncreiff, a Leicestershire father of four, who it has been established, probably would have lived with prompt treatment. When, one day, Trevor suffered a heart attack they phoned for an ambulance. Unfortunately for the family, though bearing the NHS logo, the ambulance was provided by a company called Amvale. Their service came complete with a second-hand defibrillator that malfunctioned and had not been tested for months. The clueless crew waited 13 minutes before calling for back-up (leaving a message!) before the dying man was hauled around in search of a hospital that could treat him.

Equally depressing is the saga of Hinchingbrooke Hospital, the first NHS hospital to be managed by a private firm: Circle Health. Launched with government propaganda (Vince Cable was a great advocate of this “business” model), it was not long before the Care Quality Commission put the profit-first hospital in special measures. In January 2015 Circle’s charismatic director, ex-Goldman Sach’s entrepreneur Ali Parsa withdrew from the 10-year contract after 3 years, leaving the taxpayer to foot the bill and the NHS to turn around the failing hospital

Not finished with Healthcare, Parsa founded Babylon Health, a company that enables users to use a mobile app to have virtual consultations with doctors and health care professionals. Matt Hancock is a big fan of technology in health care and is accused of breaking ethics rules by promoting Babylon’s “GP at Hand” app. Pilger goes on the attack in an interview with the brave representative of Babylon, and then a GP stresses the importance of seeing a patient as machines have no “emotional intelligence” and cannot assess body language or what a patient chooses to omit.

For a taste of what we can expect if we start to unravel the NHS (as one talking head reminds us, once it’s gone you can never get it back) Pilger travels to the USA where 50 million Americans cannot afford healthcare, or their health insurance is rendered useless by high deductibles. Almost half of American cancer patients lose their life savings paying for care.

Whistle-blower Dr Linda Peeno had a lucrative job in the managed-care sector before she suffered a pang of conscience after denying a man a necessary transplant operation to save her employer half a million dollars. She was rewarded for her “decision” with a promotion and a six-figure salary. An even more harrowing story involves Cigna Worldwide Healthcare (who are already in the UK). Everything was in place for a 17-year old girl to be rushed to the operating room where a healthy liver awaited her when Cigna cancelled the operation on the advice of a second opinion from a doctor who had never examined the girl or even met her.

If Cigna is a villain, Stan Brock (who died last year) is a hero. His brainchild is RAM (Remote Area Medical), a major non-profit provider of free mobile clinics in the most deprived regions of the USA. We spend quite a bit of time in Wise, Virginia where a huge crowd has descended, sleeping in their cars to ensure an appointment. In some clinics Brock has as many as 1,500 volunteers doing everything from general check ups (diabetes and heart conditions are often discovered) to plastic surgery. Dental seems to be the most popular, and people have left it so long that there is a queue at the “Extraction” department. But in this, our NHS is not much better.

A shot of the space 24 hours later, swept, quiet and empty, leaves us to contemplate what would happen if our NHS simply disappeared.