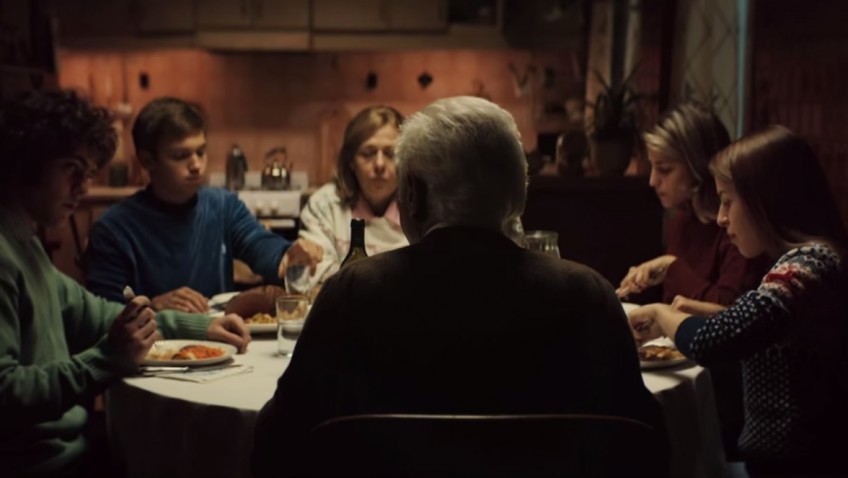 Argentine actor Ricardo Darín is best known for Juan José Campanella’s The Secret in their Eyes and for Director Pablo Trapero’s last two dark and powerful films, White Elephant and Carancho, in which he starred. You will be more relieved than disappointed to learn that Darín has no part to play in The Clan, Trapero’s disturbing, true story of a man who carries on with the former military dictatorships’ political abductions for his own financial gain after the so-called ‘Dirty War’ (1974-1983) is over. This time, Trapero casts Guillermo Francella, who played Darín’s alcoholic judicial assistant in The Secret in their Eyes, as Arquímedes Puccio, a psychopath who turns this historic biopic into a veritable horror story.

As in all of Trapero’s hard-hitting, gritty dramas, there is a socio-political context to The Clan, one that, for non-Argentine audiences at least, is confusingly alluded to in a pre-title prologue. Mixed in with live action footage, archival footage shows Raul Alfonsín, the leader of the democratic government elected in 1983, speaking about the Truth Commission that was to investigate the deaths or ‘disappearances’ of between 13,000-30,000 Argentines between 1974 and1981. Against a backdrop of cacophonous sounds and music assaulting the senses, we are told that ‘after seven years of the most monstrous dictatorship in history, Argentina returns to democracy’. As we shall see during the course of the film, however, expedient practices die slowly.

With Jorge Rafael Videla’s dictatorship over and the final defeat in the Falklands War, Puccio is officially unemployed. Silver haired and cold as steel, he still wanders through the corridors of power like a ghost, maintaining his contacts and searching for information. Puccio was a part of the Fascist state intelligence agency that ‘disappeared’ left wing political opponents and he is still using his ID badge.

Now Puccio has no part in the fledgling democracy that few believe will last. Visiting an indicted former police Commodoro in prison, Puccio is advised to keep a low profile, but the patriarch feels that he is still untouchable. Well versed in the business of abduction and murder, he turns to the affluent families in the San Isidro district of Buenos Aires to fund his unemployment.

If this were ‘just’ the true story of a psychopath kidnapping four of his neighbours and killing two of them, it would be horrific enough. But what interests Trapero – and makes the film all the more chilling – is that Arquímedes makes this a family affair. Succumbing to a combination of force, coercion, flattery, guilt and what must have become a jaded moral compass over the Dirty War years, his wife Epifania (Lili Popovich) and two older sons, Alejandro (Peter Lanazani), called Alex, and Daniel, nicknamed Maguila (Gaston Cocchiarale) are complicit in the kidnappings.

The two daughters are passive accomplices, cuffing their ears to avoid hearing the screams. In one scene, we see the youngest son, Guillermo (Franco Masini), about to board a plane at the airport, pleading with Alex to accompany him.

Although he is not entirely successful, Trapero wants us to identify with Alex, at least enough to witness his father’s personal reign of terror through his eyes. Alex is a rugby champion who plays the room after winning his matches, all smiles and friendly handshakes. Despite his cherubic curls and boyish good looks, Alex uses his popularity to advise his father on potential kidnapping victims. After Alex spends some time chatting with a tall, handsome, rugby teammate Ricardo Manoukian, we see him participating in Ricardo’s abduction.

When, a few days later in the locker room, his teammates tell Alex that Ricardo’s ‘family paid the ransom and they killed him anyway,’ he mumbles, ‘no puede ser’ (it can’t be). Ransom money is one thing, but cold blooded murder was never part of the bargain. Alex, pouting and unable to eat dinner, is furious, but his father blackmails him, ‘if I fall, we all fall.’

The family, or at least Alex, has another business, a front for their real occupation. Alex runs a sportswear shop where he fits an attractive lone customer named Mónica (Stefania Koessl) with a wet-suit and then asks her out for dinner. In a scene reminiscent of the ‘Hurdy Gurdy Man’ scene in Zodiac, Monica and Alex Trapero juxtaposes Monica and Alex having sex in his car with the beating and climactic shooting of a second young victim.

When Alex decides to marry Monica and go clean, he refuses to accompany his father on the next abduction — a friendly entrepreneur who, in an earlier scene, offers Alex a beautiful pair of shoes as a gift, while making the mistake of telling Arquímedes that his business is booming. Alex does not have the strength, however, to break away completely.

By the time Arquímedes kidnaps a business woman of about 60, his scripted ransom calls (which, we later learn, were being taped) reveal that he is meeting resistance. This family is strictly middle-class and cannot come up with the money demanded. As the woman moans to the jarring sound of ‘Just a Gigolo,’ by the 36th day in captivity, a special police unit is ready to pounce.

The script, co-written with Esteban Student and Julian Loyola (who co-wrote Chronicles of an Escape, about an Argentine soccer goalkeeper’s ‘disappearance,’ torture and escape) does not stop with the end of the kidnapping spree. Equally disturbing is the way in which the family suddenly play victim – the mother reassuring Alex that their father will get them out: ‘he’s doing this for us.’ The most stomach churning scene is when Arquímedes tells a judge that he was forced to read the ransom messages by two men he doesn’t know between the ages of 35 and 40. When the judge gives Arquímedes the chance to save his family by claiming responsibility, he will not do it, thereby completing this chilling portrait of pure evil.