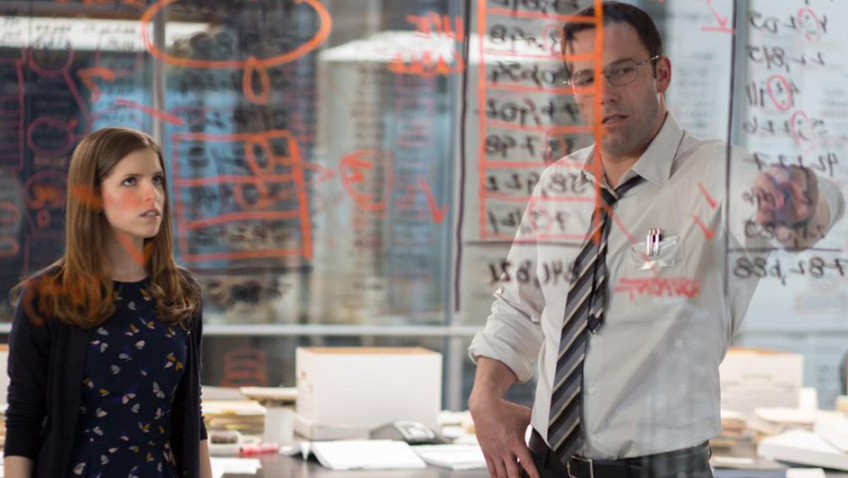 Ben Affleck plays another superhero in this taxing thriller

Director Gavin O’Connor’s (Jane Got a Gun, Warrior, Tumbleweeds) The Accountant, starring Ben Affleck, is really three, or maybe four, movies for the price of one so you’ll get your money’s worth if you go see it.  There are five ‘home invasion’ segments alone, or four if you count the moralistic psychopath terrorising the shady businessman in his car, rather than in his home.  All the main characters get their due, too, so there are more back stories than you can process without a computer.  But there is something so compelling about the premise of an abused autistic boy who grows up to be a mysterious, superrich accountant  operating out of a strip mall, that you wish writer Bill Dubuque (The Judge) had not turned him into a DC Comic superhero to boot. When the accountant, Christian Wolf, is played by Ben Affleck, well known for playing Batman, the invincible superhero label is never far from your mind. Christian, a severely autistic boy (Seth Lee) is screaming over a puzzle in the Harbor Neuroscience Institute in New Hampshire where his mother (Mary Kraft) asks the doctor if, with treatment, her son can lead a normal life. ‘Define normal,’ he replies rhetorically, but the film explores that loaded word because the ‘normal’ people in the film are at a premium.

Meanwhile, as Christian’ s brother watches silently, Justine (Izzy Fenech), the autistic daughter of the Institute’s director, hands a hysterical Christian the missing piece to his puzzle. He immediately calms down and returns to his task.  This brief act establishes a rare rapport in Christian’s life, one that, as we find out, has a lasting impact on Christian’s career. The camera reveals the finished puzzle:  Muhammad Ali, the underdog turned invincible fighter.

Christian’s trajectory turns him, too, into a fighter. Driven to distraction by her sadistic husband and the burden of raising Zac, mum abandons the family and the boys’ peripatetic army Dad believes that the only way to prepare them for life is to teach them to fight back.  Forget the Karate Kid, we are in a hardcore Kill Bill training camp here – that, or The Ivan the Terrible School of Child Rearing.

As now pumped up adult, stern faced Christian is a forensic accountant at ZZZ Accounting in Plainfield, Illinois, just south of Chicago.  Christian’s bog standard ranch house, the sleepy suburban strip mall and the onomatopoetic company name are a front for Christian’s dangerous life style as accountant to the richest criminals in the world.   When he is advised by his invisible partner, ‘the voice,’ to take on a regular client to pay some tax, the farming couple he assists invites him to do some shooting on their farm. If they marvel at his sniper’s aim, nothing prepares them for his display of combat skills when a group of assassins hold the couple hostage. Ben Affleck in The Accountant

Christian has two people after him. The first is ‘The Assassin’ (Jon Bernthal), who some viewers will identify early on, if only for the similarity in their monikers.  He is the one responsible for the additional home invasions that follow.

The other is Director of Financial Crimes at the Treasury, Raymond King (Oscar winning, J.K. Simmons) who, we later learn through a painfully long,  expository conversation with his sidekick, research analyst Marybeth Medina (London born actress Cynthia Addai-Robinson), has unfinished business with the mysterious man he knows as ‘The Accountant’.  Marybeth rejects Ray’s offer of a field job by way of promotion but, for some reason, Ray has to blackmail her into agreeing to find the identity of the Accountant before Ray retires. Here we get Marybeth’s back story. She has a criminal past which is why she lied on her application. Even Snowden couldn’t imagine that the US Treasury has such a lax human resources department.

It doesn’t take the intelligent young analyst long to find the accountant’s identity, although the forensic process is surprisingly interesting.  When Marybeth and Ray travel to Plainville, however, Christian is long gone and his house empty.  They don’t know about his plush mobile home that houses a Jackson Pollock and a stockpile of weapons that would make Charlton Heston weep.

The voice advises Christian to take on a relatively normal assignment, for him: auditing a company called Living Robotics for a public float.  An efficient in-house accountant, Dana Cummings (Anna Kendrick), nearly as nerdy as Christian, has discovered a $61 million hole in the books that looks like embezzling.  Christian dismisses a chirpy Dana and her offer for help but the two will establish a rapport because the filmmakers feel we need something akin to a love interest.

Here, it must be said that a theme in the film is one of righteous vigilantism vs people like the CEO of Living Robotics, Lamar Blackburn (John Lithgow), whose belief in prosthetic limbs for veterans is an unholy crusade.  To say more would be a spoiler.

Just as Christian recreates Dana’s audit trail, Blackburn suddenly terminates his job with a phoney explanation.  Autistic accountants cannot bear to leave anything unfinished, however, and for Christian, this is a puzzle far more challenging – not to mention deadlier – than the one hanging on the wall of the Harbor Institute.

Interrupting this plot are the numerous back-stories, some narrated, some re-enacted and a strange flash back that won’t make sense until the end of the film, if then.  We see Christian and his dad attending his mother’s funeral, without brother Braxton. Since Christian is in uniform, it seems that he followed his dad into the army.  This leaves you wondering when he had the time to build up his extraordinarily complex business empire.  Christian has also spent time ‘inside’ and just when you dread another sub-plot, there’s a long scene with Christian and his prison mentor, Francis Silverberg, a former accountant for the Gambino crime family.

In the film’s big set-piece finale, our maths genius storms Blackburn’s heavily guarded estate, solo, like The Terminator, and the big (and slightly unbelievable) coincidence on which much of the film depends is revealed.  The ending might remind you of Pale Rider with a swanky caravan substituted for the horse riding into the hills, as films about men with guns often have something of the western in them.    But those gunslingers never showed a predilection for balancing books or even keeping track of the body count.