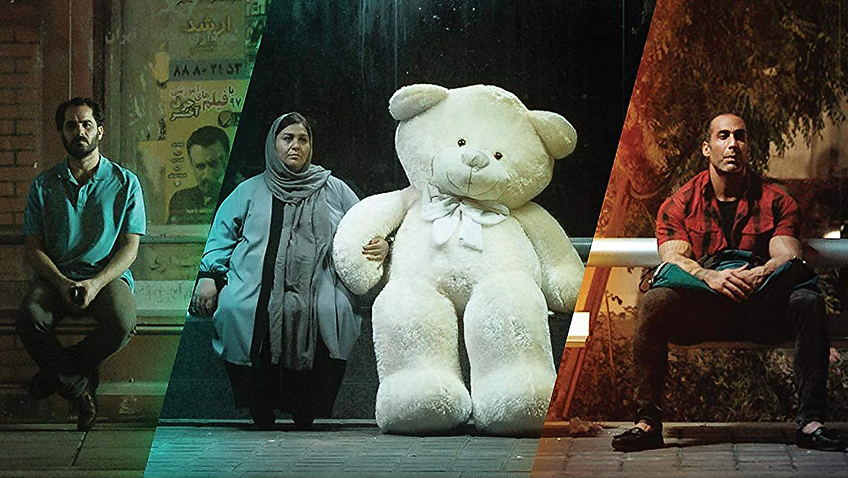 Everything in this bittersweet ironically entitled film about unrequited love will confound your expectations. For starters, you do not expect an Iranian film to have that wistful, deadpan-comic style of Finnish filmmaker Aki Kaurismäki or American filmmaker Jim Jarmusch. Nor do you expect a film made in a country known for imprisoning Nazanin Zaghari-Ratcliffe; the long censorship and house arrest of the great filmmaker Jafar Panahi, stifling religious fundamentalism and corrupt elections to be an apolitical fictional comic-drama focusing on a bodybuilder, a beauty clinic receptionist and a wedding singer.

Iranian born filmmaker Ali Jaberansari has lived in the west since his teenage years which he claims gives him the perspective to show another side to the country’s capital. Tehran: City of Love is a kind of triptych that, with cross cutting and minimally intertwining stories, follows three disenchanted 30-something singles in their search for love.

Hessam Fazli (Amir Hessam Bakhtiari) is a champion bodybuilder who runs a male gym in Tehran and lives alone with his father, who prefers jigsaw puzzles to sport. Hessam, a gentle giant with a small pony-tale, has answered a casting call to appear in a French film starring Louis Garrel (The Dreamers, Redoubtable) who, the casting agent informs him, is France’s most famous actor. When asked, “Are you ok with nudity,” Hessam removes his shirt to display his impressive physique. The Garrel statement becomes a running joke as Hessam searches in vain for a jigsaw puzzle of Garrel or anyone who has heard of the actor.

A client asks Hessam to do him a favour and help his nephew, a young, aspiring body builder named Arshia (Amir Reza Alizadeh) to prepare for an upcoming competition. Arshia is happy with his progress, and he and Hessam begin spending more and more time together, in the gym and outside of the gym. When Hessam brings Arshia home to watch old competition videos they look like a couple, and Hessam decides to put his film career on hold to devote time to Arshira’s career.

Mina Shamsi (Forough Ghajabagli) is an overweight receptionist at a beauty clinic, which offers plastic surgery. Business is booming as Iran’s population seem to have a preoccupation with physical appearance. Even Hessam, when preparing for the film, makes an appointment at the clinic. Mina, who in a hilarious scene, sends back the frozen yoghurt her companions have ordered in favour of ice-cream, might, you think, be an exception. But when her doctor tells Mina she is eating too much and exercising too little, she replies: ‘what about liposuction?’

Despite her weight, Mina has joined the dating game, but subverts the rules with her own bitterly cruel game. She notes the details of attractive men she encounters and phones them using a ridiculously false, sexy voice to leave alluring messages. When the men show up for the rendezvous at her favourite coffee shop, Mina, seated in the back, munching on biscuits, delights in observing their frustration at being stood up.

The only man who informs her upfront that he is not interested is Hessam. If Mina, with her self-destructive self-indulgence, cannot find love, society, religious law, his macho image and his position in the gym make it even more difficult for Hessam to come out of the closet even for the purpose of finding a partner.

It might take Western viewers a minute to figure out that the melancholiest of the three protagonists, Vahid (Mehdi Saki), is a singer at religious funerals in a mosque. Vahid is hiding the fact that he has broken off his engagement from his parents who naturally want to see their son married. When a friend suggests that Vahid try singing for the lucrative wedding market, it is a huge gamble, not only because such musical celebrations are organised clandestinely to evade Iran’s modesty police, but because his singing is painfully plaintive and his body language dull and lethargic.

When Vahid strikes up a conversation with friendly, sympathetic and attractive wedding photographer, Niloufar (Behnaz Jafari), however, he warms to the job, and even follows a tip to dress more stylishly for his performances. Niloufar raises Vahid’s self esteem to such an extent that he embarks on special training to improve his stage persona. But we know that Niloufar, who happens to be a friend of Mina, is a career-minded, independent woman who is making plans to leave Iran.

The script by Jaberansari and Maryam Najafi, gives each segment of the triptych a unique character; every character time to develop and every conversation time to breathe. The scenes between Mina and Reza are particularly delightful with a slight tension as we discover a different side to this troubled woman.

Cinematographer Mohammad Reza Jahanpanah floods the screen with the melting colours and lights of the city at night, and sharply shot, detailed daytime shots of ordinary offices and restaurants. Jaberansari relies on his pitch-perfect actors even more so than on the script to tell their story by registering their fluctuating emotions on their faces and through their body language.