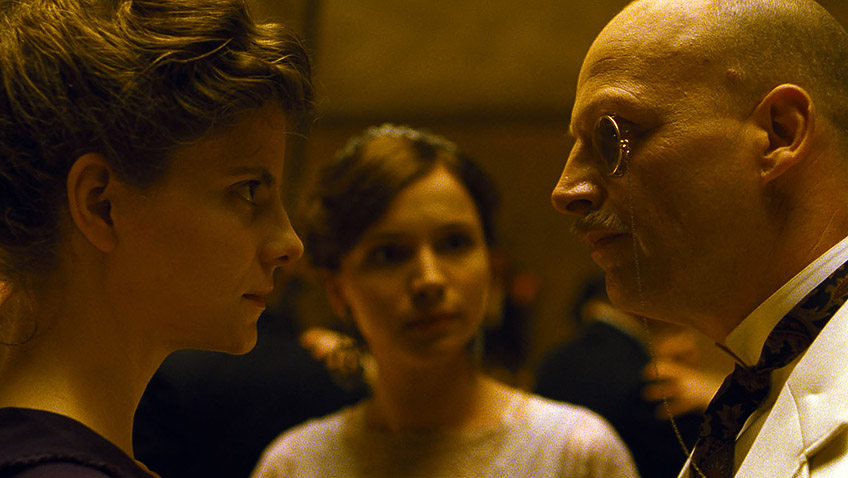 A baffling follow up to the Oscar winning Son of Saul

You have to sympathise with the director/co-writer who wins an Academy Award for his first film, a film that, by merging form and content, is celebrated as much for its technical ingenuity as for its devastating, almost metaphysical story. Hungarian director László Nemes chooses a very different subject for his second film, but invites back his co-writer, Clara Royer; his brilliant cinematographer Mátyás Erdély and sound designer Támas Zányi; editor, Matthieu Taponier, who also has a co-writer credit) and his composer, László Melis. But the decision to apply the template of Son of Saul onto a very different setting and story backfires, leaving us with a visually staggering, but frustratingly muddled spectacle. Your heart ached and your pulse raced for Saul; you don’t feel much of anything with Ms Írisz Leiter. 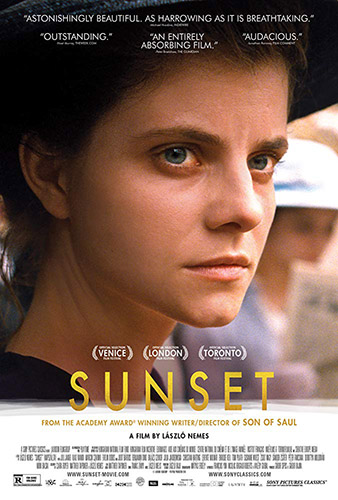 Budapest in 1913 was a vibrant, cosmopolitan city in the Austro-Hungarian Empire, struggling to compete with what was arguably the cultural capital of Europe, Vienna, and home to the Imperial family. Írisz Leiter (Juli Jakab) arrives from the Empire’s third city, Trieste, where she has been trained as a milliner by her foster parents. Her real parents, we are led to believe, died in a fire in the hat emporium that still carries her family’s name.

The enterprise’s new owner, Oszkár Brill (Vlad Ivanov) and his stern, devoted employee Zelma (Evelin Dobos) tell Írisz that the position advertised has been taken. ‘Why did you come here after all that happened? Brill asks her and you long to know what he means by ‘all that happened.’ Írisz simply answers, ‘I have always wanted to work in my parents’ store’, but Brill encourages her to return to Trieste.

Írisz finds a seedy hotel room where she is attacked in the night by a man called Gáspár (Levente Molnár). ‘Come with me’, he orders, grabbing her, while mentioning a son and adding, ‘you don’t even look like him.’ The ruffian is inexplicably violent, throwing her on the floor. The hotel manager intervenes and kicks out the intruder.

The following day Írisz returns to the shop to ask Brill about a son – her brother. Brill dismisses Gáspár as a crazy former Leiter employer, whom he should have locked up. ‘There are those who wish your parents had gone up in the flames,’ Brill tells her, ‘but I liked them and have tried to preserve their name.’ We never learn why people wished her parents ill and we had assumed they did go up in the flames.

Through an adoption agency, Írisz learns her brother’s name is Kálmán and that he worked at Lieter’s. But if Írisz is looking forward to a family reunion, she is going to have to find him. It appears that Kálmán has disappeared after murdering Count Rédey 5 years earlier. But when his loony widow (Julia Jakubowska) shows up to buy a hat, she is still in mourning. Brill claims it has taken years for him to disassociate the company with the name of a murderer. Is this, then, a clue at last?

With the imminent arrival of the Imperial family, Brill admits that they need an extra hand, and Írisz is hired. For all her intentions of showing Brill her talent and skill, she slips off whenever possible to search for her brother.

Írisz is always meeting cagey looking characters, but, though an attractive young single woman in a strange city, she fearlessly follows all leads with no questions asked. A bearded man named Sándor (Marcin Czarnik) tells her to take the tram to the end of the line. There she encounters a gang of criminals masquerading as cab drivers. Kálmán has apparently gone underground to become the leader of this gang. But is Kálmán the charismatic Man in White (Bjorn Freiberg) or perhaps Sándor? Much of the action takes place at night and little is done to give us a clear view of the male characters. With so much and yet nothing clear going on, the film benefits from a second viewing, but at just under 2.5 hours, you might think twice. 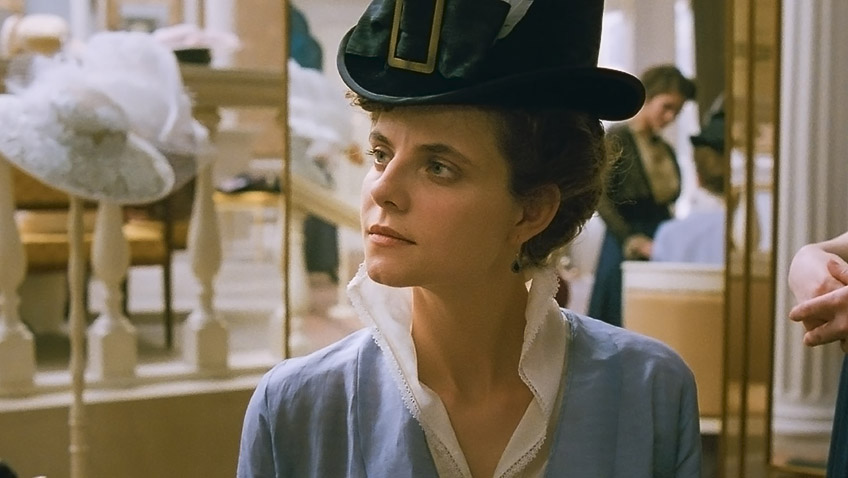 Írisz is nearly raped outside a ‘men only’ club at the end of the tramline, and is saved, apparently by Kálmán, who then inexplicably imprisons her. Resourceful Írisz escapes by rowing across the Danube. When her captor swims after the boat she strikes him with the oar and seems to kill the object of her search, but maybe not.

There are two discernible threads interconnecting with Írisz’s search for her lost brother. One is centred on the Rédey palace where Írisz follows the Countess (and somehow is able to enter and wander around). We also meet Otto von Koenig (Christian Harting) there. He is a sadist who apparently whips the countess, giving some credence to the story that Kálmán was trying to save her – which would have made an intriguing and welcome plot twist if pursued. There is a major set piece in which the robber-cab drivers attack and pillage Countess Rédey’s palace. The next time the criminals attack an establishment, they destroy Leiter’s: bringing us full circle. Are they simple criminals, anarchists, or do they have a legitimate cause?

The second interconnecting thread is equally baffling, but even more sordid and disturbing. The Imperial visit to Leiter’s is a commercial success, but Írisz discovers that the girl chosen to accompany the Imperial family back to Vienna has in fact been sold by Brill to the Prince (Tom Pilath) and the Princess (Susanne Wuest). Zelma is the chosen one, but Írisz, for some reason, goes to Vienna in Zelma’s place.

If something about the sadistically-erotic scene in Vienna reminds you of Stanley Kubrick’s final film, Eyes Wide Shut, it might not be such an off-the-wall thought. Kubrick based his film loosely on Traumnovelle (Dream Story)

by Arthur Schnitzler, a Viennese author whose writings on sexuality and anti-Semitism attracted the interest of Sigmund Freud. Though written in 1926, Schnitzler’s novella is set in pre-WWI Vienna, exactly like Sunset

. The story involves the transformation of a thirty-something doctor whose wife has admitted have sexual fantasies.

Could it be that Írisz’s ordeal is a fantasy, too, a kind of adult, nightmare version of the Wizard of Oz? This might explain Írisz’s ethereal wanderings from one place and one encounter to another , but the film provides no evidence (such as a falling asleep or an awakening) of a dream. The bizarre coda at the end – a clear reference to the horrors of World War I – makes the dream theory even more improbable.

With some exceptions, the intentionally baffling narrative precludes suspense and emotional involvement as we never know what is happening, or who is a villain and who is not. The disorientation is not helped by Nemes’ decision to shoot Sunset

in the same close up and medium shots as Son of Saul with backgrounds out of focus and unidentified sounds and shapes floating in and out of the picture frame. The effect is claustrophobic, but is that the effect this film needs?

We can admire the meticulous production and costume design, and particularly the back of Ms Jakab’s neck which is a recurrent image in the film. But, frustratingly, we are unable to explore her surroundings, which, unlike the concentration camp of Son of Saul, cannot be left to the imagination. They are as wide-open and unfamiliar as is the historic moment in which Nemes sets his drama.