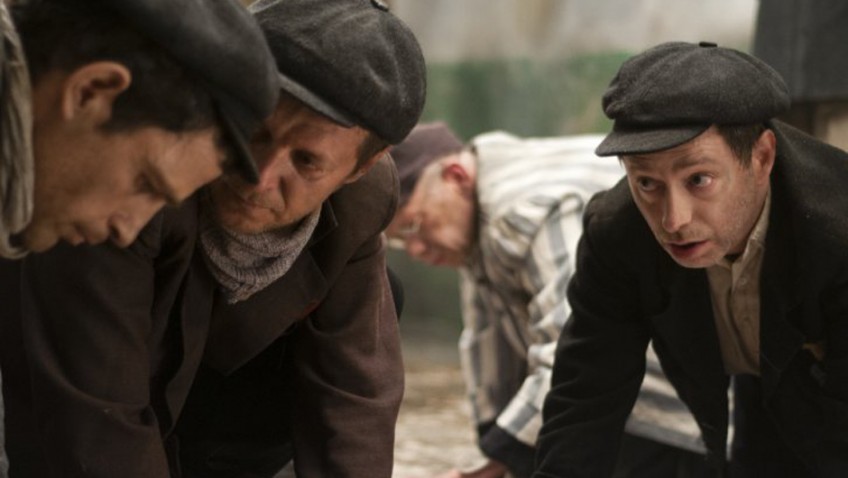 , the film that won the Grand Prix at Cannes and the Golden Glove and Academy Award for the Best Foreign Language film, among many other accolades, is remarkable in several respects.  It is 38-year-old Hungarian filmmaker László Nemes’ first feature film as Director and Co-writer (with Clara Royer). It is also the first film role for its star, Géza Röhrig, a NYC-based Hungarian Hasidic Jew, poet and one-time TV actor who is in every frame.  Indeed, we see, hear and experience what his does: no more, but, significantly, no less.  In technique, style and approach, it is a ground-breaking film set in Auschwitz-Birkenau that boldly challenges the great documentary film maker Claude Lanzmann’s (Shoah) statement that the reality of Auschwitz could only be constructed in our minds, not on a soundstage.  Though meticulously researched from primary sources, Son of Saul

– which was shot on the outskirts of Budapest – is the opposite of a documentary. It is, says Nemes, ‘a film about feeling not facts.’

The film covers two days in the life of Saul Ausländer (Geza Rohrig), a Hungarian Jew.  In 1944 Saul is a Sonderkommando at Auschwitz in Poland, a special category of prisoner who, according to the film’s only caption, are separated out from the rest of the camp to work for a term before being executed.  This is hardly a life at all, but if this non-preachy film has a message, it is that even an ordinary man reduced to an animal in a slaughterhouse can find meaning and purpose to his existence.

A Sonderkommando’s primary job is to scrub the gas chambers and remove the corpses.  With the screams of the naked crowds and their futile banging on the thick metal doors ringing in his ears, Saul attends to his other task, which is to rifle through the belongings of those being gassed in the showers, separating out the valuables for the Nazi war chest.

Some Sonderkommandos are pocketing gold to bribe the guards for they are planning a rebellion.  Another group has a more long-term, but less risky plan to smuggle out photographs of the atrocities to alert the world to the slaughter.  Saul is included in the plans. But one day, he sees a young boy in the chamber who is still breathing, only to be murdered by a Nazi who is called over to observe the specimen.  Saul sees in the handsome young man something that causes him to crack – or aspire to sainthood. 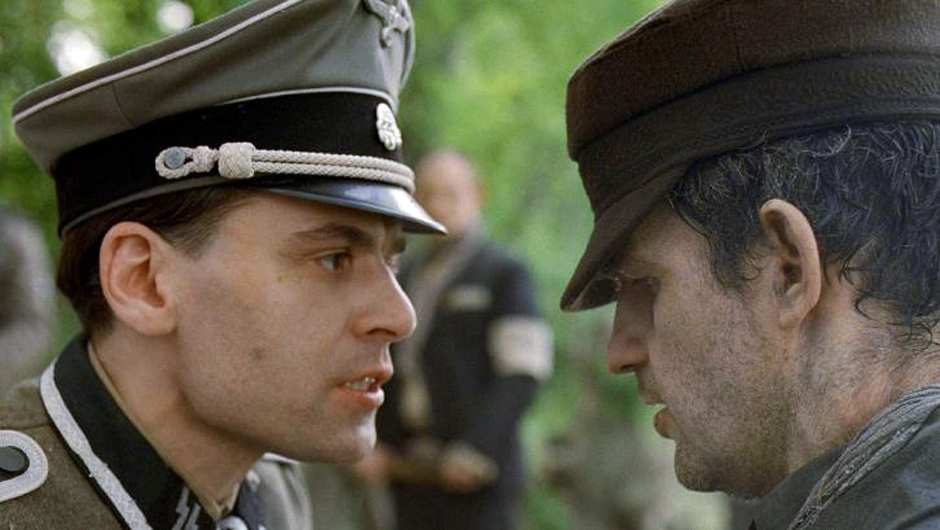 It is characteristic of Nemes’ refusal to explain or spell things out that while Saul takes the boy for his son, another prisoner confronts Saul with the fact that he does not have a son.  When the boy is sent for an autopsy Saul tries to persuade the prison doctor, Miklos (Sándor Zsótér) not to do so. Miklos, who is, like Saul, a Jewish prisoner, tells Saul that his life will be in danger unless Saul finds him a substitute boy.  He agrees to delay the autopsy to give Saul time to say Kaddish with the corpse. Instead of finding a substitute boy, however, Saul sets out to find a rabbi.

As Saul embarks on an almost absurd quest to give the boy a dignified Jewish burial in the middle of Auschwitz, he goes from being a battered soul marked for death to a man who determined to do something sacred.

When none of the real rabbis pan out, in desperation Saul finds Braun (Todd Charmont) in a trainload of new arrivals being shot on the spot. The bewildered man allows Saul to believe he is a rabbi and is saved when Saul risks his own life to disguise Braun as a Sonderkommando.  But in the turmoil of the mass murders Saul loses a package of gunpowder with which he had been entrusted for the imminent rebellion. By putting Saul’s burial of the dead above the possible, but dubious survival of the living, Nemes creates a fascinating moral conundrum. 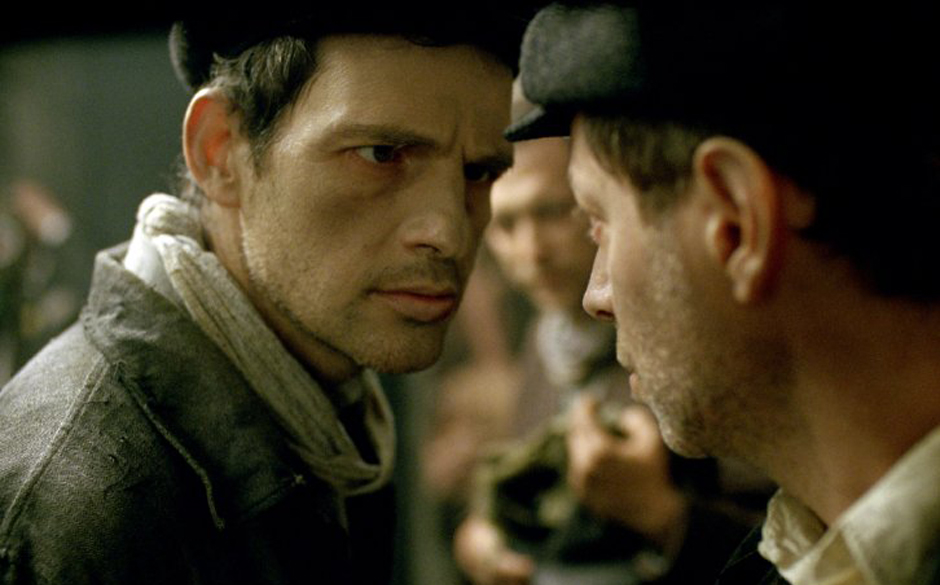 The only time you might feel the hand of the director is when we are taken on a kind of house of horrors tour, from the gas chambers, to the autopsy rooms, to the lake where the ashes from the crematoria are dumped, and to the alternative chambers – the pits into which surplus arrivals are rounded-up, stripped, shot and thrown like litter.  Saul’s job, the various errands he performs for the rebellion and his search for a rabbi provide a convincing excuse for him to travel around the camp so that this ‘tour’ is in an integral part of the plot. Nonetheless, some viewers might find it feels somewhat schematic

This impression is never strong, as we are inevitably immersed in the hell-on-earth that is Saul’s life and in his perilous and nail biting mission. Nemes designed his film so that every aspect of it contributes to our immersive, disorientating and claustrophobic experience.  All the actors speak the clipped dialogue in their own languages (a cacophony of alienation and confusion) and there is no back-story to any of the characters. We are left to figure out for ourselves the relationships between the various prisoners who are placed in a kind of hierarchy in the camp.

Nemes and fellow Hungarian cinematographer Mátyás Erdély (James White, Miss Bala) adhere to strict technical rules to complement and reinforce the content.  By using a 40 mm lens and Academy ratio (the original square film ratio used before 1953) instead of widescreen, and restricting almost all the shots to close-ups or medium shots leaving the background out of focus, they create a claustrophobic, frantic and perilous atmosphere.  Along with Saul, we are always straining for a clearer view and more information than we are allowed. The striking sound design by Tamás Zányi is a perfect acoustical equivalent to the images.

In addition to relying on books and historian-consultants for his story and script, Nemes used The Scrolls of Auschwitz, a collection of testimonies by members of the Sonderkommando to ensure not only authenticity, but respect.  The film is dedicated to the Sonderkommando who have received, with Son of Saul

, a burial worthy of their memory.