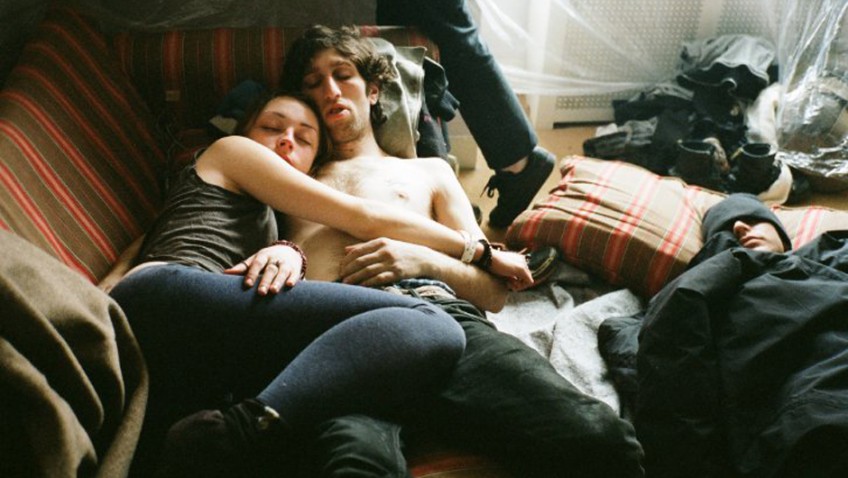 Drug addicts are usually self-absorbed, boring people.   You know that they are never thinking beyond their next fix and will have no qualms about saying or doing anything to obtain it. A love story involving two junkies might, therefore, seem oxymoronic, but mutual dependency takes on a new meaning when the lovers’ addiction to heroin competes with, or is the basis of, their adherence to one another.  Movies about junkies in love do exist, however, and while they may be painful to watch, they are anything but boring. Some of the best include, The Panic in Needle Park, Sid and Nancy, Requiem for a Dream, Candy (Abbie Cornish and Heath Ledger) and now, Josh and Benny Safdie’s Heaven Knows What

If Heaven Knows What

covers familiar territory, (quite literally sharing locations with Al Pacino’s 1971 break-through film, The Panic in Needle Park) it does so in a completely new way. That is because the script is based on Mad Love in New York City, a memoir written by drug addict Arielle Holmes, at the request of the directors. It was adapted for the screen by Josh Safdie and the film’s co-writer/co-editor Ronald Bronstein who has a small role in the film. The Safdies cast Holmes as Harley, the lead in their film adaptation of her memoir.

Several of the characters in Holmes’ supporting cast are street people themselves. The main exception is the character of her so-called boyfriend, Ilya, played by Caleb Landry-Jones (God’s Pocket, Low Down). The Brooklyn rapper and record-label owner known as Necro has a small role and, with his first studio album entitled I Need Drugs, he fits right in.

Harley (Holmes) is a 19-year-old homeless junky so passionately in love with the charismatic, but sadistic and unfeeling Ilya (Landry-Jones) that when he tells her to prove her love by slitting her wrists, she calls his bluff.   When she returns the streets after a stint at Belleville psychiatric hospital (where Holmes recovered after slitting her wrists), a fellow-junkie, Skully (Ron Bronstein), tries to persuade Harley to leave Ilya.  But it’s far too late. Harley claims that her life has no meaning without Ilya.

When she hooks up with drug-dealer and addict Mike (Buddy Duress), we realise just how meaningless that life is.  Mike is hardly the type of boy to bring home to mother, but at least he seems to care about Harley and invites her to join him, for a part of the rent, a run-down, cramped apartment where he seeks shelter in a shared occupancy. Their life together is not dissimilar to the life of a python in the jungle that spends its existence plotting a kill and then sleeping it off until he awakens desperate to feed again. We watch the resourceful pair plunder the postman’s trolley looking for usable credit and store cards or, a rarity, cash.  If the post doesn’t deliver, they steal energy drinks from convenience stores and then resell them to drink stands. Harley also begs on the streets, a territorial affair that is not without risk.

Eventually Harley gets back together with Ilya and the two decide to take a bus to Miami to start anew.   Whether autobiographical or not, the Miami bus ride episode is reminiscent of Midnight Cowboy, another film about two, co-dependent down-and-out hustlers in NYC who end up escaping to Miami, or trying to.  Gritty and shocking as it was at the time, Midnight Cowboy features back stories, often shown in flashback form, of their dysfunctional family lives. These back stories are meant to explain the men’s inevitable trajectories and create viewer empathy. 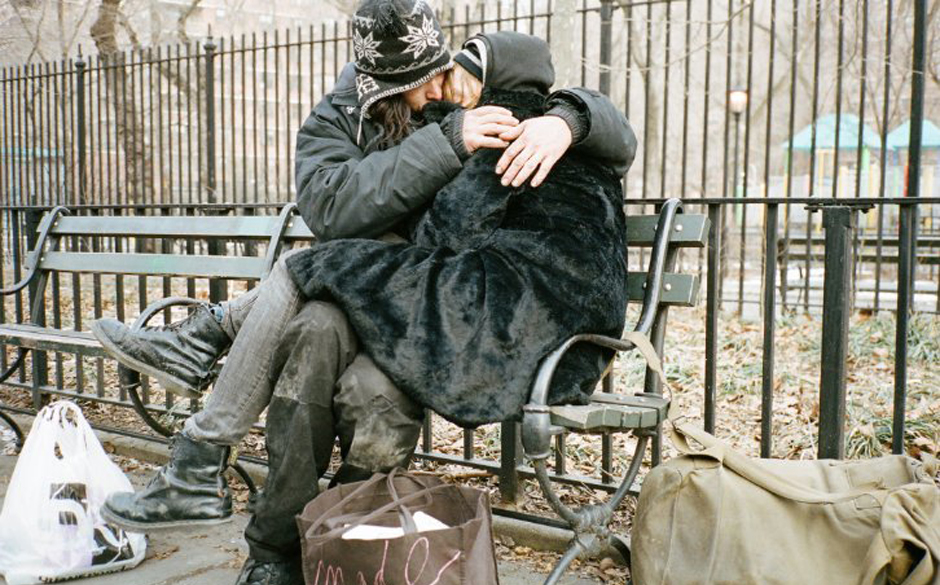 Holmes and the Safdies offer no facile explanations and are not interested in them. Nor are they interested in presenting this subculture of the upper West Side as a social phenomenon.  Instead of a message, or a romantic view of the drug world, we get an ugly and uncompromising survival guide.

The opening shot is of Harley and Ilya kissing passionately in an open space, but the camera is so close to the faces that we do not see the background.  If this tenderness between Harley and Ilya is a rarity in the film, the narrow focus is not.  The close ups plunge us into the world of these two junkies which the camera helps situate within the huge city of Manhattan.  On the one hand, the close-ups suggest that their lives are as narrow as can be imagined: these young people are incapable of taking advantage of the metropolis, rich in culture and employment.  At other times Sean Price Williams’ cinematography uses wide, panning shoots, placing the camera above the characters in a lyrical, spacious, and imposing atmosphere that suggests inconsequential these two lives are. Price Williams also isolated the obnoxious, pretentious writer of 2014’s Listen Up, Philip in another, but no less real, New York City. The music, which includes Isao Tomita’s arrangements of Claude Debussy played on a Moog synthesizer, is flexible enough to suit both perspectives.

The Safdies were taking a risk in putting all their faith in Holmes, but not even the most expensive and extensive casting call could have produced an actress as perfectly cast as Arielle Holmes. Her harsh New Jersey accent contrasts with her thin, delicate, bony features, pale skin and brown eyes – eyes that are always darting about like those of an animal in the wild that is prey and a beast of prey.

Like the blue-eyed Dean DeHaan, four years his senior, Caleb Landry Jones is a scene stealer with a fascinating, charismatic sex appeal that even his deranged wild man appearance here does not mask.  You want Harley to leave him, but are not unhappy when he returns into the film.  Imagine his near-namesake, Illya Kuryakin in The Man from U.N.C.L.E..  As played by David McCallum, you knew he was cool and that he made each scene more interesting without being able to pinpoint why.  The film is dedicated to Ilya.