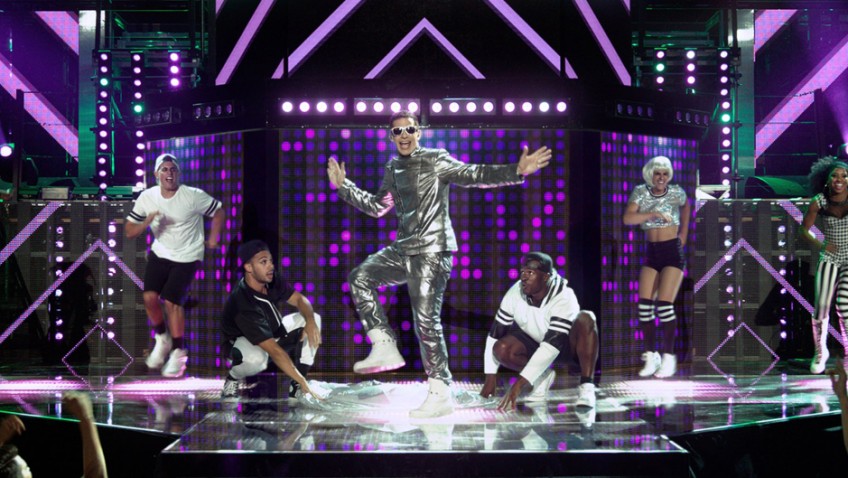 The title is, of course, a dead giveaway. This is a spoof on boy band and Justin Bieber ‘selfie’ movies and documentaries; more Justin Bieber: Never say Never than Tom Cruise’s Rock of Ages. The talent behind this parody include comedians/writers/ and co-producers Andy Samberg, Akiva Schaffer and Jorma Taccone who also star as the boy-band The Style Boyz. Directed by Schaffer and Taccone, the film has some very funny moments; arguably as many cameos as Zoolander 2; and it certainly gets the parody down pat. But it’s a high concept, one joke film that sometimes feel stretched out at just 86 minutes. 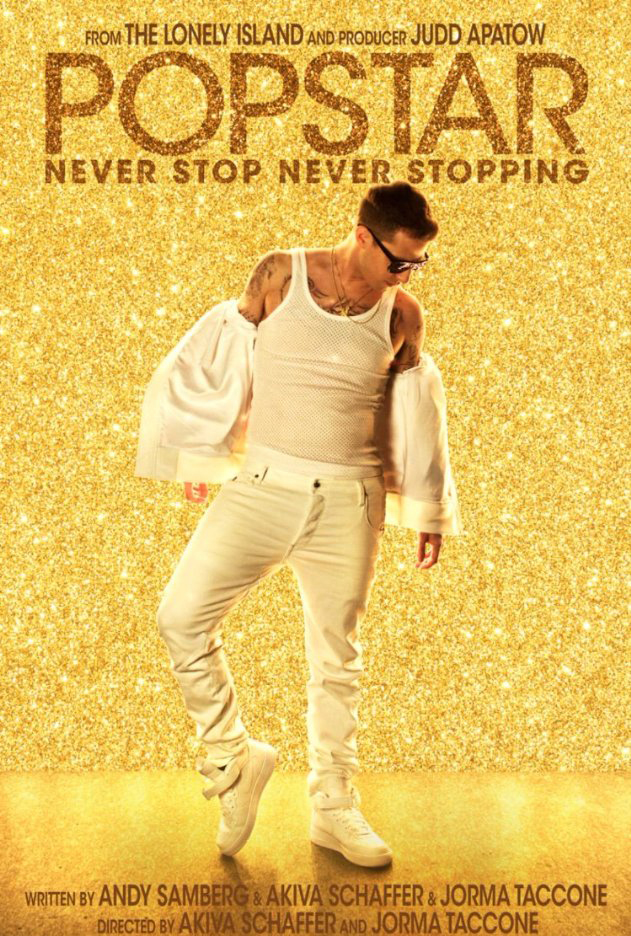 Childhood friends Conner or ‘Kid Conner’ (Samberg) the lead singer; Lawrence, or ‘Kid Brain’ (Schaffer), the songwriter, and Owen (Taccone) or ‘Kid Contact’ were a boy band sensation and their LP Karate Boy earned them a huge fan base. But we all know that very few bands – apart from the Rolling Stones – stay together and when the three took their physic fight to the stage, the game was over.

Lawrence moved to a ranch in Colorado and went into farming (marijuana in fact) while Conner went solo with the low-key Owen as his DJ.

He employs 32 people on his payroll, including an ‘ab’ trainer, a weed roller, a turtle keeper (he has a pet turtle) and a perspective manipulator (a short person who stands next to Conner so he always appears tall. Naturally, he also has a manager, Harry (Tim Meadows), a publicist, Paula (Sarah Silverman); a personal chef (the singer Justin Timberlake, whose singing while he chops is quickly silenced); and a movie-star girlfriend, an airhead named Ashley Wednesday (the talented Imogen Poots)

There are high hopes for Conner’s debut solo album, CONNquest. After all, we learn from a dead pan narration, Conner wrote all the songs himself ‘and used over 100 producers for 11 tracks’ – a spot on reference to many overproduced albums. In what might just be a world advertising first, a household appliance manufacturer signs on to be Conner’s corporate tour partner with a unique idea. Their marketing head, ‘Actually, it’s De-bór-ah’, Deborah (Maya Rudolph) agrees to have the tracks downloaded into their appliances so that when you open your fridge door, you have instant CONNquest.

But all the Katy Perry-like on stage wardrobe changes cannot mask a dud. Commenting on the album, Ringo Starr fails to understand the point of the subversive, crusading song ‘Equal Rights’ (with the refrain, ‘I’m Not Gay’). ‘He’s writing a song about gay marriage. But it’s allowed!’ Star exclaims.

When sales fail to materialise Paula thinks some twittering about Conner’s love life might help keep the album in the public eye. His very public proposal to Ashley Wednesday complete with Seal (playing himself) singing over a row of howling wolves (an allusion to Ashley’s fantasy life) turns into a disaster. Later we learn that Ashley and the seriously injured Seal are an item.

Harry steps in to save the tour. Over Conner’s objections, he brings in Hunter the Hungry (Chris Redd) as a leading act to boost sales, and it works. But it’s clear the success if down to Hunter, not Conner. When Hunter’s popularity overtakes Conner’s (Conner sacks Harry when he learns that Harry now represents Hunter) Connor’s wounded pride causes him to self-destruct.

As Conner pines away at home with only his ego and turtle for company, the long-suffering Owen hatches a plan to reunite Conner and the estranged Lawrence. Could a come-back be the answer?

The filmmakers make clever use of their cameos. They ring out cliché endorsements, or comment on the impact of the music as do the talking heads in a documentary. Celebrities from the music world including Mariah Carey, Arcade Fire, Snoop Dog, Simon Cowell and 50 Cent, Akon, and Adam Levine (singing the all too ironic ‘I’m so Humble’ on the soundtrack) all appear playing themselves and/or singing on the soundtrack. The big finale is sung by golden voiced Michael Bolton with the Style.

While the satire is sharp, it’s quite a challenge to parody a film genre that is already a parody in its own right. As the desperation and emptiness of Conner’s life heads for that downward spiral, it’s hard to find anything to laugh about.