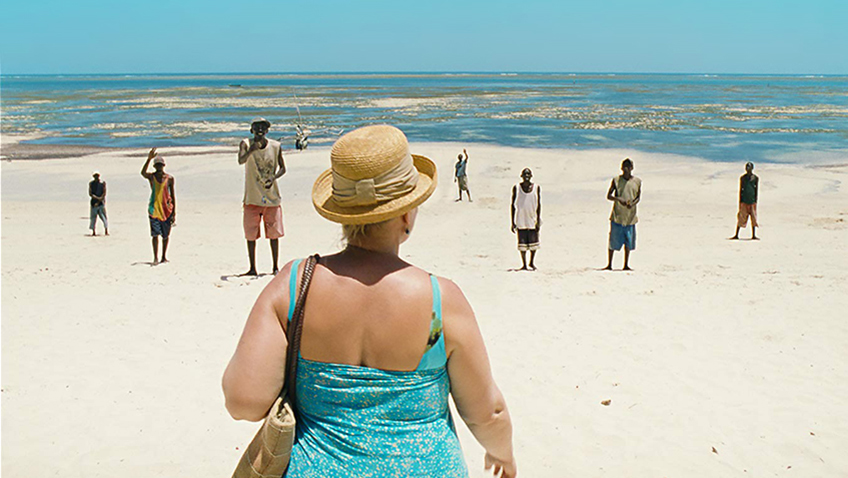 From Austrian Director Ulrich Seidl’s debut in 2001, Dog Days, it was obvious that the title of his latest film, Paradise: Love

, about a middle-aged Austrian sex-tourist in Kenya, would be as ironic as it would be thought-provoking. It was also obvious, that, shot in his trademark disquieting, naturalistic style by the great American cinematographer Edward Lachman (I’m not There, Erin Brockovich, Far From Heaven) with uninhibited full frontal nudity and disturbing sexual encounters, the film would be divisive and controversial. Unlike Dog Days, however, and even more than Import/Export, Paradise: Love

, is infused with a depth and compassion that balances precariously against the unpleasant subject matter.

‘Sugar Mamas’ is the name given to middle-aged European women who go on holiday in Africa to pick up boys whose main livelihood is this form of prostitution. One such woman is Teresa (Margarete Tiesel), an obese 50-year-old Austrian care worker. Our feelings toward Teresa change throughout the film, but when we first meet her in suburban Austria, our hearts go out to her. She supervises a group of mentally ill adults on a day trip, returning exhausted to her immaculate flat where her lazy, fat, teenager daughter is sprawled on the bed, shoes on, tied to her mobile phone.

Teresa still has a pretty, young looking face, but her low self-esteem is manifested in her obsessive compulsive cleaning and over-eating. When she drops off her daughter at a relative’s (where they both eat cake with tea) we hope she is going off to a holiday where she’ll lose weight, meet some interesting people and have fun. Instead, we watch her partaking in the Sugar Mama’s ritual humiliation of paying disgusted young men for mechanical sex and coughing up more money for their alleged sick relatives.

Although French filmmaker Laurent Cantet’s 2005 film Heading South also dealt with sex-tourism, Cantet was less interested in the sex itself than in the political upheaval in the former French protectorate of Haiti that created the conditions for sex tourism. His female tourist/protagonist is a very attractive middle-aged university professor and her sole liaison is portrayed in a romantic light. To say that Seidl has stripped sex tourism of any romance, fun or dignity is the understatement of the year.

For Seidl, the socioeconomic and political context is expressed visually and it is all about a sleazy kind of free trade. In a powerful image, dozens of young African men stand in formation on the beach, back to the sea, facing the rows of beach chairs, trinkets in hand. Like an army of predators, they wait to pounce on any female who ventures beyond the patrolled security line towards the beautiful rock pools and the sea.