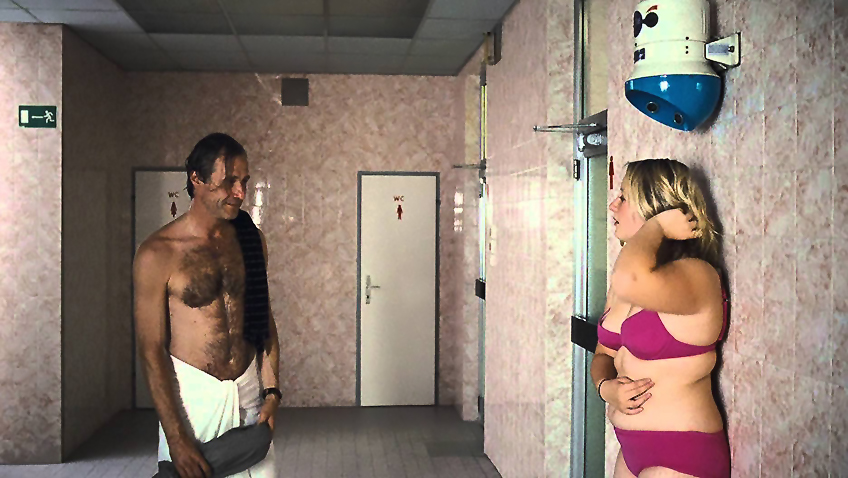 – ironic titles for the audience, if not for the deluded Austrian women who feature in each film. Originally conceived as one film about the summer holidays of Teresa, a middle-aged, obese, divorcee who becomes a sex tourist in Kenya; her overweight sister Anna Maria, a Catholic religious fanatic living with an estranged Muslim husband, and Melanie, Teresa’s thirteen-year-old daughter who is sent off to a diet camp, it is with Paradise: Hope

, that the subtle connections and themes of this thought-provoking, but controversial trilogy emerge.

In Paradise: Love, Teresa drops off her overweight, lazy, unmotivated daughter Melanie (Melanie Lenz) at Anna Maria’s (Sister) where, after tea and the cake none of them need, Teresa flies to Kenya for what turns out to be two weeks of humiliating sex for money with young, native men. Anna Maria, who is looking forward to an empty house for a holiday of self-flagellation, prayer, missionary work and communing with her lover, Christ, drives Melanie to a Weight-Loss Camp.

Despite a beautiful rural setting, the camp resembles a low security prison in its appearance and in the regimented structure of the schedule. Seidl regulars Michael Thomas and Viviane Bartsch play a personal trainer and a nutritionist respectively. When the girls raid the kitchen, Michael marches them out before all the camp’s hard work is undone in one binge. We begin to sense how futile the two weeks will be for these teenagers, so clearly lacking in positive role models, discipline or motivation.

We begin to reflect on Anna Maria’s spotless home, ambiguous relationship with Jesus and overly zealous missionary work, and Teresa, who despite being in Kenya, sees nothing of the country but the inside of a hotel room and the huts of the native boys who despite her. Could it be this same low self-esteem that drives these women to subject themselves to such humiliation, seeking a sublimated form of love where they are least likely to find it?

Melanie, consciously or not, sets out to test her appeal to men when she finds herself attracted to the Camp’s director and doctor (Joseph Lorenz). Dr Artz is a tall, fit and ruggedly handsome, but notably cold and creepy middle-aged man. At first he humours Melanie when her frequent visits to his office with fictitious symptoms hint at a sexual attraction. Her visits to his office are reminiscent of her mother’s visits to her Kenyan lover’s hut.

Instead of examining her, he removes his shirt and allows her to listen to his heart. This play acting soon develops into a story of forbidden love, with an element of perversity in a disturbing scene towards the end. Artz is called to rescue Melanie from a nightclub where she has passed out from alcohol after an attempted rape by a local boy. On the way home, he lays her out on the forest floor and, without touching her, sniffs around her body. Again, we think of a scene in which Teresa’s corpulent, naked body lies in state across her lover’s bed as he sits in a chair across the room.

As you watch Paradise: Hope

, many recurring images and themes associated with sexual awakening and proxies, as well as with well-being and health – Teresa is a carer for Down syndrome people, Anna Maria is a radiologist, her husband is a paraplegic, Joseph is a Doctor and Melanie is a ‘patient’ – emerge. The unifying theme, the uncanny relationship between the mental, spiritual and physical, has seldom been dramatised so palpably.

We watch Melanie struggle with her love for a father figure and some kind of approval in the face of a lifetime of criticism and rejection, and cannot but reflect on the experiences of her mother in Kenya (their brief telephone call is particularly tragic in this regard) and of her Aunt in the Viennese suburbs. All three women find ways to sublimate for what they cannot express or attain and the sublimation locks them further into a closed, downward spiral. This summer might be a wake-up call and an opportunity for Melanie, the youngest, to escape her destiny. But for all the women, Paradise – the promise of eternal happiness and calm – has never seemed more elusive.