Home / LIFESTYLE / REVIEWS > / FILM REVIEWS / Disturbing. But there is no denying the power of Seidl’s disquieting, naturalistic style 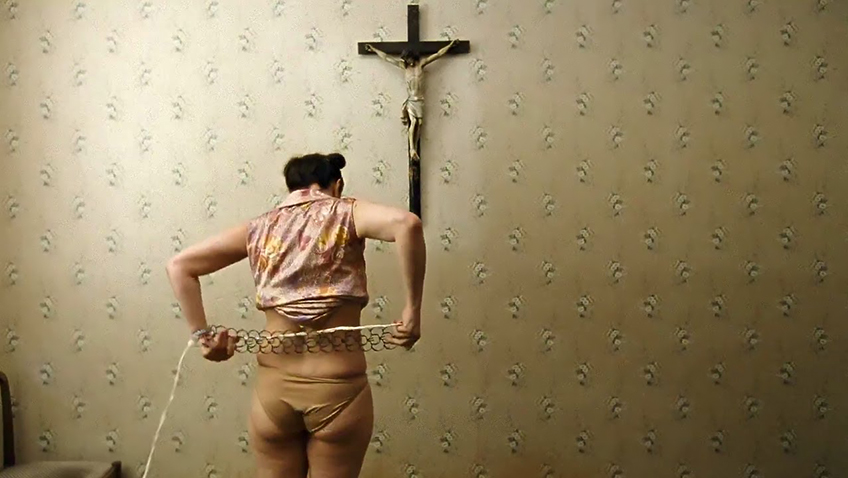 Disturbing. But there is no denying the power of Seidl’s disquieting, naturalistic style

is the second in Austrian Writer/Director Ulrich Seidl’s trilogy about lonely, overweight, middle-aged women whose sublimation of their frustrations and anxieties manifests itself in unhealthy ways. Maria Hofstätter plays Anna Maria, the sister of the woman in Paradise: Love who became a sex-tourist on her Kenyan holiday, turning her quest for love and companionship into undignified, mechanical sex with unscrupulous young native men. As the title suggests, Anna Maria’s crutch in Paradise: Faith

is her relationship with Jesus, which, despite its rocky patches, turns out to be a lot easier than an abusive marriage with a wheel-chair bound Muslim man (Nabil Saleh).

Anna Maria has, like her sister, who cares for mentally ill adults, a responsible, caring job as a radiologist in a hospital. She tells a colleague that she is staying home for her holiday, and, for the remainder of the film, we experience her busy schedule of scrubbing her floors; solitary and group prayer; missionary work and caring for an estranged, paraplegic husband who suddenly reappears in their home after an unexplained absence, hoping to resume sexual relations.

As part of her missionary work, which apparently is common in Austria, she drags around a statue of the Virgin Mary to the homes of lapsed Catholics, the results injecting some welcome black humour into the grim proceedings. In one visit, she argues with a respectable couple that they are living in sin because they are not married. Her warnings seem misplaced as the couple are in their sixties and he is a widower and she is divorced from an abusive husband. Later Anna Maria battles with an Eastern European sex worker intent on drinking herself into a stupor. Here, the woman clearly needs help, but Anna Maria’s approach is too heavy-handed to be effective.

Hofstätter, who has worked with Seidl since his controversial film Dog Days in 2001, and not only knows his style but obviously trusts the director, is superb as Anna Maria, and holds the film with her unflinching performance. All of the supporting performances are excellent, too, with special mention for Saleh, a non-professional actor who is a 50-something Muslim but not a paraplegic.

While the focus is on the women, and what the actresses are put through, is disturbing, there is no denying the power of Seidl’s disquieting, naturalistic style. It might take these voyeuristic films that expose vulnerable women’s self-destructive and humiliating behaviour to appreciate the close, but mysterious, relationship between the mind and the body in all of us.