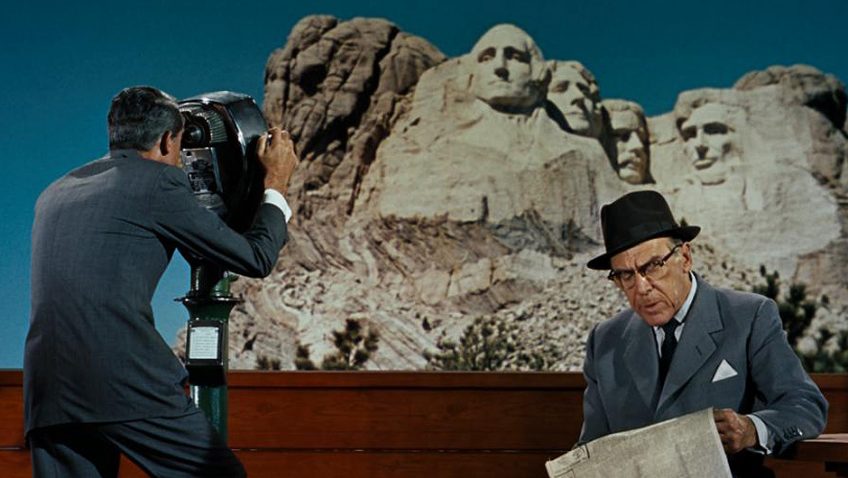 No – the films in the BFI’s themed season, ‘Who Can You Trust,’ are not about fake news; although thrillers like All the President’s Men and the Manchurian Candidate are political. You might even include Alfred Hitchcock’s North by Northwest

in that category if you consider that Cary Grant’s and Eva Marie Saint’s nail-biting climb over the Presidents’ faces at Mt Rushmore to be un-American. Certainly the authorities feared that when they denied Alfred Hitchcock permission to film in situ, without crippling guarantees. Permission was firmly denied to film in the interior of Oscar Niemeyer’s 1952 United Nations Building, but Production Designer Robert Boyle is so talented, you’d never know it. Here Grant’s Roger O. Thornhill is accused of murdering a diplomat.

That – and a lot more – happens in North by Northwest

. The eponymous navigational direction does not actually exist, but the title is easily found on the schedule at the BFI Southbank.

When the in-demand scriptwriter Ernest Lehman was introduced to Hitchcock by Hitch’s favourite composer, Bernard Herrmann, it was not to write North by Northwest

, but another project which Lehman ultimately gave up on. Such was the strength of the friendship that blossomed between Hitch and Lehman, however that they embarked on a completely new film, only Lehman hadn’t a clue what that would be.

‘I always wanted to do a chase scene across the face of Mt Rushmore,’ Hitch just happened to mention one day and Lehman became more interested. While figuring out who would be chasing whom and why, Hitch dropped another hint: ‘I always wanted to do a scene where our hero is standing all alone in a wide open space and there’s nobody around….No place to run.’ After the two men acted out the logistics of the famous crop-duster scene in Hitch’s living room, Lehman was hooked.

Cary Grant and Eva Marie Saint in North by Northwest

He was, however, concerned at the studio’s reaction when it emerged that they had abandoned the green-lit project for another. ‘What will we tell Metro?’ Lehman asked Hitch, referring to financiers Metro Goldwyn Mayer (MGM). ‘We won’t tell them,’ Hitch replied straight faced. And the rest is history.

Three times divorced, confident, debonair and successful advertising executive Roger O. Thornhill (Cary Grant) is kidnapped from a business meeting at the Plaza Hotel by Phillip Vandamm (James Mason) in a case of mistaken identity. Nothing Thornhill says will convince Vandamm that he is not the elusive US spy George Kaplan. One of the most entertaining chase movies of the last century begins when Thornhill starts to take the situation seriously after being plied with alcohol and sent driving down a winding mountain road. Ironically saved by the local police, Thornhill’s attempt to clear his name and solve the Kaplan mystery leads him to the UN where he becomes the only suspect in the assassination of a diplomat. Soon he has both Vandamm’s henchmen and the police after him. In a train, where he is being pursued, he meets the seductively cheeky blond, Eve Kendall (Eva Marie Saint). Eve is the answer to his prayers when she offers to shelter Thornhill in her private compartment. But can he trust her?

Yes, this is another of Hitchcock’s ‘wrong man’ films, but it is, without a doubt, the most fun to watch, and arguably the best. If his motive in making North by Northwest

was to improve upon ‘the wrong man’ film, Sabateur, he still needed the ‘innocent man accused’ theme to enable us to identify with the protagonist. Hitchcock knew what so many of today’s writers have chosen to ignore: if audiences did not have a stake in the story; that is, someone with whom to identify, even the master of suspense could not deliver a successful film.

You might find it difficult to imagine Cary Grant’s Roger O. Thornhill in real danger, but North by Northwest

features some of the director’s best set pieces, period architecture and location shooting, not to mention a strong female role.

Fun, witty and romantic, and filmed in sharp colours across dazzling locations on VistaVision widescreen, North by Northwest

is not only the pinnacle of Hitchcock’s big 1950’s movies, but the last. Within a year of its release in 1959, Hitchcock marked the new decade with the film that would change cinema history and audiences forever: Psycho.

For further information on the films in the BFI Thriller season go to: www.bfi.org.uk/thriller. To book tickets online www.bfi.org.uk/tickets-other-purchases-bfi-southbank or call: 020 7928 3232