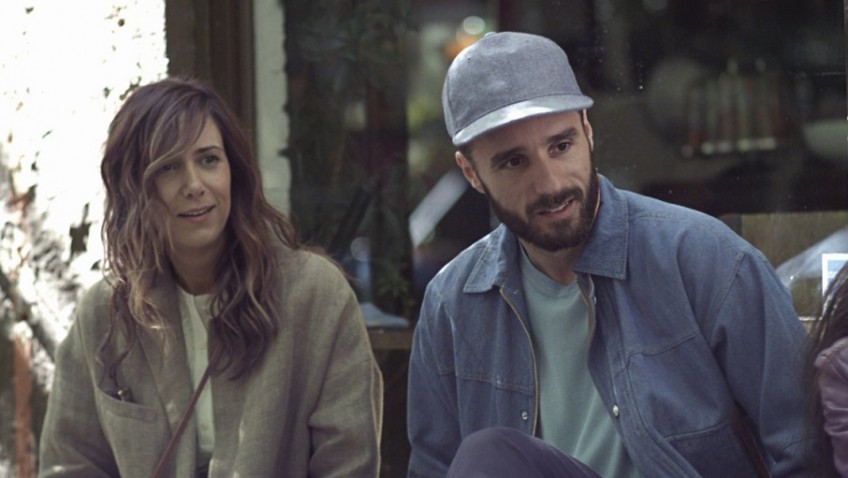 is too uneven in tone, and familiar as a satire to challenge the weird and wonderful Crystal Fairy & the Magical Cactus as Silva’s masterpiece, but, set in the trendy neighbourhood of Fort Greene Brooklyn, Nasty Baby

breaks new ground in a totally different way. Imagine if Spike Lee teamed up with Jedd Apatow and Alejandro Jodorowski and you have an idea of what’s in store.

The film begins like a Jedd Apatow comedy with a self-important and not entirely sympathetic group of middle-class friends discussing babies and pregnancy. Polly (Kristen Wiig) is a self-obsessed, wilful single woman and a doctor who informs her gay sperm donor Freddy (Sebastián Silva), that his sperm count is too low for him to be her baby’s father. Desperate to ‘do it’ at her next ovulation, Polly insensitively pressures Freddy to convince his boyfriend Mo (Tunde Adebimpe) to do the deed. Mo shows little enthusiasm at first but, eager to please and to become a father, steps in to help.

Freddy, a performance artist, has been planning an artists’ video installation entitled, Nasty Baby, to celebrate his fatherhood. The film consists of none other than Freddy, on his back in a t-shirt screaming like a new born. The news that he will not be immortalised with his own real baby shakes him. Freddy decides to include other adult babies in the video, without consulting the gallery owner (Neal Huff) – whose demeanour suggests he will reject the project. Freddy’s temper flairs when the gallery owner informs him that he has to consult a kind of oracle – a display in the gallery — as the owner does not make the decisions. If this isn’t a satire on the New York gallery scene, nothing is, but it’s not particularly funny or new.

The self-satisfied, trendy lifestyle inside Mo’s plant-covered upscale apartment is threatened by two external forces. The first is represented by Mo’s homophobic sister (Marsha Stephanie Blake) who is herself pregnant and does not hide her condemnation of alternative means of insemination. Her tirade makes a celebratory dinner at Mo’s parents’ house very uncomfortable. The threat is somewhat weakened by the fact that Mo’s parents seem to have accepted their son’s lifestyle.

The second, and far more significant, force is The Bishop (Reg E. Cathey), a neighbourhood nut case. One night, in a jovial mood, Polly and Freddy stop to purchase junk items that The Bishop is selling on the steps to his building. They soon regret their mistake, all the more so as they did it for a lark. 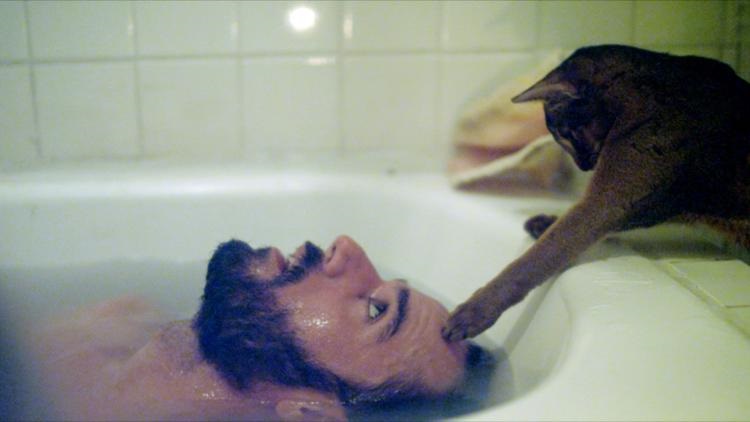 Polly makes another mistake when she quietly returns to leave the ugly lampshade she had purchased on the steps. The Bishop takes it personally and one night attacks her near Mo’s flat. A local cop claims he is harmless and that he will soon be evicted when his building is sold. If they report him he will just be back on the street in a couple of days. The friends retaliate in a puerile manner by throwing a stink bomb in The Bishop’s flat, unaware that he lives with his girlfriend.

A counter-attack some time later leads to a long night of the soul and a completely different, very dark tone overtakes the film. But if Silva never succeeds in marrying the two tones, Nasty Baby

is not a fragmented film. Silva is satirizing the nouveau middle-class in Brooklyn the way he did The Maid, a film about a live-in maid struggling to keep her job after two decades of faithful service. But here the conventional bourgeois family of The Maid is unrecognisable. The central couple are not married, and are two gay men: one black and the other an illegal immigrant. They do not have children, although they will share Mo’s child with Polly, a single mother.

The Bishop is also black (and a citizen), but what marks him as an outsider is his social status and his refusal to tolerate other minority groups. Sixty years ago it would have been unheard of for a black man to hurl abuse at a white man (even one of Hispanic origins), but here it is unacceptable for a totally different reason. Fort Greene is a middle-class, trendy and historic neighbourhood, but only 14% of its inhabitants are white; 55% are black, and 20% Hispanic.

Silva uses this demographic and the composition of his new family of friends to create what is ultimately a moral tale in which the social divide is pitted against the gender divide. The gay lobby reaches across ethnic borders in this film, but not across economic strata and is far more powerful than the unemployed, homophobic Bishop. This new social hierarchy is at the heart of Nasty Baby

just as the shifting demographics in French prison system is at the heart of Jacques Audiard’s film A Prophet. Twenty seven years ago Woody Allen set his moral tale, Crimes and Misdemeanours in Manhattan with an all white, heterosexual cast. If Silva’s film does not have the same emotional impact it is partly because we care a lot less about his characters. The concept, however, is compelling and Silva knows is a innovative and always entertaining filmmaker.