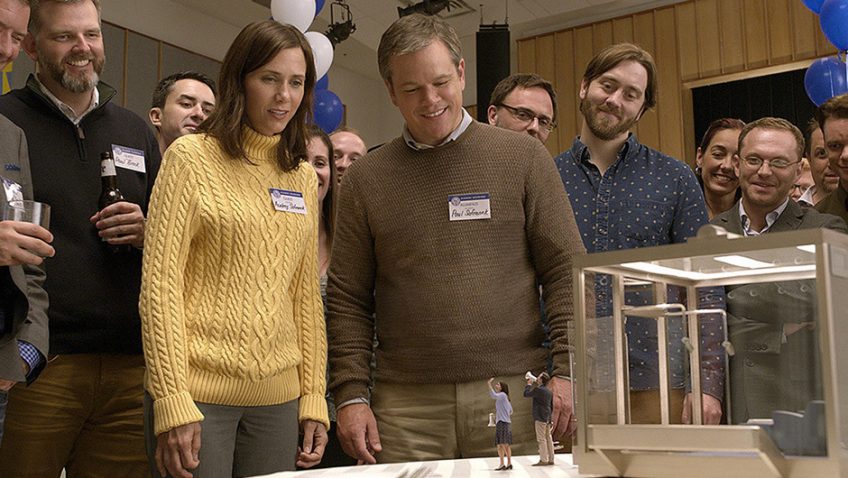 The great writer/director Alexander Payne (Nebraska, Sideways) might appear to be abandoning his character-driven American road movies to venture into Sci-Fi satire, but don’t let the high concept behind Downsizing

fool you. Matt Damon plays Paul Safranek, an ordinary guy from Omaha, who is making the best of living with his broken dream to become a doctor. Tempted by the publicity and testimonials of those who have increased their finances by decreasing their size, he takes the plunge. While Paul shrinks in size, he is stretched spiritually and emotionally on a surreal journey more akin to Heart of Darkness and City of Joy than Honey, I Shrunk the Kids.

Decent, dull and unassuming Paul Safranek (Damon) is a Mr Nice Guy who tries to do the right thing. He wanted to be a doctor, but became his mother’s carer and an occupational therapist instead. When his mother dies, Paul continues his unfulfilled life with his Audrey (Kristen Wiig), eager to give her the big house he cannot afford.

Like everyone else, the Safraneks are fascinated by the downsizing craze. Downsizing, as we see in the film’s prologue, was invented 15 years earlier by Norwegian scientist Dr. Jørgen Asbjørnsen, (Rolf Lassgård) as the only humane response to the threat of extinction from overpopulation.

Paul is attracted by the environmental benefits of downsizing while both he and Aubrey are sold on how much more house your money will buy. An old school mate, who is one of the early adopters, dazzles the couple with the prospect of $150,000 turning into $12 million, without doing a thing. There seems to be no downside to downsizing in the popular colony of Leisureland.

Payne, and his co-writer Jim Taylor have a blast visualising the Norwegian procedure that is almost frightening in the authenticity of its detail. You expect that clothes and body hair have to be removed, but you might feel a tinge of revulsion when reminded that teeth have to be removed too, as they would reach down to the Lilliputian’s waist. When the tiny bodies come out of the laboratory, normal-sized staff spoon them up with giant spatulas as if they were freshly baked cookies.

To mention the first disappointment that Paul encounters would be a plot spoiler, but it will come as no surprise to learn that for Paul at least, Leisureland is no utopia. One of the messages of the film is that you bring your baggage with you wherever you go and that love and that sometimes it’s the small changes, not the big moves that are the most rewarding. In any event, Paul ends up moving into a small apartment and working in telemarketing, further than ever from his true calling.

All work and no play makes Paul even more depressed, and so he attends an enormous party given by his flamboyant Serbian neighbour Dušan Mirković (Christoph Waltz) and his live-in German companion Joris Konrad (73-year-old Udo Kier). They are entrepreneurs for whom the Leisureland system has delivered.

Leisureland, in case you haven’t noticed from the characters’ names, is an international melting pot but it has its own social strata and its own poverty.

It is when Paul notices Dušan’s housecleaner toiling with a prosthetic leg, that we say goodbye to the Sci-Fi definitively and say hello to big, sobering socio-economic issues and romance through the back door. Vietnamese refugee Ngoc Lan Tran (Hong Chau) was forcefully downsized while serving a prison sentence for political activism. She had her leg amputated from the knee down as a result of being smuggled into the USA in a packing box. The diminutive 30-something barks in an angry, sharp shrill pidgin English that is nothing if not annoying. But Paul offers to take a look at the dodgy leg. 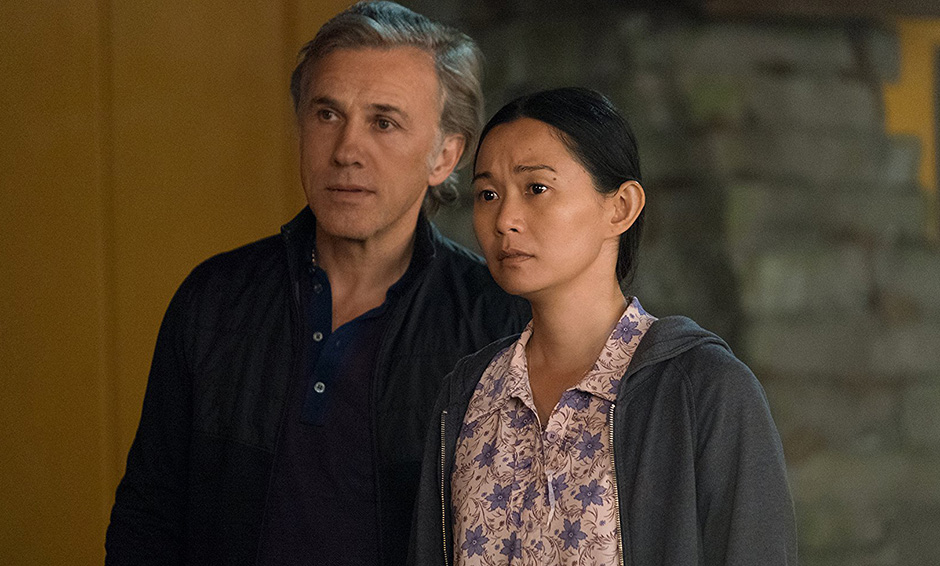 On the outskirts of Leisureland, with its villas and penthouses, lie the slums where the have-nots live, much as they have always lived, regardless of their height. In Ngoc’s tiny studio, Paul tries to repair Ngoc’s leg, and accidently breaks it. Struck with guilt, he ends up doing the cleaning at Dušan’s, sinking ever lower in the social hierarchy. Ngoc also sends him off to do her charitable work, distributing food to the infirm of the slum, until Dušan intervenes to restore the social order.

From this point on Paul’s journey is no longer vertical, but horizontal. It becomes a road movie with a meandering fjord substituting for the road.

You might find this extraordinary shift in the film a genre swap too far, or a cop out, as the theme of being little is abandoned after so much hoopla. This is a fair comment, particularly when the scenes of the downsizing procedure promise a continuation of this Sci-Fi social satire concept.

But Payne gives us clues from the start about his intentions. For one thing, Paul’s story begins in Omaha, which was the start of the road trips in About Schmidt and Nebraska. Even frustrated, Omaha high-school teacher Jim drives across country to fulfil a lifetime ambition at the end of Election. Even though the road trip in Sideways takes place in California, it is what the characters discover about themselves and what we, the viewer, discover about life, that is the subject of that film – and this.

It is also clear from the outset that Paul is not materialistic; he is a giver. As he works tirelessly with Ngoc delivering meals on wheels to the needy in Ngoc’s slum, some viewers may see the parallels with City of Joy. In that book (and film) an American doctor, disillusioned by his easy job in a Houston hospital and repentant after losing a patient, travels to the worst slum in Calcutta where the Pal family have ended up, ironically, in search for a better life.

And like the humbled doctor, Paul’s journey is not only extremely physical, but spiritual. The film ends with an expression of beatitude that is so subtle and unexpected that you feel unsettled. And then Payne adds the honking of a car waiting outside to reassure us that Paul is no longer alone.