Home / LIFESTYLE / REVIEWS > / FILM REVIEWS / The director of 78/52 returns with an enlightening dissection of the cult hit, Alien 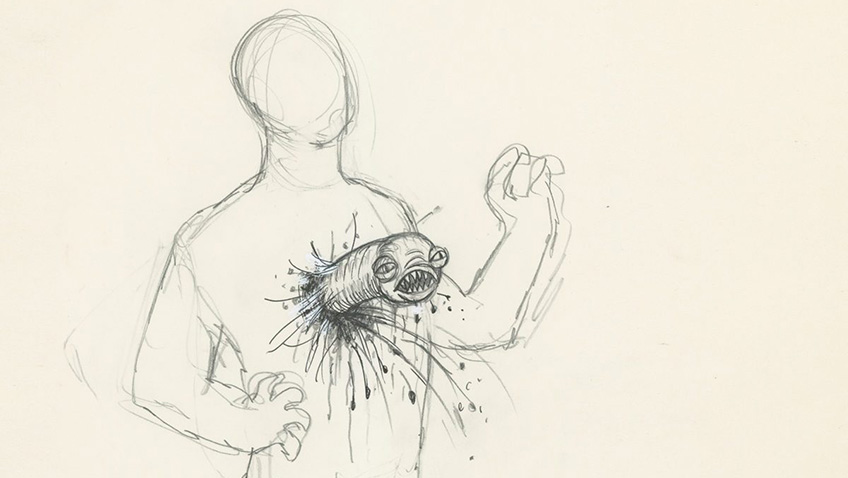 The director of 78/52 returns with an enlightening dissection of the cult hit, Alien

That it is already the 40th anniversary of Ridley Scott’s ground-breaking, sci-fi horror film Alien might shock the baby boomers, but there is an upside to this rapid passage of time. The anniversary provides the launchpad for Alexandre O. Philippe’s enlightening film Memory: The Origins of Alien

. Even if you never were an Alien fan, this documentary is guaranteed to make you want to see it again. If you have never seen the film, never mind, for Philippe includes so many generous clips that you are able to grasp the points he is making.

The film traces the development of Alien from maverick writer Dan O’Bannon’s script Memory, that was to be directed by Walter Hill, to the then little-known director Ridley Scott’s masterpiece.

According to O’Bannon’s widow Diane O’Bannon, who is the principal talking head, and naturally prejudiced, O’Bannon, born and raised in rural Missouri with no TV and no library, somehow knew about the Greek furies at the Temple of Apollo in Delphi Greece, although he preferred comics to great literature. After art school he went to film school at USC where he met John Carpenter, his collaborator on their Sci-fi student film Dark Star (1974). Carpenter and O’Bannon fell out when Carpenter refused to give O’Bannon co-director credit, but like many falling outs, there was a big silver lining for O’Bannon.

O’Bannon went off to write his own Dark Star, and it would be a horror film that eventually was entitled Alien. Dark Star, Diane points out, was the comic version of Alien, and Alien was a far cry from a student film, taking about 10 times its budget at the box office and spawning a sequel.

Alien did not come out of a vacuum. If the major literary influence was the “weird fiction” of H.P. Lovecraft, and in particular, The Mountains of Madness

with its indestructible creatures from an unknown time and place, the movie references are more plentiful. In the 1958 movie The Terror from Beyond Space, an alien stows away on a ship and picks off the crew one by one….In The Planet of the Vampire (1965) we follow the nightmare encounters of the crews of two giant spaceships that have crash landed on an unexplored planet. In 1966 Roger Corman, influenced by a Russian sci-fi film set in outer space, released Queen of Blood. After Alien came out Curtis Harrington, the director of Queen of Blood, commented that Alien was a greatly enhanced and more expensive version of his 1966 film.

But it was the serendipitous confluence of visionary O’Bannon (and Ronald Shusett), Swiss artist/model maker H. R. Giger, and Ridley Scott (who apparently shared camera duty with commercials cinematographer Derek Vanlint) that made the film so successful. One of the most astonishing aspects of the film for audiences today is that there was no CGI (computer generated imagery), and all the lighting and special effects were done in camera.

The evolution of the film’s packaging is a tutorial on how the movie business works. Hill, the fine director of the buddy action/comedies Red Heat and 48 Hrs.; the westerns Wild Bill (1995) and The Long Riders, and several good crime dramas, was a very bankable talent in the 1970s. O’Bannon and his collaborator Ronald Shusett approached Hill’s production company, Brandywine, to produce Alien along with Hill’s partners, Gordon Carroll and David Giler. Hill’s name as director could secure the financing.

O’Bannon knew that Giger, a visionary of original, powerful and mythical, timeless art, was the only set designer possible for the film, but the producers did not share O’Bannon’s view and Giger was sacked. O’Bannon had to pay Giger out of his own pocket for the work he done at that stage. Hill was never enthusiastic about making the film and when he decided to make Southern Comfort, which he had also co-written, the search for another director began.

In 1979 Ridley Scott was known as the commercials director of the successful Hovis Bread advertisement, Bike Round, but, in 1977 his first feature film, The Duellists, also attracted attention. Scott was not only a sci-fi fan from childhood but learned to draw and paint at the Royal College of Art and did his own story boards. When, based on The Duellists, Scott was brought on board, he recognised Giger’s brilliance and insisted that Giger be reinstated on the film.

In his 2017 analysis of Hitchcock’s Psycho, entitled 78/52, Philippe dissects the pivotal shower scene, and here the seminal “chestbuster” scene is scrutinized in fascinating detail. The first third of the film is deliberately slow and tense so that, as with the shower scene in Psycho, everything leads up to Kane’s (the late John Hurt’s) fateful meal when he begins convulsing, and everything that we see is the result of the horrific sequence that follows. The all-important “creature” was based on the Francis Bacon triptych Three Studies for Figures at the Base of a Crucifixion, itself based on the Eumenides – or Furies – of Aeschylus’s Oresteia, which O’Bannon and Giger responded to.

Scott kept the rest of the crew in the dark about the “chestbuster” scene so that the reactions of shock and horror the audience witnesses as they are splattered by blood and flying utensils are as authentic as possible.

Philippe’s explorations of the political and social context of the film, its gender politics and sexual tensions – beginning with the casting of a woman – the unknown Sigourney Weaver – as Warrant Officer Ripley, are equally insightful. Some of Philippe’s analysis might be stretching things, and there is a degree of self-congratulation and hero worship amongst the interviewees but if you enjoy analysing films in their historic context, this is the film for you.