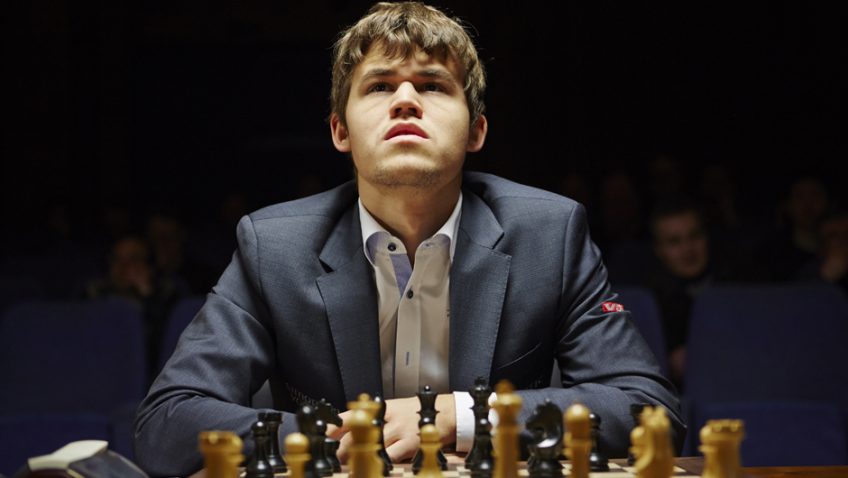 If you missed this riveting biographical documentary when it was released theatrically, do not despair.  There is no better Christmas present for chess lovers or those in search of an uplifting story about the unfathomable human mind — than Magnus, available on Digital, VoD, Blu-ray and DVD from today.

The 25th November theatrical release coincided with the 2016 World Chess Championships in which 26-year-old Norwegian chess prodigy Magnus Carlsen defended his title. No spoiler here: Time Magazine puts Magnus Carlsen on their list of the 100 most influential people in the world and his status as the highest ranking chess playing in history, mean that many readers will know the outcome of the matches featured in the film.

That does not, however, make the matches any less thrilling.  With this child prodigy, the surprises are elsewhere.  As we hear one commentator remark: ‘no one can explain how he does what he does. It comes from another world.’ And let’s face it, few of us can understand chess-speak anyway.  It’s the idea of chess – and Magnus’s baffling, beautiful and brilliant mind – that is so captivating for outsiders.

Born in 1990, Magnus’s amazing life has been documented in home videos by his father Henrik, who appears throughout the film.  Henrik is the enabler who has kept Magnus on track, helped him relax and nurtured his gift, while staying in the background.  And so we watch four-year-old, angelic Magnus walking into a fence rather than jumping over it. ‘It was hard to give him instructions on how to do things physically,’ Henrik narrates. “He was often lost in thought when he was young.’

These home videos, along with archival footage and director Benjamin Lee’s (a fellow Norwegian of Magnus’s age) interviews with Magnus, his supportive sisters, other players and experts, allow us to get close enough to Magnus to feel for him and root for him.  Getting close to Magnus is problematic, however, even for his family who tell us that he will suddenly tune out – disappearing into his own world.

The key to Magnus’s particular style — ‘playful’, intuitive and seemingly spontaneous – could be his ability to project patterns before they materialise. Henrik noticed his four-year-old son’s ability to concentrate for hours at a time, and, when Magnus began seeing relationships between numbers, his parents introduced him to chess.

When, in 2004, Magnus becomes the youngest Norwegian Chess Champion (he is the third youngest grandmaster in history (13.5) and the youngest World Champion), he and his father begin to travel the world.  School and social life (of which we learn nothing) fall by the wayside.  School was never pleasant for Magnus, in any event.  In ninth grade he was bullied by a school gang.  ‘It’s hard to be cool when you play chess,’ he says.  If only those bullies could see him now, dubbed the ‘Justin Bieber of chess’; beating Bill Gates in 71 seconds in a televised game; and a role model for thousands of adoring fans with a net-worth of $10 million.

Even on the plane to matches and exhibitions, Magnus is playing chess or studying New Chess magazine on which his handsome face (he looks like a cross between Matt Damon and Jay Leno) figures time after time.  Age 14, Magnus, ranked no. 786, travelled to Iceland to take on no. 1 ranked player Garry Kasparvo.  The score is a draw. ‘It was a positive experience,’ Magnus comments with typical understatement. Following that game, Magnus proclaimed, ‘I want to be World Champion. I am doing all I can.’  And what he does is impressive.  At an exhibition at Harvard University the 22-year-old plays ten simultaneous games blindfolded against top players – and wins.

But the focus of the second half of the film is his bid to take on Viswanathan Anand, the World Champion for five consecutive title years, in his home town of Chennai, India.   Anand, 21 years Magnus’s senior, changed the chess world by learning the game on computers. He has become such a computerised player that Magnus’s biggest fear is losing a game without Anand ever having to think for himself.   Anand is aided in this strategy of ‘preparation’ by a team of grandmasters whom he has put up in Chennai’s Hyatt Hotel. They use special programmes to study Magnus’s past games so that Anand can map out a plan that anticipates his moves.

In contrast, Magnus tells us, ‘I often make decision based on intuition…When I see a chess position I always have an idea right away of what I should do. I see these things immediately – pieces appear in the squares automatically – where other people see chaos.’  What Magnus does see – that he hides from others – is what he calls his demons.  The higher the stakes, the more unbearable the tension, and in Chennai, it gets the best of Magnus. But even Anand, initially complacent, in control and victorious, soon begins to see chaos.

Director Benjamin Ree “wanted to understand how Magnus’ brain works and find out who he really is on a deeper human level.”   Not even Magnus understands how his brain works and we never learn much about Magnus’s personal life.  But Ree does tell us an awe-inspiring story of the evolution of a chess genius.  It is also the story of a boy who has evolved from an introverted, bullied geek to a level-headed and sociable ambassador for the game. A man who has learned to live with his demons.