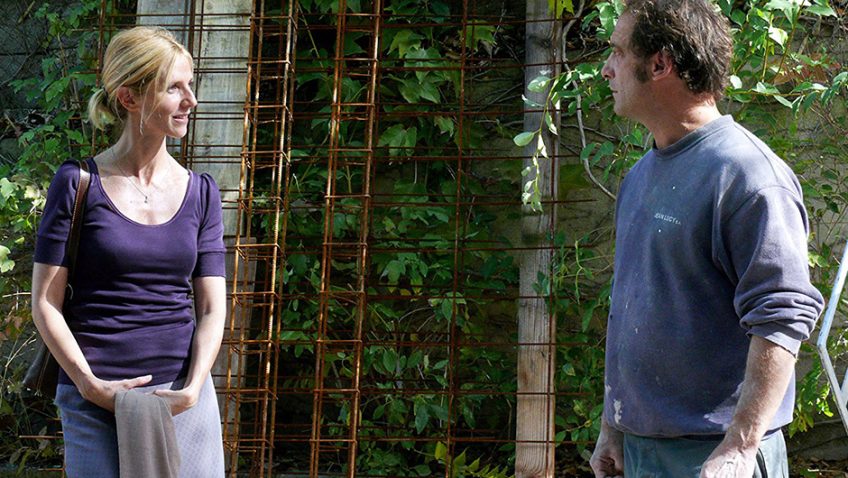 , a three-hander about a happily married construction worker (Vincent Lindon) who falls in love with his son’s teacher (Sandrine Kiberlain), is a simple and familiar story, but it is a universal one. In the hands of French director and co-writer Stephane Brizé, it is also very real, emotionally engaging, and well-acted by former husband and wife, Lindon (Anything for Her) and Sandrine Kiberlain (A Self-Made Hero).

an anaemic version of Catherine Corsini’s 2009 high octane, melodramatic Leaving, in which housewife Kristin Scott Thomas leaves her cruel, bourgeois husband, her children and her comfortable life for a rocky future with a Spanish workman. But that would be missing the point.

In Brizé’s film, based on the novel by Eric Holder, Jean (Lindon), a mason, is not fleeing a cruel, cold spouse or an unbearable life. Jean takes pride in his job as a mason, comfortable suburban home, and in his beautiful, vivacious wife, Anne Marie (Aure Atika, The Beat that my Heart Skipped), a factory worker with whom he is still in love. Yet when Jean volunteers at son’s (Arthur Le Houerou) school, he is seized by an inexplicable attraction to Mademoiselle Chambon (Kiberlain), a gangly, freckled teacher with a slew of neuroses.

Jean appears attracted to the teacher’s exoticism, if not her superior intellect. She might be attracted to his strapping physique, working-class solidity – and how he plays the awestruck, frightened boy around her. While Jean and all his friends married and settled down reasonably young, Mademoiselle Chambon has never married and can’t seem to set down roots anywhere. If Jean and Anne Marie struggle to help their son with the homework that Mademoiselle Chambon assigns, Jean struggles to keep his carnal longings under wraps.

What ensnares Jean is that Mademoiselle Chambon was once a professional violinist with a promising future, and when she plays a piece by the early 20th century Hungarian composer Franz von Vecsey, he is struck by how limited his life has been. From then on, he is torn by the desire to run away with her and experience a different way of life and the duty to accept the life he has chosen. Brizé’s film and his usual writing partner, Florence Vignon strive to differentiate their film from many forbidden love stories in its exploration of ordinary lives upset by an inchoate desire that neither be consummated nor ignored. And just as Anne Marie isn’t a harpy, so Mademoiselle Chambon, who is probably approaching 40 in the film, isn’t the younger woman, a femme fatale or a marriage breaker. In fact, Mademoiselle Chambon is willing to sacrifice the offer of a permanent job and leave town to avoid temptation. So while she and make to make it easier for Jean, she isn’t losing sleep over Anne Marie either.

You get the impression that this mysterious teacher might have become involved with a married man before, but that this time, if there’s any possibility of it working, she wants a chance at love. Kiberlain, who was so terrific in the title role of Claude Miller’s intriguing film, Betty Fisher and Other Stories, conveys with her measured gait and bearing, intense gaze, cautious movements and clumsy gestures, all of the subtleties of her character. Perhaps there is a bit too much subtlety, however, as Mademoiselle Chambon remains a superficial construct and you cannot really imagine Jean living with her.

The film is appropriately small scale but at times Brizé tries too hard – for example, in the scenes showing Jean cleaning his father’s feet – to convince us of Jean’s strong roots and dependable nature. But Vincent Lindon is such a good actor that he doesn’t need that much help. His performance is perfectly judged, and you really feel his bewildered anguish, even if you might not share his attraction to Mademoiselle Chambon.