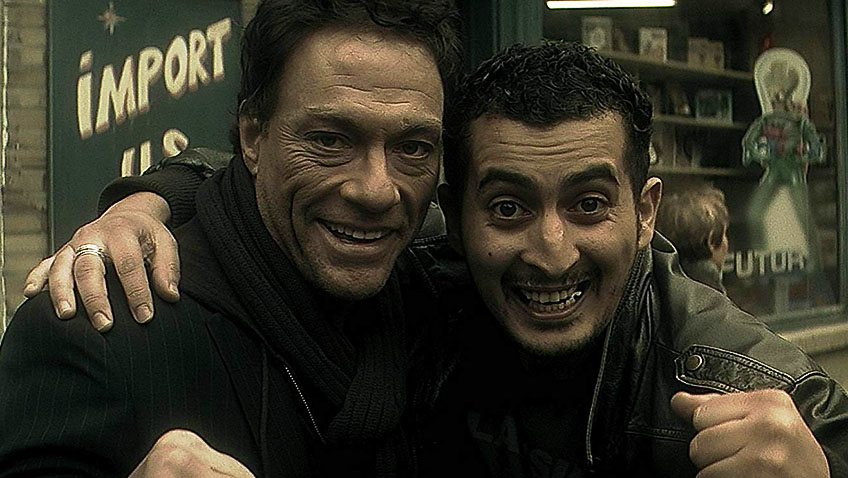 The life of martial arts movie star Jean-Claude Van Damme (Blood Sport, Timecop), dubbed ‘the Muscles from Brussels’, is such an action packed, rags-to-riches action story that it’s not surprising he, and French script writer/director Mabrouk El Mechri, had the idea of using it as the basis for a movie in which Van Damme stars. What is most striking is that the film focuses not on the glamorous life style of an action hero and superstar, but on the messy personal life and financial and professional worries of a 47-year-old who can no longer command the top salaries or find roles in Hollywood.

Van Damme opens the film in a sweaty undershirt kick boxing his way through dozens of attackers in a low budget Asian B movie where he’s clearly frustrated. ‘It’s not working! It’s very hard for me to do it in one take,’ he complains to the oblivious young director and producer; ‘I’m 47 years old!’

Involved in a custody battle and bitter divorce, Van Damme stops his taxi at a post office bank in Brussels where he has just minutes to wire funds to his lawyers before they stop representing him. Unfortunately for Van Damme, he picks a post office that is being robbed and ends up a hostage who the armed robbers force to negotiate with the police.

The police believe Van Damme to be behind the situation and, given his reversal of fortune, his agent and lawyers are willing to believe the worst. Crowds rooting for Van Damme surround the building while the action inside the post office is alternated with flash backs of how he ended up there. Although there are some humorous patches, this is a overwhelmingly sad movie illustrating the adage that the higher you climb the harder you fall.

In a tearful, semi-coherent monologue delivered direct to the camera Van Damme expresses his regrets and fears about starting anew at his age. ‘I wanted to start again in Brussels where my roots are. I don’t want to kill people, they’re all so beautiful.’ In any event, Van Damme is now living in Hong Kong and directing a film in which he stars: Eagle Path. Until then, this entertaining and thought-provoking film is one of Jean-Claude’s best and shows there’s more to the man than a great pair of biceps.