Home / LIFESTYLE / REVIEWS > / FILM REVIEWS / Fly away to a fantasy world, grounded in a grim reality 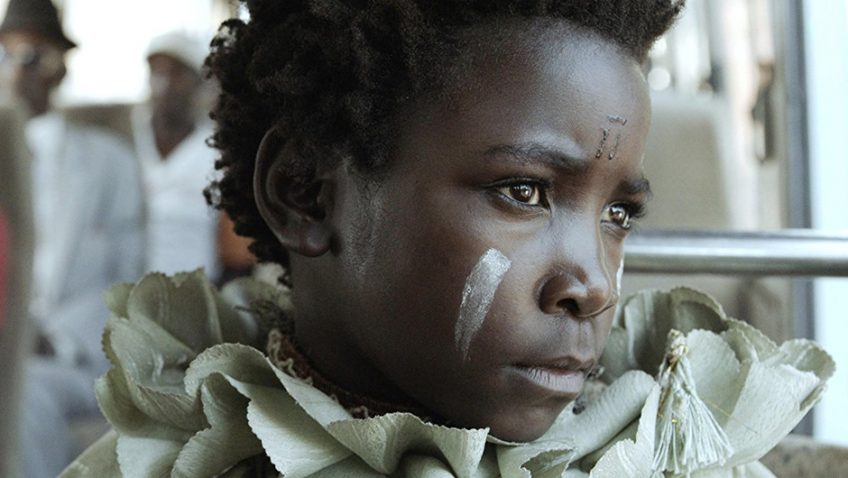 Fly away to a fantasy world, grounded in a grim reality

On one dry summer’s day, a witches’ camp in the Zambian outback receives its youngest member: nine-year-old Shula (Maggie Mulubwa). She is cared for by her elders, but exploited as a celebrity truthsayer who must judge men’s guilt or innocence. I Am Not a Witch is the feature debut of Zambian-born, Welsh writer/director Rungano Nyoni, who, inspired by a spate of witch accusations in her homeland, began to research the subject, even obtaining permission to experience life in a witch camp in Ghana. If her film is more intriguing than satisfying as a dramatic narrative or feminist satire, it is not because Nyoni has nothing to say or to show to us. She raises fascinating issues and delivers images that are like nothing we’ve seen before.

A small, rickety bus unloads a group of tourists in a remote scrubland somewhere in Zambia. A tour guide (Victor Phiri) leads them to a group of women behind a barbed wire fence. They sit in rows with their legs stretched out in front of them and white paint on their faces, completely silent and then shaking and changing on queue. Here is where Nyoni adds a fanciful touch the grim reality of the witch camps. The women are tethered by a bar on their back to a spool of ribbon stuck on a large pole, presumably to keep them from flying away.

Now, you might suppose that communities plagued by witches would want them to fly away, which leads us to the issue of modern slavery, though it is never explicitly referred to in the film. These witches work the fields, harvest the crops and entertain the tourists for someone else’s gain. The tour guide fields questions like a zoologist at a zoo and, an apt analogy as these gap-toothed women are treated like human animals.

A villager (Eunice Mapala) carrying a bucket of well water on her head, trips, and accuses the nine-year-old girl in front of her (Mulubwa) of being a witch. In a farcical scene the villager files a complaint with a local police officer (Nellie Munamonga). ‘Since she came to this village strange things have been happening,’ the woman states, adding – not as a mitigating factor, but as damning evidence: ‘she has no friends or relatives.’

Since the little girl, Shula, is alone in the world and unable to represent herself, the police woman phones Mr Banda (Henri B.J. Phiri), a corpulent government official who lives in a bland, nouveau riche villa with tight security. Resembling a baby rhino, Mr Banda is being bathed by his wife, who is wearing high heel shoes and a skin tight pencil skirt. A former witch who has traded her ribbon for a wedding ring, she will later tell Shula: ‘just do as you’re told and you’ll end up like me or better.’

In one of the most startling and surreal images of the year, we see the witches being transported to the fields in an open truck. They sit motionless, the tall spools of ribbons sticking out of the truck like sails on a ship, or like straws in a drink, or like swords in a stone.

Shula, too, is affixed to a spool and told that if she detaches herself she will turn into a goat. But working the fields is not her destiny, nor is going to school, although there is talk of sending her. Instead, she is dressed in a ceremonial robe and sent to administer justice. Standing in front of a line-up of miserable suspects, Shula is meant to choose the guilty party on her witch’s intuition.

More terrifying for Shula is an appearance on television where, never the talkative sort, she remains totally silent after Mr Banda’s jovial introduction. Filling the awkward silence, the talk show host asks him: ‘what if she’s not a witch? What if she is just a child?’ The camera scans the largely female audience whose foreheads wrinkle at the prospect.

And for most of the film we are too horrified at the imprisonment (and physical branding) of impoverished women and children to appreciate it as satire. Before you can satirize something, the topical issue or practice being ridiculed needs to be identifiable and familiar. One of the wonders of the film is that almost nothing is familiar and almost everything is unfathomable.

While it is admirable that Nyoni never destroys the atmosphere with expository explanations and that Maggie Mulubwa is equally disciplined with her emotions, you might find yourself more intellectually than emotionally engaged.

Perhaps it is enough that we are left to marvel at this surreal, but real, and tangible but impenetrable world, brought to life by cinematographer David Gallego’s (Embrace of the Serpent) magical-realist cinematography. Just wait until the scene in which the witches try on coloured wigs named after western celebrities and trade them for bottles of gin.