Home / NEWS / CAMPAIGNS / Get out the binoculars, red deer are ready to rut! 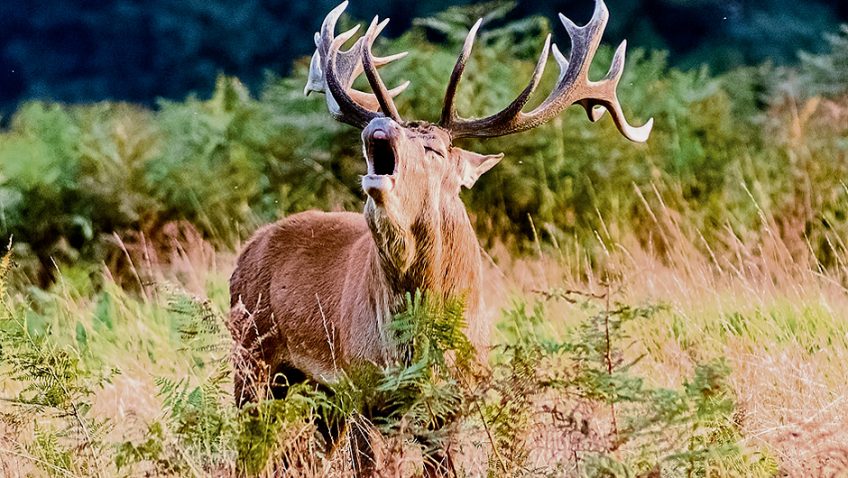 Get out the binoculars, red deer are ready to rut!

Red deer are famous for their elaborate breeding behaviour: the herd swells in size as the females are joined by playful young males, closely followed by the large intimidating stags, intent on nothing else but mating. The male with the loudest bellow is the strongest and holds court with a harem of females in the centre of the rut. Sometimes bellowing isn’t enough though and battle takes place when a stag of a similar size decides to try and steal the females from him. The rival paces back and forth sizing up his opponent. If he decides to fight they lock their antlers in violent conflict but this is a last resort as injury can be fatal. The fight is often over quickly with the winner taking the spoils as the vanquished goes and licks his wounds.

October is the best month to witness the spectacle of the rut and the best time to watch the deer is just after dawn and at dusk when they are most active. Gareth Fisher, RSPB senior ecologist said “Be patient and alert, listen for the bellow of the stags or other vocalisations and look ahead as you may see deer in the distance. Move slowly and try not to make lots of noise, and walk behind undergrowth to be less obvious. Most importantly be cautious when viewing or photographing the animals as male deer are highly aggressive in this season. Don’t get too close.”

To see this stunning wildlife spectacle up close you can visit the following RSPB reserves that are home to deer:

RSPB Minsmere in Suffolk has a large herd of red deer, they thrive in a varied mix of habitats, including reedbed, heath and woodland, helping Minsmere’s herd to grow into some of the largest in the UK.

RSPB Arne in Dorset has a herd of around 200 Sika deer. These deer are originally from Japan and were introduced to Poole Harbour around 120 years ago. The deer can be spotted all over the reserve in all habitats but around the rutting season the best place to see them is on farm fields close to the main trails. The deer can be surprisingly close to the paths so visitors can get some fantastic views. The call of the males is also worth getting to the reserve early to hear, the sound somewhere between a creaking door and a screaming child.

Eastern Moors on the fringes of Sheffield run deer walks during the red deer rutting season, along with the annual ‘Bolving Championships’ on the 14 October. Bolving is the imitating of the stag’s bellow or roar, which can be heard across the moor throughout the rut, to attract the hinds and show strength and position to competing stags. Participants in the bolving competition ‘bolve’ from the dam wall across the moor in the hope that a stag bellows back.

RSPB Haweswater in Cumbria has a great red deer rut and the deer are part of the Martindale Herd, the oldest native red deer herd in England.

RSPB Leighton Moss in Lancashire is one of the best places in the country to see red deer in their natural surroundings. Each year, visitors to the reserve come to catch a glimpse of these magnificent creatures as they emerge from a small gap in the vast reedbed and make their way to the water’s edge. In the summer months there is a ‘Bambi Boom’ where the females are seen with their young, spotty calves. In the autumn, during the rut, the males are much less friendly and can be heard bellowing and roaring across the reedbed at one another and can often be spotted in the early morning clashing antlers.

So go and try and see the rut. It’s a great way to get outdoors and see one of nature’s magnificent animals in its natural habitat – even if you don’t see the rut the sight of a stag in his prime is worth the effort – they truly are magnificent creatures.