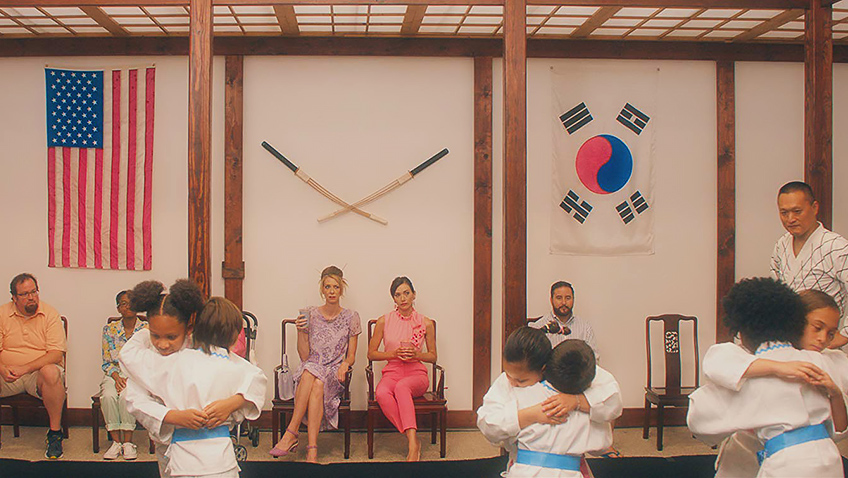 This L.A. import is surely the most outrageously imaginative comic satire of the year. Based on their successful short film of the same title, Greener Grass is the debut feature of writer-director team Jocelyn DeBoer and Dawn Luebbe who also star as a pair of Stepford-like wives and best friends competing for perfection. Jill (Deboer) and Lisa (Luebbe) are such good friends that Lisa does not immediately notice Jill’s new baby. ‘Yes’, Jill replies, ‘we thought we’d try something new.’ When Lisa cannot get over how cute Page is, Jill asks, ‘Do you want her?’ After some mock hesitation, Lisa takes the baby, renames her Madison and refuses to give her back, even after Lisa has given birth to her own – soccer ball. 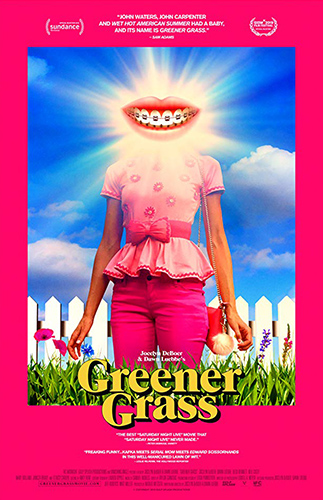 Here’s the thing with DeBoer and Luebbe’s vision: it’s not your typical satire, like George Clooney and Grant Heslov’s Suburbicon, where you recognise the world, the exaggerations and precisely what is being targeted. DeBoer and Luebbe have created a world that just recognisable enough to appear frightening. And as Lisa, plagued with jealousy, desire and feelings of inferiority, grows determined to ruin Jill’s life, so Greener Grass morphs from an absurdist comedy to a pastel-coloured horror movie.

United in their goal of fitting in with their sheltered, pristine, close-knit planned community, the doctrine of conformity is such that everyone wears braces, a symbol perhaps of the chains that lock the inhabitant’s together In this highly stylised world (Lauren Oppelt’s costumes are worth the price of admission), everyone drives around in a jeep-like golf mobile and no one dares to be the first to cross a four-way intersection for fear of showing aggression.

Couples do get divorced, but no one argues loudly. When Jill mentions to her husband Nick (Beck Bennett), ‘it was so nice to see Madison (‘you mean, Page’ Nick intervenes) today’, Nick replies, ‘well, we used to see her every day.’ Sensitive to the reprimand, Jill asks if he is angry with her for giving away their baby. Nick only requests that ‘next time’ Jill might wish to discuss it first.

Auden’s This be the Verse comes to mind when we witness the effects of bad parenting skills as the couples compete through their offspring. Jill’s son Julian (Julian Hilliard) and Lisa’s son Bob (Asher Miles Fallica) are troubled kids who hear their respective parents putting them down and comparing them to other children. Julian still wets the bed while Bob stops smiling.

Both boys are in the same music competition, with Bob butchering his piece on the clarinet and Julian, playing the same piece on the piano – only he doesn’t. He decides to play a piece he composed that can be politely labelled atonal. That evening, Bob defends his performance, pointing out that it was a lot better than Julian’s: ‘he can’t even read sheet music.’ Lisa, unwilling to encourage Bob, replies, ‘Beethoven couldn’t read sheet music either.’ Similarly, Jill tells Julian that he’ll have no more piano lessons because he humiliated the family with his improvisation.

Much to his parents’ dismay, Julian, who cannot catch a ball, tends to lie down on the football pitch and feign injury rather than play. Realising he is a disappointment to his parents, on Nick’s 40th birthday party, Julian sings happy birthday off key and then falls face down into the pool. When he emerges, he is a Labrador Retriever.

There goes the Rocket-maths class Julian was taking after school (Lisa scrambled to get Bob into the same class). But Nick is delighted. Finally, he has the son he can be proud of as no one catches a ball or runs faster after it than doggie Julian.

There are signs that the the façade of one big, happy, peaceful community is cracking. A serial killer is on the loose and the first victim, a Yoga teacher named Cheryl leaves behind a sister who grabs all the media attention and a boyfriend who is already engaged to someone else. Meanwhile Julian and Bob’s second grade teacher, Miss Human (D’Arcy Carden) is obsessed with a mass murder in her family which finds its way into her morbid lessons on America’s wagon train families.

And if Julian is now a dog, Bob starts acting (and sounding) like Regan MacNeil in The Exorcist after Little House on the Prairie turns into an episode of Kids with Knives while Dennis (Neil Casey) is asleep on the sofa.

While Lisa has three kids to Jill’s zero (barring Julian), she remains jealous of Jill’s active sex life and happy marriage. One day at the bowling alley Lisa suggests that Jill would be happier divorcing Nick and, eager to please, Jill immediately breaks the news to her heartbroken husband After Nick takes sole custody of Julian and the substitute Yoga instructor kicks Jill out of her own home, Jill goes off the rails.

The filmmakers rely on their talented crew, including the aforementioned costume designer, Samuel Nobles’ brilliantly off-kilter score, Kristin Gibler’s art direction and Leigh Poindexter’s production design to transport us to a kind of 1950s America that was more Edward Hopper than Norman Rockwell.

Not everything works: We could have done without the two couples tucking into food spilt on the floor of a restaurant to spare a clumsy waiter’s embarrassment. And a few scenes go on too long, as though the filmmakers are running out of ways to sustain a flimsy plot. But when a distraught Jill defiantly takes to the road, we realise how quickly we have been conditioned to the insular community in which we had been so uncomfortably imprisoned.