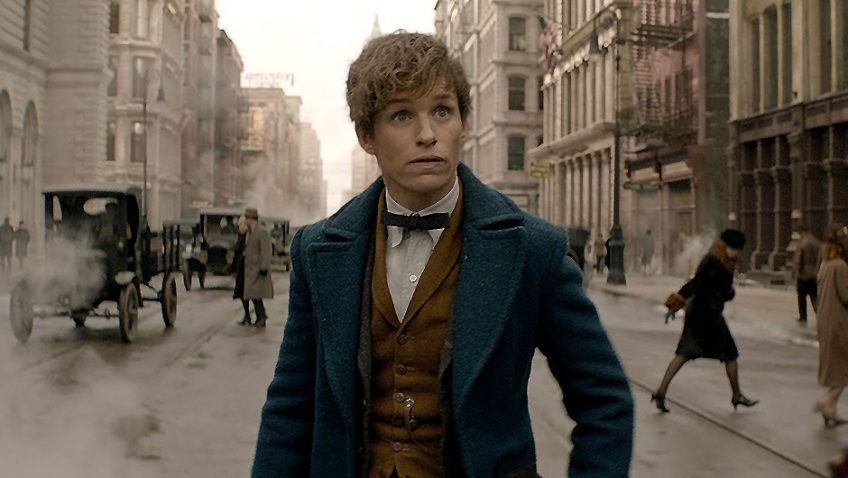 Fantastic Beasts and Where To Find Them

is not only a long, lavish and visually dazzling spin-off of the Harry Potter phenomenon, but cultural and cinema history in the making.  Based on JK Rowling’s 2001 fantasy novel of the same title, written under the pseudonym Newt Scamander – a zoologist whose name sounds suspiciously reptilian – it was also Harry’s textbook, referred to in Harry Potter and the Philosopher’s Stone.  Fantastic Beasts and Where To Find Them

is the first of a five-part series and the scriptwriting debut of Ms Rowling, who also co-produces.

You won’t find many young, yet alone Harry Potter characters here (the film takes place in an atmospheric and beautifully depicted New York City, 1926), but there are links to the Harry Potter series, not the least of which is Rowling herself.   And Newt, an elasticized, boyish Hugh Grant, played by British-actor-of-the-moment Eddie Redmayne, is an alumnus of Hogwarts.  David Yates, who directed the last four of the Harry Potter films returns, but, given Rowling’s, infinite talents and empire (a child’s ticket for the regularly sold out Leavesden Studio Tour will set you back £37); who would bet against Rowling taking over as director?

Newt Scamander (Redmayne), the David Attenborough of wizardry, arrives in Prohibition era New York City’s Port Authority with a suitcase containing a host of endangered creatures collected in his travels. A suspicious customs official doesn’t see the case’s magic latches in action, so what he does see is mundane display of neatly packed men’s clothing.

The first New Yorker Newt encounters, Mary Lou Barebone (Samantha Morton), is a member of the Second Salemers. She introduces an increasingly tiresome subplot to a film that does not have enough of a plot to contain it.   Rowling wants to remind us of the 17th century Salem witch trials and Barebone is like one of those Hyde Park nut cases preaching about the evil existence of magical people in NYC.  She is right, of course, because the MACUSA (the Magical Congress of the USA) has a huge presence in a parallel reality in NYC.

Barebone is a human witch and foster mother to nerdy, cowering Credence (a convincing Ezra Miller), — whom she beats with a belt — and Modesty (Faith Wood-Blagrove), a young Carrie (and the only key child in the film).  Modesty is suspected of being possessed with an Obscurial.  That, readers, is a dark force created to help young magicians hide their identity from ‘no-majes’ – American for ‘muggles’. Colin Farrell in Fantastic Beasts and Where to Find Them

Percival Graves (Colin Farrell), Director of Magical Security for MACUSA, thinks Credence is suppressing something, and he’s not totally wrong.  Graves regularly visits Credence, promising him magic lessons in exchange for information on the whereabouts of a mysterious child suspected of being an Obscurial.  Graves wants to kill this Obscurial who is attracting the attention of US senator Henry Shaw and powerful father (Jon Voight), furious at the havoc it is wreaking.

But first things first. Newt’s Niffler — a cute, black, fluffy, burrowing creature with a duck-like orange snout and a fondness for stashing anything that glitters into his bottomless pouch – has escaped.   In arguably the best and funniest scene in the film, Newt chases the coin-hording Niffler into a magnificent bank at the same time as Jack Kowalski (show stealing Dan Fogler), an overweight, endearing, lonely factory worker, is leaving it. Kowalski’s application for a loan for a start-up bakery was rejected and he has a suitcase filled with untouched sample pastries.  Before Newt can ‘obliviate’ Kowalski – erase the magical encounter from his memory – Newt is apprehended by former MACUSA  Auror Porpentina ‘Tina’ Goldstein (Katherine Waterston) for displaying magic in public.  In the confusion, the two suitcases are swapped. Dan Fogler, Eddie Redmayne, and Katherine Waterston in Fantastic Beasts and Where to Find Them

Tina, like Kowalski, is a caring, single person working below her level in a dead-end job, but, in the absence of any chemistry between Redmayne and Waterson, Newt seems to prefer hanging out with Kowalski. Perhaps to avoid any sexual innuendo, romance with Tina is promised at the very end.  Fortunately, a truly charming romance develops between Tina’s glamorous mind-reading sister, Queenie (Alison Sudol) and Kowalski. But can a wizard mingle with a muggle, er, No-Maj?

In any event, Kowalski remains unobliterated and relatively unfazed – even when chased by a Rhino-like Erumpent in heat.  But the key scene is when the two men sneak out of Tina’s apartment and Kowalski is introduced, not to Newt’s parents, but to his secret menagerie of weird and wonderful creatures.  Kowalski is a brilliant character and serves the function of being the fortunate ‘Everyman’ who witnesses Newt’s world and whose reactions of astonishment, awe and delight we are meant to share.  He is the male Wendy to a conservationist Peter Pan.

There are messages in the film about tolerance and the preservation of endangered species that could be addressed at the new wall-building, witch-hunting US President and his elephant-trophy-hunting son.  There is also a message about unlocking the magic in all of us, brought to the fore by the fulfilment of Kowalski’s creative culinary dream.  Credence is the flip side of this; a repressed young man who finally explodes like a red-hot volcano, with his potential unrealised.

Don’t worry if you don’t see the film in 3D or IMAX 4K Laser formats: the special effects and set designs are so extraordinary they hardly need enhancement.  When a certain villainous character changes into an almost unrecognisable Johnny Depp at the end – yes, the producers are throwing everything at the series — the transition is seamless. It is the endearing animals, however, that will enthral the young viewers.

Johnny Depp in Fantastic Beasts and Where to Find Them

Fantastic Beasts is a like a surfeit of enticing, rich gifts in the toy department of Harrods at Christmas.  There is an excess of almost everything in Fantastic Beasts – including its running time.  What is in shorter supply is a plot and a tone.  There is clever dialogue and humour, mixed in with long, dark, violent passages devoid of beasts.  The main story – in which loads of creatures escape from a ridiculously small enclosure to terrorize a town – is reminiscent of RL Stine’s Goosebumps books, made into a film earlier this year with Jack Black playing an author like Newt. With the possible exception of the giant eagle-like Thunderbird that is indigenous to the American West, it’s never clear why UK resident Newt brought all the creatures to NYC to begin with.  The film is a lot of fun, but it meanders when the magic wears off.