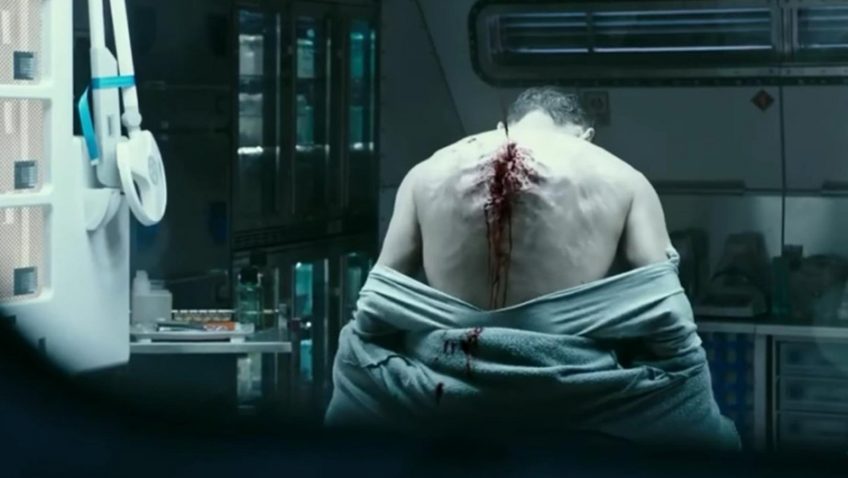 In the real world, men who are 79 are not supposed to be working at all, let alone entrusted with the staffing levels that exceed that of many companies and a budget in excess of £100 million tied to a two-hour blockbuster with a strict deadline. But there is the real world, and the world inhabited by Ridley Scott – or one of his worlds. For we are, of course, talking about his Alien franchise that began in 1979 with Scott’s break-through film Alien when he was already 42. Blade Runner (1982), Gladiator (1990) Thelma and Louise (1991) and Black Hawk Down (2001) followed. In the real world people are not supposed to be in top form 36 years after they hit pay dirt, but Scott remains firmly on the A list after The Martian received 7 Academy Awards nominations, including Best Picture in 2015.

So what about Scott’s latest film, Alien: Covenant

, set in space, 2014, ten years after Scott’s 2012 Alien prequel, Prometheus? If you put to one side (as the film does) the ‘where do we come from?’ question that dominated Prometheus, Alien: Covenant

is timely enough. Professor Stephen Hawking made news the other day announcing that the human race must colonise another planet in the next 100 years or we risk extinction.

When the film begins, the colony spaceship Covenant is already on the case, carrying 2,000 colonists (think last year’s film, Passengers), 1,000 embryos and crew members in hyper-sleep to planet Origae-6. As this is a colonising ship, the crew is comprised of couples. As in Passengers, an unexpected problem (a subatomic particle burst) damages the craft before its onboard synthetic (robot Walter, played by Michael Fassbender) can act on the computer’s (called ‘Mother’) alarm. Forty-seven colonists are killed due to oxygen malfunctions and Captain Branson is burnt alive. His grieving wife Daniels (Katherine Waterston) and the rest of the crew begrudgingly accept that the most senior officer, Oram (Billy Crudup, Jackie, Spotlight, Almost Famous) will replace the popular Branson. Oram is convinced that as a man of faith amongst scientists, he will never be trusted.

Perhaps it is his missionary zeal that causes him ignore and override the advice of his colleagues and make a detour to a near-by planet, also deemed habitable, to answer what sounds like a distress signal. As the Covenant cannot land on the planet, the search party (oddly, the majority of the crew) take a shuttle to the planet. The signal that they heard is traced to the Engineer ship from the failed Prometheus mission, where David, who is now conducting DNA experiments of his own, offers his services as their guide to a hostile planet. The remainder of the film takes place on that planet and between the planet and the Covenant hovering above it. To anyone who missed Prometheus, there is a prologue to Alien: Covenant

in the form of a meeting between the CEO of space-exploration company Weyland (Guy Pearce) and the Wagner loving android (Fassbender, Prometheus, Steve Jobs, X-Men, 12 Years a Slave) who names himself David after the famous statue. David has such an advanced brain that David and Mr Weyland can discuss anything from the arts and philosophy to science. But can David be devious as well? At the end of Prometheus, David is saved by archaeologist-turned-warrior Dr Elizabeth Shaw (Noomi Rapace), with whom he has allegedly formed an attachment. Dr Shaw, now presumed dead by those on earth, was in fact the only survivor of the Prometheus voyage and remained determined to discover humanity’s forerunners.

Walter is one generation more advanced than David technically, but a correction has been made so that, theoretically, he should not be able to feel emotion. Walter does not get off from listening to the Valhalla (home of the gods) motif from Wagner’s The Ring Cycle. We are well into the film when Walter meets David and the two bond over a technically masterful flute playing lesson, where Fassbender is literally in two places at once playing these android twins. Soon however, Walter learns the truth about David’s evil experiments. By the time Oram is given the guided tour, it is too late.

With Thelma and Louise Scott became one of the pioneers of the strong female character, and the Alien franchise is no exception. Sigourney Weaver gave way to Noomi Rapace and now to a less charismatic and animated Waterston (Steve Jobs). The men make the mistakes and the women try to clean up. Waterston is however, denied a scene as unforgettable as Dr Shaw’s self-mutilating abortion.

The production values and DoP Dariusz Wolski’s cinematography are terrific, and there are several very tense and scary moments. But unless you are a fan of hard-core horror films, it’s hard to warm to Alien: Covenant

. It is less intellectually satisfying than Prometheus despite raising the interesting question of if the human ability for playing God (through modern medical advices and artificial intelligence) is taken over by a robot.

Scientific symposia and the media are continually probing the prospect of robots taking over, and with the immensely talented scriptwriter John Logan onboard, Covenant had the potential to carry this theme forward in cinema. But instead, the film is overwhelmed by a repetitive series of horrific attacks from David’s gooey crustacean creatures that plant themselves inside their prey and eat their way out of their hosts. They burst out of their host as Xenomorphs that look like a cross between ET and little dinosaurs. One by one the crew is eliminated, but the questions of with whom David will share his Valhalla, and how they will live, are not addressed.