Home / LIFESTYLE / REVIEWS > / FILM REVIEWS / This absorbing, intimate film will humble anyone who sees it, and everyone should 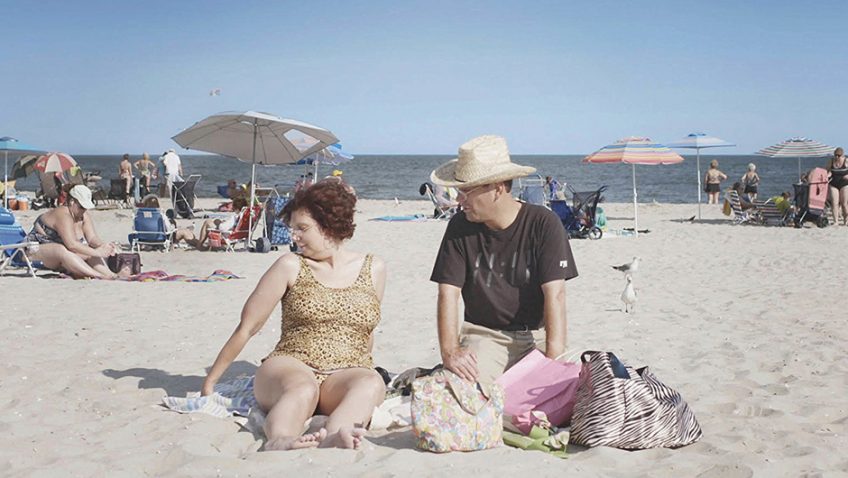 This absorbing, intimate film will humble anyone who sees it, and everyone should

Dina is a unique, beautifully made and yes, here’s that overused term again, but properly applied, ‘life affirming,’ film about a neurodiverse couple in their late 40s, Dina Buno and Scott Levin, preparing for their wedding day. It is her second, his first. Dina calls the filming experience, ‘the two most wonderful years of my life’, and her close relationship with Director Dan Sickles, whose late father was her special education teacher and lifelong friend, dispels any notion of exploitation. ‘I’m excited to tell my story of growing up on the autism spectrum and letting parents know that I beat incredible odds,’ she explains in the production notes. This intention legitimizes a scene in which Dina undresses to reveal the scars on her back as though symbolic of those incredible odds. Her life unfolds gradually through conversations and in one powerful scene that dispels any notion that Dina is a conventional documentary.

Neurodiverse is the modern term used to describe the significant population with some form of Autism Spectrum Disorder (ASD), which includes Asperger’s Syndrome, but Dina is more a character study than a film about disability. The distinctive and inventive style selected by producer/directors Dan Sickles and Antonio Santini (Mala, Mala) makes the film feel more like a romantic comedy, but one with more challenging obstacles to overcome and an extra dose of dark undercurrents. In place of the documentary’s hand held camera is a static one, allowing Dina to interact with her environment and occupy the space in each frame. To avoid the characters playing to the camera and to capture honest action and reactions, the filmmakers let the camera roll for hours until the subjects forgot they were being filmed. Some of the shots – Dina at the bus stop carrying a huge Thanksgiving Day turkey – are more artistic and emotionally suggestive than informational.

A scene of Scott walking to work as a customer greeter at Wal-Mart was shot over several days as though it were the shower scene in Psycho. Then there is the emotional boost from the filmmakers’ use of music at unexpected junctures, which, on one occasion, complements Scott’s interest in music. The songs include the Sex and the City theme; She’s A Lady, Before the Next Teardrop Falls, and, most effectively, The Seekers’ A World of Our Own. There is even guitar music by actor (Juno)/ musician Michael Cera, who starred in Sebastian Silva’s Crystal Fairy & the Magical Cactus,’ edited by this film’s talented editor, Sofia Subercaseaux.

The wedding preparations are in full swing. The couple visit the Levin’s impossibly cluttered home where Dina and her future mother-in-law discuss the bridal bouquet. Scott is moving out of the only home that he has ever known to join Dina in her modest flat on the top floor of a depressing shop-fronted building in suburban Philadelphia. Dina tells us she has been on her own for some 20 years but, ‘it will be interesting’ sharing her flat.

In addition to the attending to the usual preparations Dina takes a trip to Le Château Exotique for a red lace negligee, aware that Scott, who has Asperger Syndrome and difficulty with intimacy, will need all the stimulation she can provide. A mother-daughter trip to the beauty salon was, for Dina, the most difficult scene to shoot because they had to ‘rehash stressful moments.’

Dina’s mother talks candidly about her daughter’s various conditions – OCD, Autism, depression etc., saying, “it’s like a smorgasbord.” But she also expresses concern that Dina is making the right choice, and pride that her daughter has turned into a strong woman who speaks her mind.

The hen party sees a sympathetic stripper entertain the ladies while the stag party is a more sedate affair at a bowling alley. En route with two friends, Scott expresses his sexual ignorance with a frankness that is disarming. Though Scott’s friends are more experienced, they are refreshingly non-judgmental and devoid of cynicism.

After the Jewish wedding, the pair are driven (neither drives) to Cove-Haven honeymoon hotel in the Poconos, but Dina is annoyed when Scott walks ahead of her to the door, ‘just to get to places’. When she yells, ‘you’re walking too fast: act like you’re married!’ he waits for her. Dina gets Scott to join her in a big, champagne glass-shaped hot tub, but we get the impression the setting will have little impact on Scott’s usual habit of sleeping over the sheets with his back to Dina.

In a monumental and beautifully made sequence, Dina takes Scott to Ocean City New Jersey, a long bus trip that troubles Scott. He is rewarded, however, by his first glimpse of the ocean. ‘Wow, it’s big,’ he says before sitting with his back to the water, fully clothed. He reassures her that she is beautiful in her bathing suit and eventually she leads him to the water.

Scott frequently tells Dina that he loves her and he certainly respects her. ‘To go through what you’ve gone through and still be alive in this world is inspirational,’ he says although there is something rote about the delivery. As they stop on a boardwalk bench, Dina gives Scott a copy of the Joy of Sex as a birthday present. What again disarms us is their considerate, polite and honest discussion and Dina’s gentle, determined approach to making this marriage work.

Dina is a remarkable person, but she has been unlucky. Only 1 out of 5 females are affected by ASD. She met a man she loved but he died of cancer. Her new husband appears gentle and kind, but he is sexually and emotionally stunted, and she bears the scars of a previous relationship that turned into fatal tragedy. The filmmakers leave their exploration of this incident until late in the film, during an intimate, panoramic sunset walk along a mountain ridge. When Dina and Scott are out of frame, we hear the harrowing transcript of the emergency phone call as the sky turns crimson before darkening with the sunset.