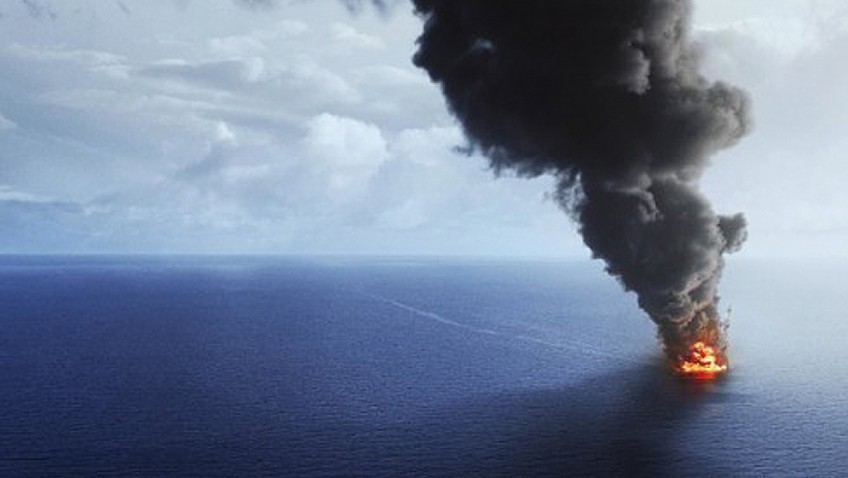 A slick, thrilling and expertly crafted movie that never digs deep into the real disaster

In Michael Bay’s thriller Armageddon, when the trajectory of a huge asteroid threatens Earth with extinction, the head of NASA calls on a team of deep-sea oil drillers to execute blow up the asteroid in space to diminish its force. In Peter Berg’s (Battleship) Deepwater Horizon it is the rig itself that explodes and few if any of the experienced deep-sea oil drillers see it coming. The 126 crew members scramble onto rescue boats, attempt in vain to slow or stop the explosion, perform acts of heroism and die in the fireball visible all the way to New Orleans. Once you accept the fact that the technical aspects of the blow-out are beyond most of us, Peter Berg’s true-to-life movie is an expertly-crafted, slick and exciting action/thriller, even if it never digs deep into to the real, natural disaster, or issues of culpability.

The film opens with an excerpt from Mike Williams’ testimony to the National Commission investigating the largest oil spill in history, so we know that he is our protagonist and a survivor. What we do not immediately know is what a hero Williams turns out to be, a role befitting the co-producer and mega-star Mark Wahlberg. There is this sticky bit, however. Berg (who directed Wahlberg in Lone Survivor) and scriptwriters Matthew Michael Carnahan (The Kingdom, State of Play) and Matthew Sand have a lot of exposition to get through in the front-loaded first twenty minutes of the film.

Chief Electronics Engineer Williams’ leave is over and he is about to return to the Deepwater Horizon for three weeks of exploration. We learn about the blow-out preventer (BOP) at breakfast when he and his wife (Kate Hudson as eye candy) listen to their daughter Sydney (Stella Allen) going through a school project on what her daddy does. ‘Daddy tames dinosaurs,’ Sydney proclaims, and the link between the extinction of dinosaurs (whose remains contribute to the sought after fossil fuels) and the 2010 environmental disaster is not just child’s play. No one but the audience attaches special attention to the soda can that explodes on the kitchen table in a makeshift demonstration of a blow-out. As Mike is shuttled by chopper from Bristow heliport 41 miles across the Gulf of Mexico to the rig, Mike catches up with the offshore installation manager Jimmy Harrell (Hudson’s real life dad, Kurt Russell), one of the most respected veterans in the business, and deputy dynamic positioning officer Andrea Fleytas (Gina Rodriguez). In a bit of feminist advocacy, her knowledge and decisiveness will prove far sharper than that of a condescending male colleague who refuses to allow Andrea to disconnect the pipe and seal the well. Though it was, by then, probably too late, this is the command that Jimmy would have given had he not been blown out of the shower unable to connect with Andrea.

Mike and Jimmy are walking right into a tense situation with the on-board representative of BP, Donald Vidrine (our favourite villain, John Malkovich), who lease the rig from Transocean. BP has cancelled their contractor Schlumberger’s cement hold test. As Jimmy, who is later awarded BP’s Highest Safety Award for the 7th year running, ominously reminds them, ‘cement is the only thing between us and a blow out.’ But BP is 47 days behind schedule and, argues Vidrine, the tests show no mud is emerging and the pressure on the standard test is good.

Here is where you begin to feel like you back in physics class with a hangover. A mechanic, clearly suspicious of BP and loyal to Jimmy, informs us that the kill line (a high-pressure pipe leading from an outlet on the BOP stack to the high-pressure rig pumps) PSI (pressure per square inch) is good but the drill pipe PSI is not normal and the two should be the same. After more talk of mud displacement machines and the like, Vidrine puts pressure Harrell to start work.

Meanwhile, Mike has been given a dinosaur fossil by a mechanic and is showing it to his wife on Skype while Jimmy takes a shower and the crew get to work. It’s not long before the mud and gases start to seep through and the BOP bursts. Once the explosions start the editing is so fast that it’s hard to know what is going on, but that is probably intentional. With the action shot on a model rig built by production designer Chris Seagers and with DOP Enrique Chediak’s minimal use of CGI, it all looks – and sounds – very real.

Even though we know the outcome, we do not know the details of what transpired on the rig, and here the fact that Williams was an adviser on the film lends authenticity to the chaotic action and individual experiences. For the audience, a moment in which Andrea and Mike must decide whether to burn alive at the highest bridge of the rig or jump into a black, burning, debris-filled sea, is one of those ‘you are there’ moments that can induce nightmares.

Authentic as the film is, for those who saw the excellent 2013 documentary Fire in the Night about the Piper Alpha disaster (which killed 167 to Deepwater’s 11), there is a sense of déjà vu. Moreover, while the loss of eleven human beings is a tragedy, the bigger tragedy, and scandal, occurred for 87 days after the blow-out of 10 April 2010. The pristine Gulf of Mexico was filled by 4.9 million gallons of oil. The loss of fish, fauna and sea birds is incalculable, while thousands lost their livelihoods.

You don’t make money by making movies about the environment, or dragging audiences through the issues of corporate responsibility and culpability, but these are the real legacy of the Deepwater Horizon tragedy.