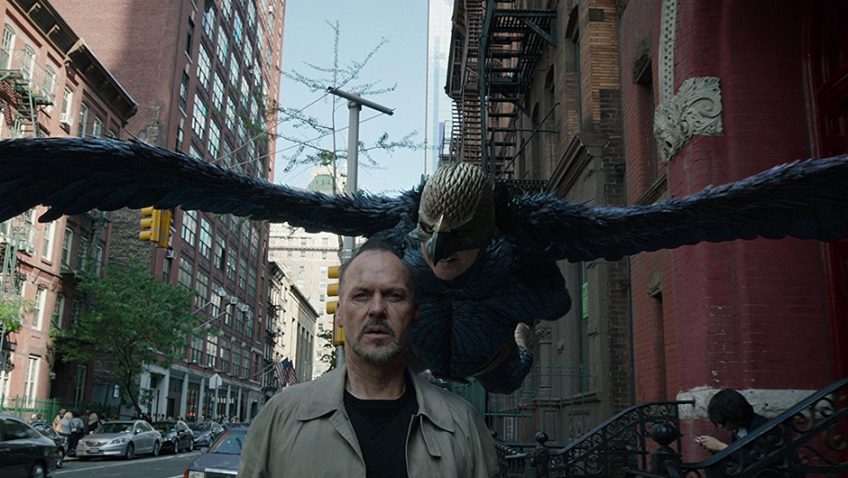 When he turned 50, the Mexican film director Alejandro González Iñárritu (21 Grams, Babel) decided to lighten up and try something completely new. He directed Birdman

and has been rewarded with 7 Golden Globe nominations, including best ‘musical or comedy’ Award.

Alejandro González Iñárritu shot to fame with his gritty masterpiece, Amores Perros nearly fifteen years ago, his films, Biutiful, Babel, and 21 Grams have been melodramas so dark, depressing and somewhat pretentious that could put people off. Iñárritu sheds the interweaving stories in different locations for a claustrophobic labyrinth in or around Manhattan’s St James’ Theatre.  To the drama, he adds wit and humour, with frequent referential winks (the title sequence being the first) to cine-literate fans

is a black comedy about Riggan Thomson, (Michael Keaton), a sixty-something former Hollywood superhero who, like Iñárritu, is also trying to make a big career change.  He has invested everything, and is about to remortgage his Malibu home, to produce, direct and star in his own adaptation of a Raymond Carver short story on Broadway. Emma Stone in Birdman or (The Unexpected Virtue of Ignorance)

It’s a bit of a family affair, which, far from helping, makes the lead-up to opening night even more frenzied. Riggan’s best friend, a nervous lawyer (Zach Galifianakis), is producing; Riggan’s younger girlfriend (Andrea Riseborough) co-stars; and his daughter Sam (Emma Stone), just out of a drug rehab centre, is the production assistant. Riggan’s ex-wife (Amy Ryan) visits the set.

When Riggan masterminds an accidental injury to rid him of an underperforming actor (Jeremy Shamos), Lesley, a Broadway neophyte (Niami Watts) recommends her former lover, Broadway’s rising-star Mike Shiner (the immensely talented Edward Norton) as a replacement. Shiner is a method actor and loose canon whose theatrical upstaging on and off stage contribute several laughs to the film and headaches for Riggan.  Cinephiles will know that Norton, one of America’s greatest character actors, once stooped to play ‘The Hulk’.

The most troublesome character, however, is one that is inside Riggan’s head. That said, in a touch of Iñárritu’s Mexican magical realism, he is also visible and audible to we, the cinema audience. So the nagging voice asking the key question, ‘How did we end up here in this shit hole?’ is the lure of Birdman, pulling at Riggan’s soul like the devil in a production of Faust. Edward Norton in Birdman or (The Unexpected Virtue of Ignorance)

The layers accumulate when you remember that 25 years ago, Michael Keaton starred in Tim Burton’s Batman, followed by Batman Returns.  Since then, his star has faded as rapidly as Riggan’s.  In addition to incorporating Keaton’s personal life into the life of the character he is playing, Iñárritu contrasts the art of theatre with that of cinema.

The film is shot in one long take (with some digital edits) as though we were watching a play on and off the stage-within-a-set. When the film opens in the dingy theatre dressing room Riggan, minus his trousers, is meditating, cross-legged a metre above the floor.  There is an in-joke here as the film’s cinematographer, Emmanuel Lubezki, won an Academy Award for ‘Gravity.’

asks some serious, but hardly original, questions about lost dreams, the burden or wisdom of change, and the struggle to reconcile age and aspirations.  It also contrasts the popular cinema that made Keaton and his alter-ego rich, with theatre and, similarly, the kind of art house cinema that Iñárritu makes. Iñárritu’s films typically gross $20 million compared to the $411 million that Keaton’s Batman grossed 25 years ago.

To some extent, Iñárritu leaves it open to the viewer to decide whether the over 50s can retain their creativity and start anew, or whether they are better off living off living in the past and, like Stallone and Arnie, make an attempted come back as action heroes. But the genuinely felt tour de force that causes the caustic theatre critic Tabitha Dickinson (Lindsay Duncan) to change her mind about the play is a movie stunt that cannot be repeated live on stage. It’s a one off.

Michael Keaton in Birdman or (The Unexpected Virtue of Ignorance)

This works as an ironic commentary on Riggan’s state of mind, but is also a first sign that Iñárritu’s film, for all its strengths, is not as tight and well thought-out as it might have been.  When Riggan says, ‘The play is starting to feel like a deranged, deformed version of myself’ we are reminded that one the film’s main asset’s is its ambiguous subjectivity, complete with the intermittent comments from Birdman himself.

Even if acknowledge Tabitha Dickenson’s satirical role, the confrontation scene in the bar seems more imagined than real with Riggan’s insecurities multiplying as opening night approaches. This is why the scenes without Riggan, in which Sam and Mike form a romantic attachment, feel so off-kilter.