Home / LIFESTYLE / REVIEWS > / FILM REVIEWS / Despite the great songs and story, Disney’s star-studded Beauty and the Beast is uninspired 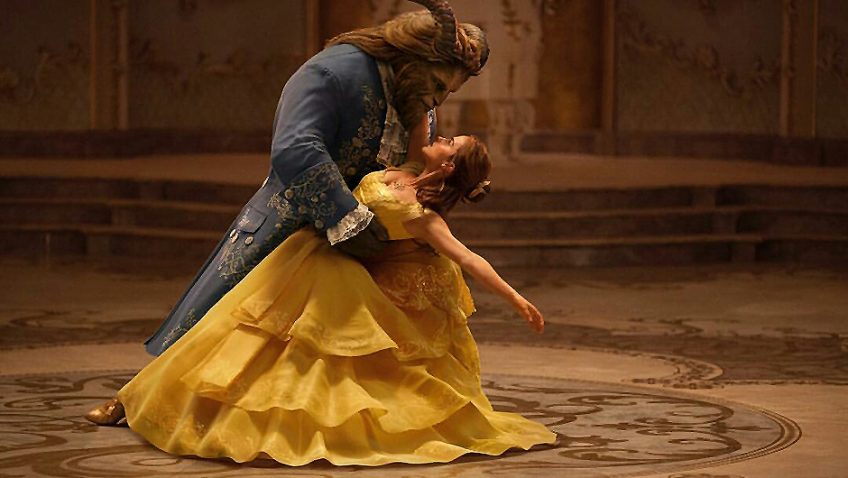 Despite the great songs and story, Disney’s star-studded Beauty and the Beast is uninspired

It might have been the success of Kenneth Branagh’s Cinderella (which grossed $543 million on a budget of $95 million) that prompted Disney to go ahead with the lavish, live-action movie Beauty and the Beast

, itself an adaptation of Disney’s 1991 hit animated movie, and subsequent successful stage musical.  But in a way, it was inevitable.

After all, a whole generation has yet to rediscover the story through Disney, and Alan Menken’s mostly wonderful songs from the animated film might not have been heard by an adult audience who have little interest in ‘children’s’ animation. In addition, there seems to be an increasing number of popular British and American actors who can sing reasonably well, including Harry Potter star Emma Watson (Belle) and Downton Abbey star Dan Stevens (Beast) – and who, like Luke Evans (Belle’s egotistical suitor, Gaston); Josh Gad (Gaston’s rakish sidekick LeFou); and Kevin Kline (Belle’s saintly father Maurice) are trained singers, having started out in stage musicals.

That being said, if you put aside four new songs added to Alan Menken’s excellent score (with lyrics by Howard Ashman and Tim Rice); Josh Groban’s heavenly version of Evermore over the end titles; and the courageous introduction of Disney’s first gay character, Josh Gad’s LeFou, there is nothing new about this production, except the amount of money thrown at it.  For with its budget of $160 million, Beauty and the Beast

is reportedly the most expensive musical ever made.  The money is visible on the screen, but sometimes, to a fault.  The cast reads like a Who’s Who in British and American talent, but did Ewan McGregor was probably cast as Lumière more for his name than his suitability for the role. 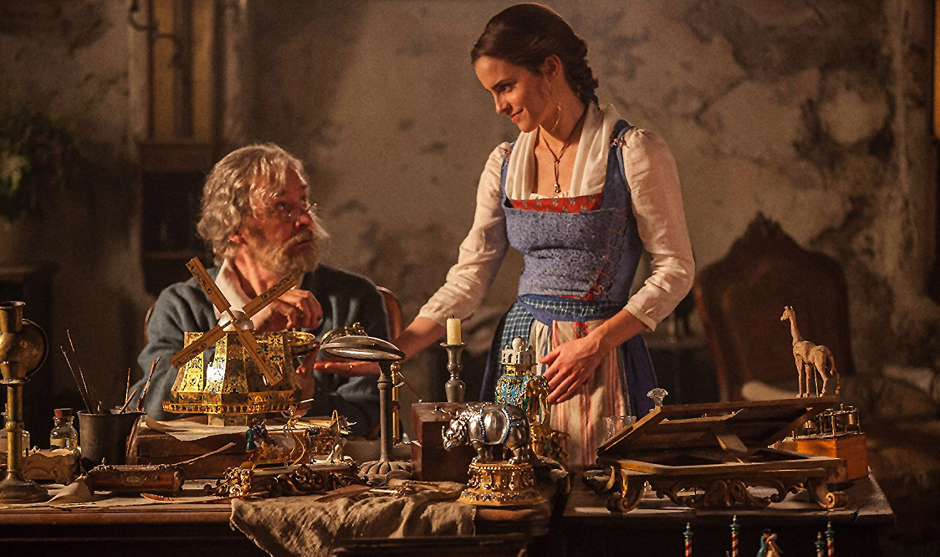 Kevin Kline and Emma Watson in Beauty and the Beast

Beauty and the Beast

will appeal to adults and teens for its romance and timeless moral and to all viewers for the costumes, atmospheric castle scenes and all the servants turned into furnishings by the same wronged fairy that cast the spell over the selfish, inhospitable prince (Dan Stevens) and turned him into a beast.  These include Mrs Potts (Emma Thompson), now a tea pot; her son, the chipped teacup Chip (an adorable Nathan Mack); Cogsworth (Ian McKellen), turned into a mantel clock and Lumiere (Ewan McGregor), now a candelabra.  There is also singer Audra McDonald’s opera-singing Madame de Garderobe and her husband, Maestro Cadenza, the court composer turned harpsichord (Stanley Tucci).  Though McDonald has a good voice, her Garderobe becomes headache-inducing  and her husband is a new and pretty forgettable character.

These loyal servants provide some entertainment and comic relief, but the big set piece, Be Our Guest, is staged in an anachronistic and over-the-top Busby Berkeley manner and goes on far too long.   And it is sung, or rather belted out, by four of Britain’s finest actors who are not known for their voices: Ewan McGregor, Emma Thompson, Gugu Mbatha-Raw and Ian McKellen.

Ewan McGregor and Ian McKellen in Beauty and the Beast

to miss the darkness and element of sexual tension that is so natural to the story. After all, in the 21st century as in Blue Beard’s day, a pretty, young virgin living alone with a beast, who was once an educated prince, is bound to leave you asking some questions.

The talented Bill Condon, who directed Gods and Monsters, Chicago, Dreamgirls and the last two instalments of Twilight, has the right credentials for this big musical but he debuted as a scriptwriter. Although he won an Oscar for Gods and Monsters and was nominated for one for Chicago, he did not write the script for this film.  The screenplay was instead assigned to Stephen Chbosky (who wrote the excellent coming-of-age comedy, The Perks of Being a Wallflower) and Evan Spiliotopoulos, who wrote Hercules and Tinker Bell and the Lost Treasure.  This is a sensible choice of writers, who complement one another, but the script is uninspired.

Not so Luke Evans, the villainous Gaston who hams it up superbly as does Josh Gad as LeFou.  His attraction to Gaston has caused the film to be prohibited to children under 16 without a adult in Russia, and has been censored in Malaysia unless Disney cuts out the offending shot. This, and a similar reaction from the state of Alabama, might explain why the Angela Carter influence is so subdued.

Luke Evans in Beauty and the Beast

But it does not explain other changes to the story.  In the original story Maurice is a merchant with a large family which explains why, when he is captured by the beast for taking a rose for Belle (as in the present story), he immediately negotiates with the beast. Assured that the child will be well cared for, he promises to send one of his children to the beast in his place if he is allowed to go home.  In the film, there is an awkward back-and-forth on Maurice’s very intelligent horse in which Belle rides to the castle to free her father and then locks herself in of the cell to set her father free.

What the filmmakers do retain and make clear is that Belle is not only a rare, literate female, but a bookworm.  She prefers a book to the vain, silly girls her age in the village and it is this that seals her relationship with the Beast.  Perhaps her knowledge of books is another reason why she is able to see through the flirtatious, knave, Gaston, assured that her values would make the two incompatible.

But it is a shame that this time around the filmmakers could not have figured out a way to make audiences aware – perhaps in the library scene where the Beast and Belle read together – that two women were behind the original folk-tale, written as a warning for young girls.   Novelist Gabrielle-Suzanne Barbot de Villeneuve was the first to publish the story in 1740, but the story which is credited as the underlying source of this film, is that of Jeanne-Marie Leprince de Beaumont from 1756.